WHAT IF SUPERMAN WAS REAL?

In recent weeks more information about the upcoming Superman movie, The Man of Steel, directed by Zak Snyder and starring Henry Cavill, has been released, starting with the above poster. My first thought was, that’s a very odd choice for a movie poster. Superman in handcuffs, surrounded by armed soldiers. What exactly is that supposed to tell us about the film? This is Superman, an American icon, yet our first new image of him makes him look like a criminal. It just seems like, right off the bat, this is the wrong tone for a Superman movie. I know that Christopher Nolan was tapped to oversee this new potential franchise, based on the huge success of The Dark Knight, but I worry that the lesson Warner Bros. learned from the success of that film, and the failure of the Ryan Reynolds-helmed Green Lantern, is that “dark” is the way to go with superhero movies. But Superman is not Batman. Superman should be bright and uplifting. A better poster for a Superman film would have been something like this:

Then, when the official trailer was released (see below), that just confirmed that this film is going for a darker tone. The trailer shows a lot of Superman’s feelings of alienation growing up, and the public mistrust that his appearance brings. I want to see this movie, but I can’t say that, based on what I’ve seen so far, I’m really excited about it just yet. The special effects look great. And, from the beginning, I was happy about Cavill being cast as the star, plus they’ve filled out the rest of the cast with top-level actors, so that’s good. But I just think that a Superman film should be more optimistic. The tone to go for should be less Batman, and more like Iron Man and The Avengers. Those first trailers were like WHOA!!! And that’s what I want for Superman. And I’m still not liking the costume design, mainly because it’s too dark. Superman should be in bright primary colors. Light blue suit and light red cape.

Anyway, while browsing a particular message board thread, some folks were discussing the issue of Superman being distrusted by the public, which I think probably is more realistic. One commenter said:

People love heroes and flock to messiahs. If an alien spaceship landed on the White House lawn, there would be mass celebrations and excitement. The human race is not nearly as suspicious or fearful as Hollywood thinks. So, far, the most accurate portrayal of the human reaction to an alien invasion was in INDEPENDENCE DAY, where the people went up on the roof and threw a party to welcome the aliens. If Superman appeared one day, he’d have 10000 Facebook pages and his face on a million t-shirts before the sun set.

I don’t think that’s entirely true. Let’s really look at who Superman is and, most importantly, what he can do. Superman can fly and move “faster than a speeding bullet.” He’s strong enough to “bend steel in his bare hands.” He’s invulnerable to anything Earth-made. Bullets, lasers, missiles, fire, bombs, etc., cannot hurt him. He can see through almost anything (except lead), he has super-hearing, he has heat vision. I’ll say that again, HEAT VISION.

He can shoot lasers from his eyes!

Not to mention super-breath, where he could freeze you to death just by blowing on you real hard. So if such a being like this existed in the real world? How would the public react? I think most people would fall into several categories.

1/Many people would immediately embrace him as “the Messiah”, and worship him. They would probably build churches/temples in his name, and form cults dedicated to him.

2/Probably just as many people would immediately denounce him as “the Anti-Christ” and hate him. And I think those two groups may end up overlapping quit a bit. As I think that some of the people who first worship him would eventually turn against him if he didn’t act the way that they think their “Messiah” should act. Then they’ll think he’s a false God.

3/Many people would indeed worship him, in a secular way, as a “celebrity.” I could see him being all over the covers of People, and US Weekly, and other tabloids. Leno, Letterman, Kimmel and Conan would all be trying to get him on their show, he’d pop up on The View, and stuff like that. But hero worship carries a whole other set of problems for Superman. People love to build up celebrities just to tear them down later. We live in an age where one thoughtless twitter post can cost someone their career. I think that as Superman continued to do good deeds, many people would begin to take him for granted, and then start to question him for the things that he didn’t do. After all, Superman can’t be everywhere at once. He sleeps sometimes and, as we know, has a personal life and a job as Clark Kent. But the public doesn’t know that, so I could see people asking “Where were you when that plane crashed, or that building was on a fire, or that terrorist attack happened?” And there would be public backlash against him for that.

4/FEAR. I think this is the most logical response. Sure, in the comic-book world, and the world of cartoons, video games, and movies, it makes total sense for the public to love and trust Superman, he’s one of the good guys. We, the readers, know that he was raised by his parents, The Kents, to be a good person, but in real life, why should we trust him? I’d be scared of a man with the powers of Superman. No matter how many good deeds he does, how many lives he saves, I would not be able to stop wondering, what if he ever just gets pissed off? Or what if just gets drunk? Who could stop him from doing whatever the heck he wants to do? I suspect that all major governments, including and especially the American government, since he lives here, would be freaking out at the thought of this living, breathing, sentient potential Weapon of Mass Destruction just flying around the world unchallenged. What if just starts overthrowing governments and taking over? We saw how in Superman II, the 3 evil Kryptonians burst into the White House and declared themselves the new rulers. I think a lot of folks would be worried about Superman doing the same thing someday. 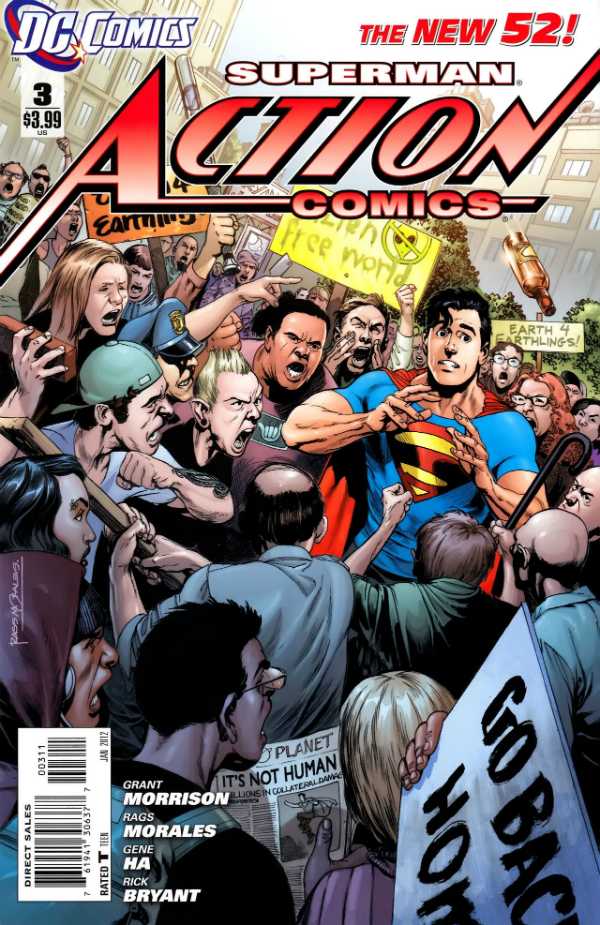 And this is especially true since he’s revealed that he’s an alien. An extra-terrestrial being, with virtually unlimited power. Just that knowledge alone would really freak people out, and would also cast doubt on his motives. For all we know, he could be doing all those good deeds just to lull humanity into a false sense of security so that the rest of his alien race can come and invade the planet.

And I think another potential reaction would be…

5/Disbelief. I think some people would just refuse to believe that he’s real, no matter what they see. They would think it was one big hoax, either by the government or some other entity. I mean, there are people today who think the moon-landing was faked. Not to mention all the other conspiracy-theorists for everything from Princess Diana’s death to the WTC attacks on 9/11. And, really, I’ve seen some pretty fantastic stuff in my life. I’ve seen David Copperfield fly, and walk through the Great Wall of China. I’ve seen Criss Angel walk up a the side of a building barefoot, levitate over Las Vegas, and walk on water. I’ve seen Penn fire a real gun directly at Teller, and Teller caught the bullet with his teeth. So seeing a man in a red cape flying in the sky could also be faked.

Of course, most of the stuff applies to other superheroes, too. Be it Green Lantern, or Wonder Woman or Spider-Man. Heck, imagine how scary The Hulk would be in real life! That’s why there’s a thing called “willing suspension of disbelief” that most readers use when reading comic-books, or watching films about heroes, you just have to mentally accept these various conceits of the genre, to go along with the story. Over the years, many writers have done stories that put superheroes in the “real world”, the best of which, in my opinion, is SUPERMAN: SECRET IDENTITY by Kurt Busiek. When done well, it can be a great story. But it’s not how I’d want all comic-books writer. And I’m not sure that’s how I’d want a Superman movie to be written, either.