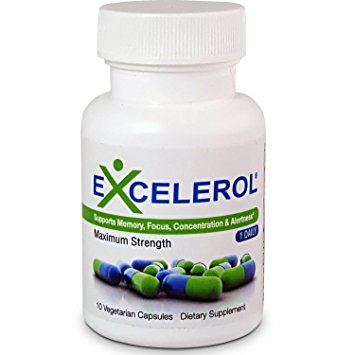 So, picking up from where I left off, now here’s the part you’ve all be waiting for, what is MY personal experience using Excelerol?

I got my first pack on Friday, Feb. 8th, at my job in the morning. First I did the water test that I do with all new pills when I try them the first time, I took 1 and put it in a cup of water to see if it dissolves, and how long it takes. This is to see how long before it should enter my system. Within half an hour, the pill was completely dissolved.

I should note that I also gave one pill to one of my coworkers, asking him to let me know if he felt anything. Also, the next day, I gave two to my brother, which he took that afternoon, to see what he thinks. So that left me with 86 pills for myself, out of the pack of 90.

Also, I just tossed the Nuerodigital Pill Dispenser out, no need for that.

I took my first two pills at 1pm, right after lunch (I hadn’t read the instructions on the box that said it was best on an empty stomach yet, that’s why I took it after eating ). I didn’t take any more that first day, since I didn’t know what kind of effects I would get, and I didn’t want to risk it disturbing my sleep later that night (according to the box, it’s supposed to last “up to 6 hours”).

Then, starting the next day, I took four a day. Two in the morning, soon after waking up, and then two in the afternoon. I spaced them out over 6 hours. So the time varied a little based on when I woke up. I always tried to take them on the hour, or half hour, in order to make it easiest to remember when to take the pills again. So, during the week, I either took my first two pills at 6am, 6:30am, 7am, or 7:30am, in which case I would then take my next two pills at 12pm, 12:30pm, 1pm, or 1:30pm.

On weekends I would often sleep later, staying in bed sometimes up til 9-9:30am, and would take the first pills then, and then the next two 6 hours later. One exception was on Saturday, Feb. 16th, I took 3 in the morning (I don’t recall why), around 8am, and then I took 1 more pill around 2pm. But my general routine from Feb. 8th to Feb. 17th was two at a time, twice a day

Then, beginning on Monday, Feb. 18th, I decided to start taking 6 a day, spread out 4 hours apart. So, for example, if I took my first two pill at 6am, I’d take two more at 10am, and then two more at 2pm. And that was my routine up until today, March 2nd.

Yes, I still have enough left over to last another couple of weeks, if I continue to take 6 a day, and I originally planned to wait until I’d used them all, and then write a review but, y’know, today marks 23 days of regular use of Excelerol, and I think that feels like enough for me to give a well-informed, fair and balanced review of this product. Especially when you consider that if I hadn’t bought a 2nd pack, and just stuck with taking 4 pills a day beginning on Feb. 9th, today would be the day that I ran out. So I’ve basically used an entire pack already. Thus, my verdict:

THEY DO NOT WORK.

These pills did NOTHING for me. Nothing at all. I still got that the late-afternoon “BLAH” feeling that I often get during the week and, in general, I got NO feeling of “alertness,” nor have I felt even the slightest increase in memory or concentration (I still made the same amount of dumb little mistakes at work, as I always do). Nothing. It just didn’t work. I might as well have been swallowing tic-tacs, for all the effects I felt.

The one and only time I felt anything after taking the pills, was the day I took 3 at once, in the morning. Within half an hour I felt a bit of a flush feeling, and rapid heartbeat, same as when I’ve had too much caffeine. It actually felt pretty bad, and so I had to lay down again for a little while until I felt better (luckily, this was on a Saturday).

So there is clearly something in these pills that are designed to affect people, they’re not just placebos or anything like that, but for  “maximum strength” pills, which is supposed to last “up to 6 hours”, I find them extremely lacking.

Also, the coworker who took 1, and my brother who took 2? They both said that they did not feel anything. So take that for what it’s worth.

So, therefore, in my opinion, based on my own experience with the product, I would not recommend Excelerol to anyone.

As noted, there are plenty of customers who claim that it worked for them, and I’m not discounting all of them, these types of pills, be they prescription or Over The Counter do often affect people differently. I used to take store-bought Melatonin to sleep, I remember once I gave some to a coworker, who happens to be a lot shorter and skinnier than me (I’m 6”2”, around 210 lbs.), and he was saying how one pill knocked him right out, while I had to take 4-6 of those same pills, and it would take about an hour before they kicked in. But, in this case, I took what’s considered the maximum amount, on a daily basis, for weeks, and to not feel anything? That is just not worth it.

So if anyone out there is considering trying this product, and they asked my opinion, I would have to say DON’T BOTHER.