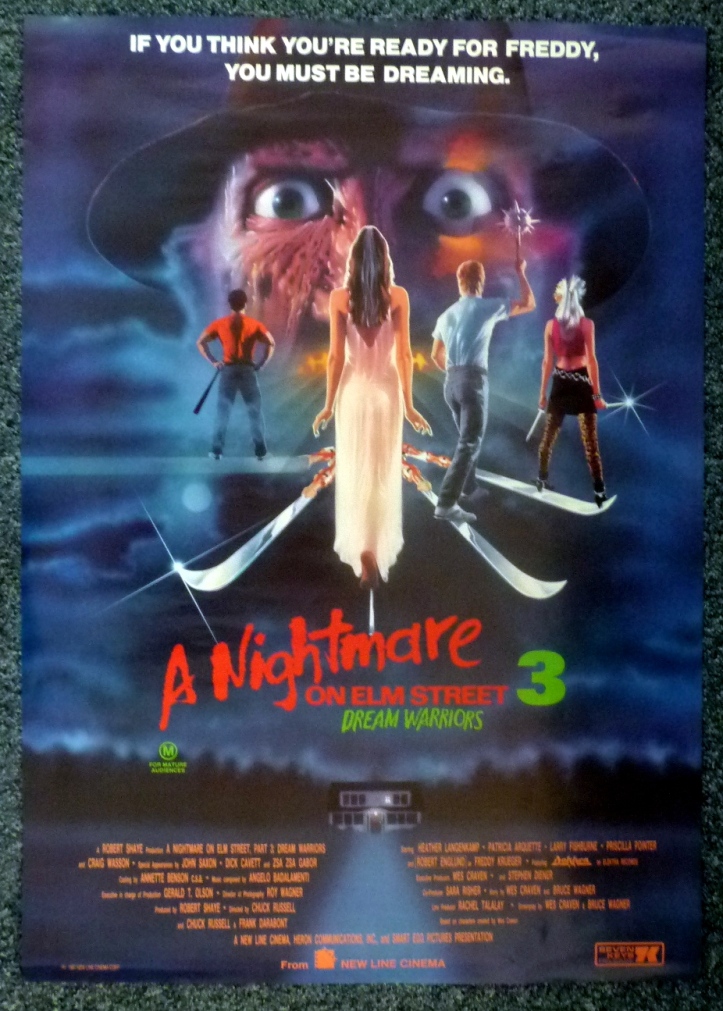 Despite the critical disappointment of A Nightmare on Elm Street 2: Freddy’s Revenge it was a financial success, proving that there was still interest in the property, so New Line Cinema proceed to get to work on another sequel. This time they managed to get Wes Craven back to help work on the story, although he’s not the sole creative force. No mention is made whatsoever of Jesse and the events of the previous film (which is probably for the best).

Taking place a year after the previous film (which took place five years after the first film), Heather Langenkamp returns as Nancy Thompson, who is now some kind of therapist specializing in counseling teenagers. It’s not mentioned exactly how she survived the events of the first film but we do learn that she’s been taking an experimental drug called Hypnocil which prevents people from dreaming. She comes to work at a psychiatric hospital called Westin Hills with Dr. Neil Gordon (Craig Wasson) who is treating a group of six teenagers who all have various behavioral problems resulting from repetitive nightmares. Kristen (Patricia Arquette), Philip (Bradley Gregg), Kincaid (Ken Sagoes), Taryn (Jennifer Rubin), Joey (Rodney Eastman), Will (Ira Heiden), & Jennifer (Penelope Sudrow) are the teenagers, and after Nancy discovers that Freddy is behind their dreams, she reveals to them who he was and that they are “the last of the Elm Street children,” and that’s why Freddy is coming for them now. But now they have a secret weapon in Kristen, who inexplicably has the power to mentally bring people into her dreams, so that they can all share the same dream at once. And in their dreams they all have special abilities that they can’t do in the real world, like super-strength, fighting skills and special agility. So, after some have already been killed by Freddy, the surviving children and Nancy all plan to enter the dream-world together and team up to fight him.

Meanwhile, Dr. Gordon has encountered an old nun called Sister Mary Helena (Nan Martin), who tells him Freddy Krueger’s secret origin. Decades ago a young nun named Amanda Kruegar was accidentally locked in Westin Hills back when it was an insane asylum over a Holiday season, where she was then repeatedly gang-raped by the crazed patients. When she was finally rescued she was pregnant, and Freddy (“the bastard son of a hundred maniacs”) was born. She also tells him that the only way to stop Freddy is for him to be buried on holy ground. So Dr. Gordon tracks down Nancy’s father, who is once again played by John Saxon, because he’s the only one who knows where Freddy’s bones were hidden after the mob torched him, so they can gather them up and bury him. The film comes to a satisfying conclusion (after one very clever fake-out) and, despite one little hint at the end, serves as what could have been a pretty definitive ending to the Nightmare on Elm Street saga (which I’ve read that Craven, who never thought there should be any sequels in the first place, intended it to be).

Once again New Line assembled a great cast of actors, in particular I have to single out Arquette as Kristen, who pretty much takes over the role of “final girl” from Nancy in this film, and plays her well with vulnerability and strength. But all of the kids were good, as was Wasson, and Langenkamp hadn’t lost a step, playing an older and more mature version of Nancy, easily stepping into the mentor role. Laurence Fishburne has a supporting role as an intern at the hospital, but doesn’t make much of an impression here. Priscilla Pointer (whom I best know for her role as Rebecca Wentworth on Dallas) does make an impression as Dr. Simms, the arrogant head of Westin Hills who disapproves of Dr. Gordon and Nancy’s methods and thwarts their progress.

The backstory to Freddy as well as the revelation of the Sister Mary Helena’s identity were are nice additions to the Elm Street mythos. The special effects were much farther advanced, as well. It’s no wonder that among Elm Street fans this film remains a critical favorite, with many even considering it the best in the series.

However, I can still nitpick a few details. First, while the the death scenes are more elaborate thanks to the increased special effects, they do have the unfortunate side-effect of de-mystifying Freddy to a degree. He’s no longer regulated to the shadows here, he’s now often seen in full lighting. Instead of being that scary figure chasing you in the dark, now he’s creating fantastical scenarios to kill the kids, liking changing into a giant snake-head to eat one, or being a giant puppet-master leading one kid to the top of the building and making him jump off, or even just when he suddenly has drug-needles on his fingers, and creates little sucking mouths in one girl’s arms, so he can give her an overdose. And of course there’s the infamous “Welcome to prime time, bitch!” moment as he smashing one girl’s face into a television. With each successive sequel Freddy become more and more about the wise-cracks and one-liners, with filmmakers forgetting to even try to make him “scary,” and some later films almost felt more like action/comedies than horror films, but that progression began with this film. It’s not too bad here, especially if it was considered to be the ending, compared to later films, but it’s there. It also continued the angle from the last film of Nancy’s old house in Springwood, 1428 Elm Street, being significant to Freddy in some way, as Kristen kept seeing the house in her dreams and even built a little paper-mache replica of it, despite never having been there in real life. And the scene where, after they recover the bones, Freddy’s skeleton comes to life and attacks Dr. Gordon and Lt. Thompson was kind of silly.

Nevertheless, despite those things, this is a very good movie, and my 2nd favorite of the franchise after the original, still worth watching today.