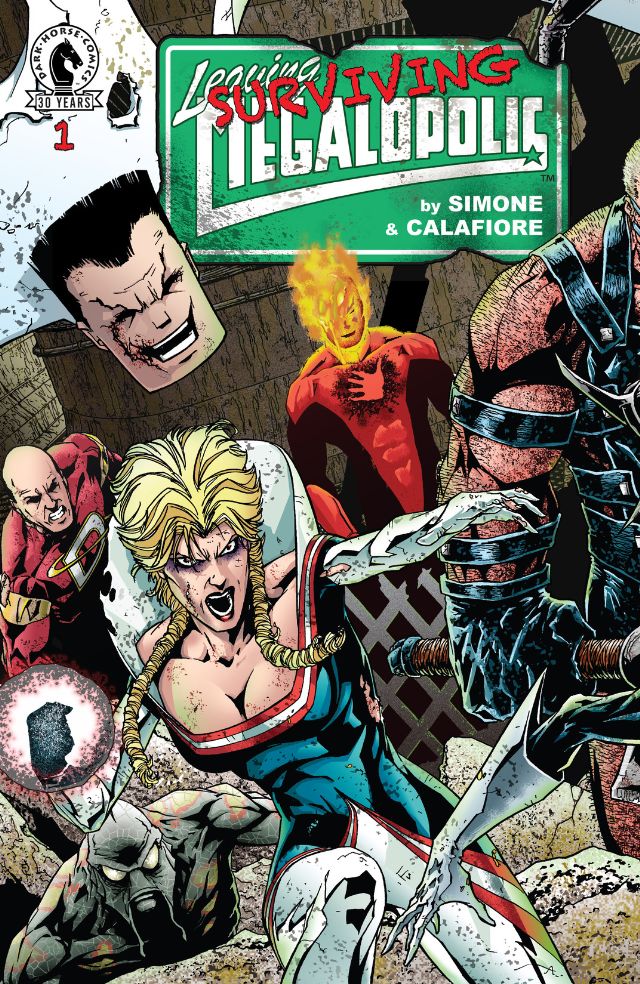 It’s back! I loved the original graphic novel, which began as a Kickstarter project, has now returned in a new sequel series!

Now, first, you need to read the original book before reading this series. If you’re a newbie to this world, this is not the place to start. Heck, I had to reread it before picking up this issue, just to re-familiarize myself with the characters. And while I always try to avoid major spoilers of the comics that I review, I will need refer to events that would be considered spoilers for the OGN. So, again, go get that and read it first.

Okay, so it’s a month later, Megalopolis has been “quarantined.” The U.S. army is still guarding the remains of the bridge to keep anyone from getting out, although it doesn’t appear as if any of the now-insane superheroes have any interest in leaving (not even the ones who can fly). Southern Belle has assumed leadership of the heroes, and the story opens with her leading a bunch of the other heroes to retrieve the remains of Overlord, whom she believes that he can be revived. They successfully fish his body out of the ocean, but it’s unclear what state he is in, or what Southern Belle’s plans are (beyond “screwing his brains out”).

Meanwhile, we see that Mina has indeed survived the events of the previous story. Outside, she is presumed dead, and because of her actions, as revealed by the survivors whom she helped escape from Megalopolis, she’s considered a public hero, a martyr. She’s now in some kind of costume of her own, and she’s in hiding in the ruins of the city, and notices she’s being stalked by another costumed figure, a superhero called The Crimson Shadow. The two of them confront each other in an abandoned comic-book store that Mina used to frequent in better times. This leads to a surprising confrontation (or two).

On the outside, Harold is approached in a bar by a man who claims to be an ex-soldier, who says he’s been hired by a wealthy woman to lead a team into Megalopolis to search for and rescue the woman’s husband, who was in Megalopolis for a brief meeting when everything went nuts. The man, Bennet, wants Harold to come with them, because they need someone who knows the city, and he promises that they will also look for Mina.

So this is a good set-up issue, which catches us up on the events of the OGN and introduces several plot-lines which can further this story. And the artwork is just as wonderful as before. Simone and Calafiore make a great creative team, and I’m glad they’ve reunited for this sequel.