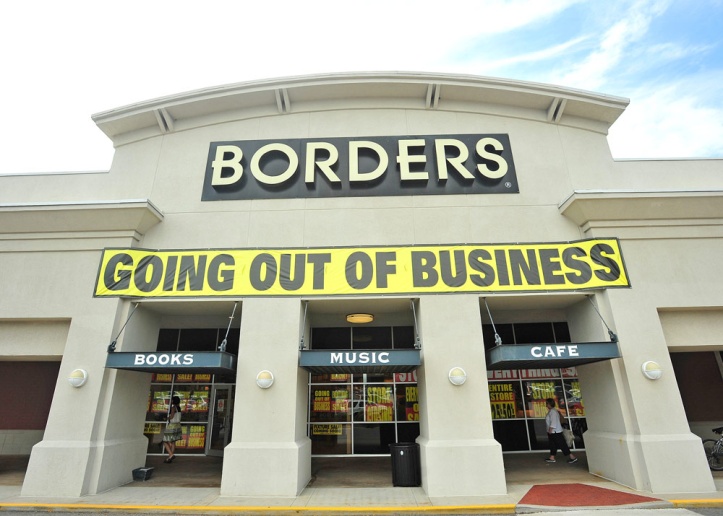 I’ve seen in the news that Borders is filing for bankruptcy.

That’s a shame, and also a sign of the times. First, folks just don’t read for fun as much as they used to. I grew up reading, always loved it. My mother instilled the love of reading in me at a very young age. I read comic-books and regular books, and still do. My tastes may have changed over the years, but I was always reading something.

Fantasy books like Alice’s Adventures In Wonderland/Through The Looking Glass and the original OZ series by L Frank Baum were some of my childhood favorites. Also liked the Narnia series and Lord of The Rings trilogy. I later become more interested in science fiction, such as Douglas Adams’ Hitchhiker’s Guide To The Galaxy series. Then there was a point in my life where I was primarily reading biographies and autobiographies of historical and famous figures. I’ve read books about everyone from Malcolm X to Malcolm Forbes. The two that I’ve read the most about are Muhammad Ali and Bill Gates. I’ve probably read 7 or 8 books about each. I was also reading as much as I could about Julius Caesar and The Roman Empire for awhile. I’ve also read dozens of books on various religions, including all the Holy books. I’ve read the Bible, Qu’ran, and even The Book of Mormon, as well as a collection of the sayings of The Buddha, among many others. Currently I’m reading a book called The Facebook Effect, the story of how Mark Zuckerberg and his partners created Facebook. So far, it appears to be a much more balanced view than the movie The Social Network was.

But folks don’t seem to make time for reading these days. Especially kids. Ever since he was little I’ve been trying to get my Godbrother Brian to read. I’d always bring him comic-books, hoping that would stimulate him like it did when I was little, but to no avail. He’s 16 now, and I’m not even sure he knows how to read. But he can spend hours playing video games.

I think another thing that impacts these types of bookstores is the digital age. Not just ebooks, but also online retailers. Truthfully, I can’t remember the last time I was in an actual bookstore. For the past few years I’ve been buying most of my books online, usually via Amazon.com, but also Ebay. What’s great was that I could also find good deals on used books. Sometimes on Amazon I’d find a book I want for one cent, plus $3.99 shipping. It’s so convenient. I also figure the same thing, plus services like Netflix, is what has hurt DVD stores.

Then last August I got an Amazon Kindle for my birthday. Wow. This thing is awesome. I was someone who was always skeptical about ebooks, but I have been surprised at how easy these things are to read. It’s really not much different from reading on paper. Since then, my older brother has gotten one too, and my mother has gotten a Nook. So this family of readers has been converted. Not that I’ve totally given up on print books yet, don’t know if I ever will. Not every book I want is available as an ebook yet, and sometimes it’s still cheaper for me to buy a used copy of the printed book than to buy the ebook. But when it’s available and a good deal this is incredible. Just look up a book, push a button and a minute later, there it is, ready for you to read! I think that’s definitely the wave of the future.

I’ve learned that misery does not love company.

I wish I’d learned how to speak Spanish. Living in Southern California, that has become increasingly neccessary.