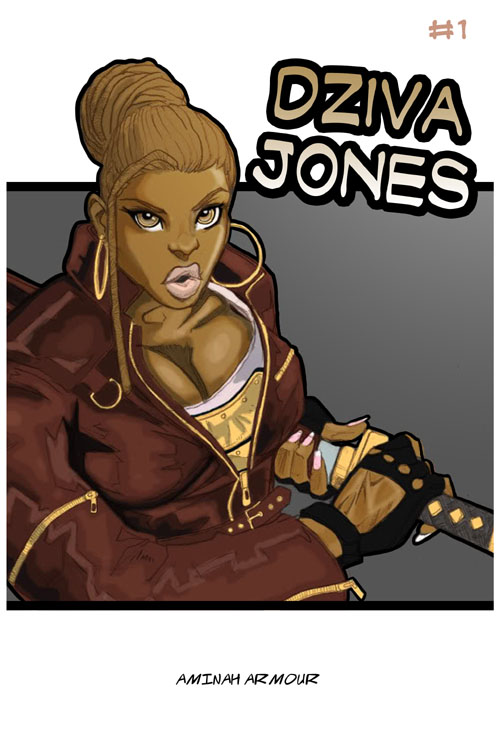 This little gem is like a preview book, with just 9 pages of story, which sets up the status quo of the character. Dziva Jones was created by Aminah Amour, who wrote this issue, as a Black heroine that stands out from the rest. As the text on the inside of the front cover says:

I’m a young, educated, Black woman whose a little on the thick side. You don’t see that in the media.

Dziva lives in Chicago. She makes reference to having some kind of powers, but exactly what those powers are is not made clear in this book, other than what appears to be some type of precognition. The books opens with Dziva talking to a crazy old man who’s sitting on the steps outside her apartment. The old man tells her of some trouble that’s coming, involving a little girl named Rachel. Dziva then goes inside to take a nap on her couch, while we cut to a scene of Rachel, a little Black girl walking down the street. Two White women, whom Rachel identifies as The Barbie Twins, pull up next to her in a car and tells Rachel to get in. Rachel runs while trying to call for help on her cellphone, but one of the Twins catches her, they knock her out with a needle and take her away.

Back at her home, Dziva seems to sense that Rachel is in danger, runs to the scene of the kidnapping, and finds the cellphone which had dropped to the ground, and sees a picture taken with it that shows the faces of the Barbie Twins. Dziva calls a local police detective, to let him know what’s going on, and informs him that she’s about to get involved. Along the way we get hints of this being part of a larger human trafficking ring.

There’s definitely a good premise here, which could be better when fully developed. Armor’s enlisted an impressive batch of talent to help her out with this issue. The interior art is by Ashley A. Woods, who does a fine job. The front cover is drawn by Stanley Weaver Jr., who also draws a black & white sketch in the back, and the inside cover art is by Charlie ‘Fab’ Goubile, creator of Blackbird. Plus another black & white sketch by Stacey Robinson aka Blackstar

That’s pretty much it. Like I said it’s just a preview issue. So it’s kinda hard to judge, in comparison to a full comic. But I give it an “A” for Effort.