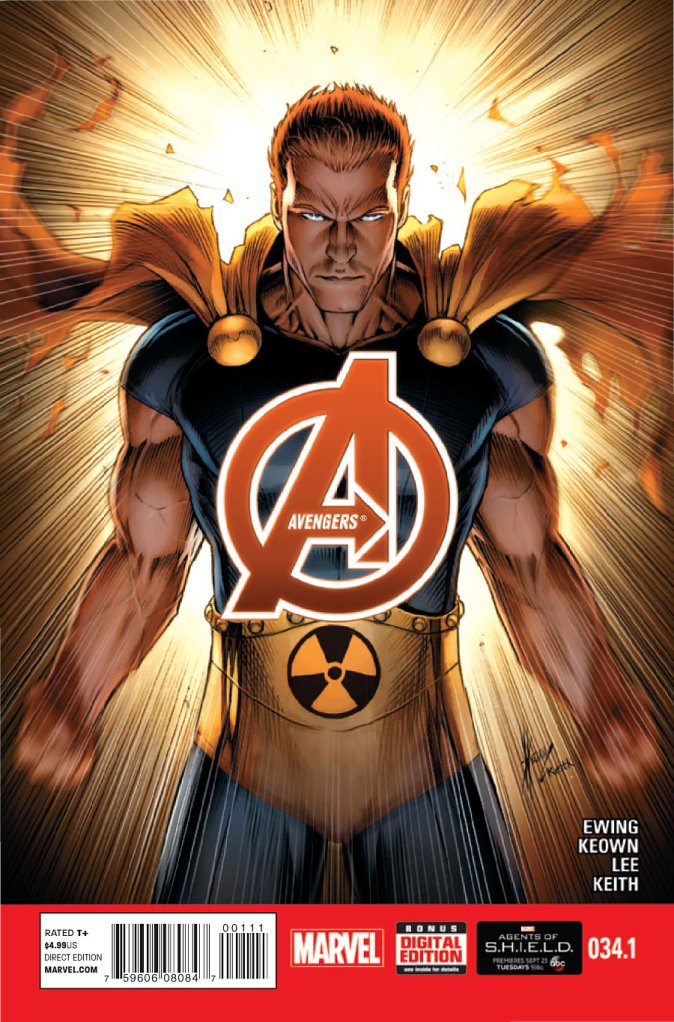 First off, let me state that I have not been reading this ongoing Avengers series, so I have no idea what’s been happening in the previous 33 issues (nor do I know why this issue is number 34.1). I just got this one because it’s a single-issue stand-alone story featuring Hyperion, a character that I’ve long been interested in.

To summarize, Hyperion is a superhero from a parallel reality that is intentionally similar to Superman. Decades ago Marvel created a knock-off version of the Justice League called the Squadron Sinster, of which Hyperion was a member, for the Avengers to fight. That team turned out to be popular with the fans, so Marvel later introduced another version of this group from a different parallel reality, except these were good guys, called the Squadron Supreme. Over the years both good and evil versions of the team made several appearances in various Marvel comics (like SQUADRON SUPREME: HYPERION VS. NIGHTHAWK) fighting with or against Marvel superheroes, including many other versions of Hyperion introduced from other parallel realities. This is the latest one. All I know is that his entire universe was destroyed and he was the sole survivor, left floating in the emptiness of unreality, until he was somehow brought to the mainstream Marvel universe where he joined The Avengers. So here we are.

“The World In His Hands”

The premise of the story is rather simple. A 5-year old boy has been abducted by a former supervillain called The Mauler (apparently he is an old foe of Iron Man). The boy is The Mauler’s long-lost biological child who the mother gave up for adoption when he was born. Now The Mauler claims to be reformed and is taking his son away to raise him and be a good dad. But when we see The Mauler brutally murder a policeman who pulled him over for speeding  it’s clear that he’s not quite as reformed as he claims. Hyperion appears at the boy’s home when the adoptive parents are talking to the police (he just happened to randomly be flying nearby when he heard the mother crying) and offers to help search for the boy himself.

What I love about this story is not only the way writer Al Ewing writes Hyperion, but also the way he writes the world around him. When Hyperion first appears in the family’s home, both the parents and the police are scared of him, even though he assures them that he’s just there to help and the mother even recognizes him from TV. But a being with that kind of power is still going to make “normal” people  a bit uneasy in his presence.

But the best part is the way, through Hyperion’s inner monologue, he describes the use of Hyperion’s powers. When Hyperion uses his microscopic vision to search the family carpet for clues it’s written as “I look deeper, peeling back layers, millimeters, micrometers.” When he leaves the home to begin his search he thinks “I hear the sound of muscles relaxing, the scrape of the officer’s finger being taken off the trigger.” And as he flies “I will my body to move through space.” It’s all very clinical but also poetic, reminiscent of the early writing of Alan Moore.

Through flashbacks we see why this particular case resonates so highly with Hyperion, as he remembers his own adoptive father who raised him and taught him right from wrong, and Hyperion’s grief about being unable to save his own universe. And then there’s the ultimate confrontation with The Mauler which reveals a few more twists to this story. And the end, where Hyperion comes to terms with his place in this world, is both optimistic and perhaps ominous (I won’t spoil it, but when you read the final page you’ll see what I mean), depending on how the character moves forward from this.

I’d be remiss if I didn’t also mention the clear expressive artwork of Dale Keown. I was a fan of his ever since the original Image Comics days, when he was drawing his creator-owned title, PITT. I’m not familiar with what he’s been doing recently, but this issue shows that he hasn’t lost a step.

This is one of the best single-issues I’ve read in years. It is completely accessible, you don’t need to have read any previous appearances of this character or even of The Mauler, all you need to know about them is revealed in this one story.  After reading this I would love for Al Ewing to either write an ongoing Hyperion solo series for Marvel or for the PTB at DC to snap him up and let him write Superman. I highly recommend this.