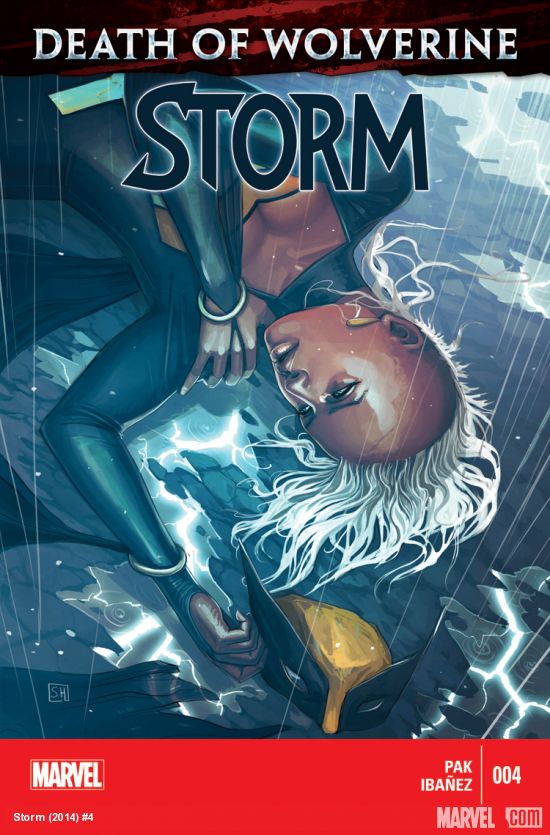 The cover has a banner that says THE DEATH OF WOLVERINE across the top, which had me worried at first that this would be part of a crossover, and since I’m not currently buying any other X-Men or Marvel titles, I didn’t want to feel lost. Thankfully it wasn’t really too bad, although there was definatly some information missing for a new reader like myself.

All I know is that Wolverine recently “died” somehow (but who cares, because you know he’ll be back eventually). This story begins in the immediate aftermath, with Storm and Beast flying home in one of the X-Men jets. There’s some bit where Storm uses her weather powers to create lightning as a tribute to Wolverine, which I didn’t really understand. I can’t tell if this story is trying to imply that she and Wolverine were closer than just friends, but Storm is devastated by his death. Back at the X-Men school Storm goes into Wolverine’s old office to reminisce and finds his smartphone on his desk, checking it and seeing a recent text message from a woman named Yukio, asking him to come down to Vegas.

So Storm flies to Vegas herself and meets Yukio. I don’t know who Yukio is, but she’s someone who had a long history with Wolverine and Storm knows her as well. Storm has to inform Yukio that Wolverine is dead, and then we find out that Yukio is part of some kind of underground mutant/supervillain crime mafia. She’s in Vegas for an annual meeting with the heads of the other crime families (or “clans”, as they call them) and they meet to divide territories or something. Wolverine usually would accompany Yukio to these meetings as her bodyguard, and so Storm agrees to take his place. She’s not happy being around criminals, but Yukio explains that the way they’ve been working together they’ve managed to refrain from violence, and that Wolverine understood that it was for the greater good. One of the other clan leaders is a Black supervillian named Moses Magnum, who I do know from other comics. But during the meeting Moses and another clan leader can’t reach a civil agreement, so the way they settle disputes is by each clan putting up a super-powered champion to fight to the death in an underground gladiator arena. During the fight, Storm is appalled and eventually joins in to put an end to the fighting, and that’s when things get risky…

Like the previous three issues, this issue ends with TO BE CONTINUED but this is the first time that it really is a cliffhanger. However, when I finished this comic I realized that I really don’t have any interest in the outcome of this story. That’s probably evident by my rather lackluster summarizing of the events in this book, but I just wasn’t engaged at all. Greg Pak does a fine job with the writer, and returning artist Victor Ibanez is likewise capable, but I think this book just isn’t for me. I was never major fan of Storm as a single character, but I gave this book a shot since she is Marvel’s premier Black female superhero, so I wanted to see how well she was handled. And I was able to stick with the book until now as each issue was a self-contained story. But now that it’s getting into continuing stories and tying into events in other X-Men comics which I don’t read, I’ve lost interest. But you can’t say I didn’t give it a fair shot.