Giving Up On Your Dream? Part 2: Electric Boogaloo

This is a sequel to a post from last month: Giving Up On Your Dream? So click the link and read that first, if you haven’t already. Then come back here.

I’ve discussed this subject a few times with people in real life since then, where I’ve had to elaborate on my stance. I do think having a dream and being willing to pursue it is a good thing. I’m not saying people shouldn’t. I’m just saying that there is a certain amount of realism that needs to be included. You need to be aware of exactly what it entails to follow your particular dream, what the risks are and what you will be required to do and possibly sacrifice in order to achieve that dream. I say this because a lot of people have unrealistic expectations about success. A lot of successful people (especially celebrities) look like they have it easy, but many so-called “overnight success'” are actually the result of many years of hard work. Don’t think you can just get on a bus to Hollywood and become a major movie star after your first audition, because for every person that may have happened to there are thousands more who toiled for years before getting their big break, or just never did make it. Or look at professional athletes. Take the NBA for example. They only have 30 teams, each with 12-15 active players at a time. So that’s at maximum 450 professional basketball players in the U.S.. Yet there are millions of boys playing basketball in high school right now, dreaming of playing in the NBA when they grow up. But the numbers speak for themselves. The vast majority of them simply will not make it, because there just isn’t room for all of them. So it would be prudent for most of those boys to have some other plan in mind, just in case. 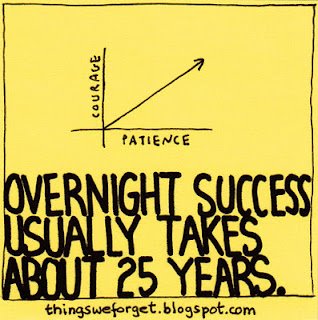 So this is where realistic expectations comes in. You need to truly be realistic about what you can do and what risks you are willing to take. This is not easy, because there is a fine line between realism and self-doubt. You don’t want to talk yourself out of something, or let others talk you out of it, just because it’s hard or because of the odds. Yes, there ARE people out there who will try to kill your dreams for selfish reasons. You need to learn to recognize those people, and separate them for those who are legitimately trying to help you. And you don’t want to make excuses for yourself, just because you’re afraid of failure. You need to learn the difference between that and being prudent.

To you use myself as an example. My dream as a teenager was to be a rapper.

My rap-style was a cross between early LL Cool J and The Fresh Prince (Will Smith). I was either rapping about how dope a rapper I was, or telling funny stories. The furthest I got was a meeting with an A&R rep at Geffen Records when I was 17. I didn’t get signed, but continued rapping for another few years, making and sending out demo tapes to other record companies, giving up around age 20. Sometimes I wonder, did I give up too soon? Could I have made it if I’d tried harder? And if I had made it would I have had a long career and still be a big star today, or would I have had a couple of hits and then ended up a washed up Has-Been, like the dudes from Kriss Kross? There’s no way to know, so I don’t bother with regrets.

But what if I decided to try again today? This whole “working for a living” thing is getting boring, I want to be a rapper! Could I make it today? Well, sure it’s possible, but what are the odds? There are options today that I didn’t have as a teenager. I could use my phone to record videos of myself rapping and upload them to Youtube and Instagram, to try to build a “buzz”. But still I’d probably need to quit my job in order to do a lot traveling, meeting other rappers, DJ’s, and producers, and performing at clubs. And here’s another sobering fact: I’m 37. Rap generally is a young person’s game. There are older rappers that are still hot today, 50 Cent is 39, both Eminem and Jay Z are over 40, but the difference that they all began their careers when they were younger, so they’ve built up loyal fanbases. But I’d be starting late, which would put me at a disadvantage, as most managers and A&R reps would probably feel better investing in a rapper in his early 20’s than someone like me. So to make this decision I’d have to take an honest look at myself and ask: how good am I? I haven’t even tried writing a rap in years, but looking back at my rap days I was definitely good at the time, but I don’t know if I’d call myself great. Comparing myself to guys like Jay Z and Eminem I was nowhere near as good then as they are now. And I think that taking into consideration the disadvantage of my age, I couldn’t just be a good rapper I would have to be INCREDIBLE in order to stand out from the crowd. Otherwise, I think the risk is just too great. I could spend several years struggling to be a rapper and the next thing you know I’m an old broke wannabe rapper with no job.

Not a good idea.

But that’s me. If you have some big dream you want to accomplish, I’m all for encouraging that, as long as you go into it with your eyes open.