Another retro-review for tonight! Jimmy Olsen is probably the 2nd-most famous sidekick in comic-book history, after Robin. The character was so popular that for 20 years, from 1954 to 1974, he starred in his own comic-book series, “Superman’s Pal Jimmy Olsen“, which reached 163 issues. In 2011 DC Comics published this special 70-page one-shot issues features some of Jimmy’s modern-day adventures.

The title of this story, which is broken up into 7 chapters, is JIMMY OLSEN’S BIG WEEK. At this point in the comic-book continuity (pre-Nu52), the premise is that Superman has disappeared, and no one knows where he is or if he’ll ever come back. During this time, Jimmy has gotten lazy, he’s not as adventurous as he used to be. The story opens with a flashback of Jimmy facing an evil genie, and being saved at the last minute by Superman, whom Jimmy covertly signaled. That is a good sequence to show Jimmy in his traditional “Superman’s Pal” role. Then jumps ahead to the present and Jimmy’s current more boring life. This issue is notable for being the first official comic-book appearance of the character Chloe Sullivan, who was introduced on the TV show Smallville, played by actress Allison Mack.

We learn that this version of Chloe is a reporter for an entertainment website and that she and Jimmy were dating but that she has recently dumped him due to his lack of motivation. He claims to be fine with it, but is clearly still carrying a torch for her. A couple of his friends take him out to a club that night trying to get him to have some fun again, and then we’re introduced to another new character named Sebastien Mallory.

Not only does he steals Jimmy’s table at the club, but he’s apparently got eyes on Chloe, who is following Sebastien for a week in order to write a profile on him for her website. So the clear rivalry is set, barbs are thrown but this comes to a halt when an apparently alien armada arrives in the skies above Metropolis! 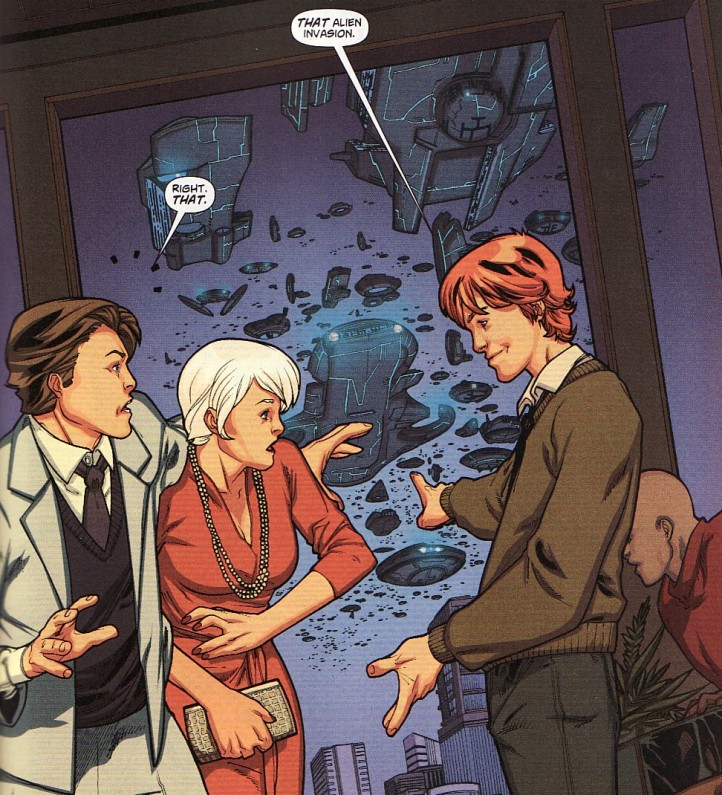 That’s just page 11, by the way. We’ve still got 59 pages to go. I don’t want to spoil any of the goodness, so I’ll just give the broad strokes. The aliens have a surprising agenda, and Jimmy and Sebastien are appointed by the mayor to handle it. Later, Lois Lane tricked into getting married to magical female imp from the 5th dimension. Then he gets a slight case of amnesia, gains superpowers and becomes “Co-Superman”, the new hero of Metropolis. And it all ends with a battle in space as Jimmy tries to rescue Chloe from danger and foil a secret plot to take over the world. It’s good stuff.

I was not familiar with the work of writer Nick Spencer before reading this, but he managed to include just the right amounts of action, drama, humor and romance in this comic. Jimmy’s characterization is right on target and all the dialog flows naturally (if perhaps it’s often a little too heavy on pop-culture references, which tends to date the story). I didn’t watch much Smallville, so it’s not like I was particularly enthusiastic for Chloe Sullivan to be introduced in the comics, but she fit in well here. But I was more impressed with the introduction of Sebastien Mallory, whom I thought could be a good long-term “villain” in the comics (although it doesn’t look like he’s made any further appearances in DC Comics since then, which is a shame.

Artist RB Silva draws the majority of the issue and does an excellent job, with an assist from Amilcar Pinna on the final chapter, who fits in just fine (I can’t even tell where Silva stops and Pinna begins, which is good because a dramatic shift in style could be jarring). Overall this is a great package that I recommend to any Superman fan.