Alright, I’m trying to get back into regular blogging mode again. Time to live up to the name of this site and blog a lot. I know that up until yesterday’s first post I had not being doing much blogging at all in the past several months. And most of the blogs I have done are various comic-book reviews, which I known only small portion of my steady followers are interested in. So, for now, I’m trying to hold off comic-books and post more general topics.

I will say that despite my laxity, I’m impressed and grateful that site still generates many hits. In the last month, for example, I only post one new blog, my review of Horrible Bosses 2, yet I still got a total of 4,288 views from 3281 unique visitors! So thanks to everyone who stopped by, for whatever reason.

However, I missed out on some stuff. In addition to not updating my own blog, I’ve been lax on reading and commenting on the multiple blogs whom I’m following. I plan to get more involved with that again, too.

NIKKI SKIES had inquired about me doing a guest-post on her blog last month, as it was Women’s History Month, and she wanted a male perspective. But I missed that shot. Oh well, I doubt I could have came up with anything interesting anyway.

1. Who is your favourite public figure?

That is a threeway (or four-way) tie. First, MUHAMMAD ALI 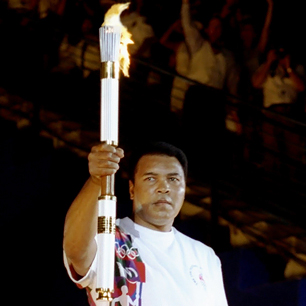 A true champion, in more ways than one. I’ll always admire the courageous stand he took and sacrifices he made for his beliefs. They just don’t make pro-athletes like him anymore.

BILL AND MELINDA GATES
(I count them as one)
The richest couple in the world, who have spent billions in charity around the globe. With great power comes great responsibility, and they live by that motto.

Well, that’s pretty general. I don’t know. I like being left alone.
I also really like pizza.

Nope. I’ve never been a trend-follow (or trend-setter). That was always more of my older brother’s style, he was the one who kept on the latest fashions and music, etc. But I’ve never been interested in that stuff.

4. What do you do when someone gets angry?

Get away from them. I have no time for drama.

5. What have you loved the most?

Again, too vague. I guess the same answer as before. I love being left alone. And pizza.

Yes, check my CHARITIES page, which I probably need to update.

7. What quality do you admire the most?

Loyalty. And friendship. Someone who is loyal to their friends and trustworthy is the best thing.