Dick Morris is a political analyst/pundit, whose biggest claim to fame is that he helped President Bill Clinton in 1994, after the GOP retook the Congress for the first time in over 40 years, President Clinton regain his relevancy and coast to an easy re-election 2 years later.

That’s pretty much it. That’s his major accomplishment. And ever since he was forced to resign in 1996 after getting caught with a hooker he’s been riding that one experience to be an author and political pundit.

This is despite the fact that his track record for the 19 years since then has being pretty much abysmal, in that he has not done anything noteworthy. Last month he wrote an editorial for The Hill titled Dick Morris: 9 reasons to reject Hillary

The article isn’t really worth reading, all of his conclusions are easily refuted, which I won’t bother doing here because Jim Wright already did that, brilliantly. But the fact that Dick Morris is even taken semi-seriously by anyone just shows what is wrong with political news reporting today. In the months leading up to the 2012 Presidential election, Dick Morris was a frequent guest on various Fox News Channel TV shows, confidently predicting the outcome of the election…

That’s right, he predicted that Romney would win in a LANDSLIDE, with 325 Electoral votes to President Obama’s 215. Just a few days before the election he was on the O’Reilly Factor, reiterating his prediction. You can read the transcript, it’s quite illuminating. Look at the way he frames it, not just in terms of how the election will turn out, but in how the reaction will be. In the Youtube clip he he predicts that this will raise questions about how “the media” reported the election by making it look like a close race when, in reality, Romney will cruise to an easy victory. On the O’Reilly show he predicts that the (liberal) media will allege that Black voters were suppressed (while Morris predicted that the Black vote would be lower simply because the “novelty” of a Black President will have worn off so they won’t turnout in the same numbers as they did in 2008), and that’s why Romney won (and O’Reilly helpfully proclaimed that he “wouldn’t let the media” get away with that, if it happened).

Of course, as we all know, it was President Obama who cruised to an easy victory, winning by a “landslide” of 332 electoral college votes to Romney’s 206. And what was Dick Morris’ explanation for how wrong he was?

Basically, he says that assumed that 2008 was a “fluke”, he didn’t think all those People of Color and young Whites who turned out for Obama really knew what they were doing. He thought things would get back to “normal” (y’know, the good old days when it was old White men who decided the elections) in 2012. The bottom line is that like most old conservatives he can’t accept that the future is here, and demographics have changed. Of course, he still thinks that most of those People of Color are simply voting their ethnicity, only supporting President because he’s Black, not become of any of his policies.

Here’s the irony. As I said, Dick Morris is also an author, writing around 20 books, so far, including this little gem published back in 2006: 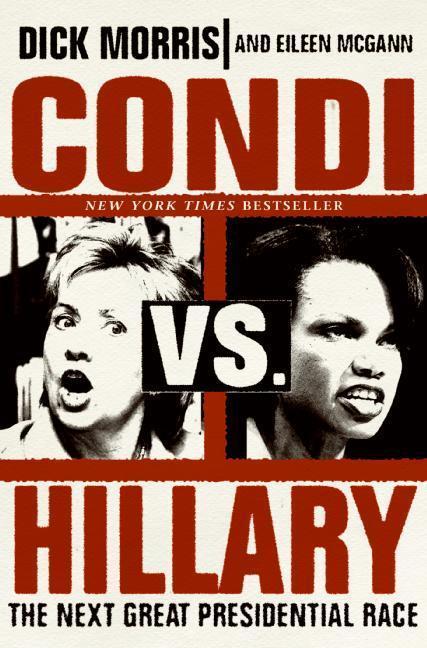 Yes, Dick Morris predicted that Hillary Clinton would be the 2008 Democratic candidate (WRONG) and that the GOP candidate would be Condoleezza Rice (WRONG). He gleefully predicted that Black civil rights and political leaders wouldn’t be able to attack Rice (because she’s Black, after all, and she’s so educated), and that Black voters would turn out to vote for her over Clinton. That’s right, Black voters voting purely based on race is fine, and even desired, as long as they’re voting for a Black Republican. What a moron.

Admittedly, when it comes to predicting Presidential elections I’m not so good at it myself but then again I don’t claim to be an expert and I don’t get paid to go on TV or write books about it. So you’d think after being so consistently and blatantly wrong (not to mention possibly corrupt), Dick Morris would be finished. He’d be disgraced and forgotten about.

It’s true, after the election Fox News didn’t renew his contract but he continues to make TV appearances, writes more books, host his website and write Op-Ed’s like the one above. Why? It’s very simple: we are now in an era where people can pick and choose what “news” they want to follow. If you’re a right-winger, you can watch Fox News, listen to conservative talk radio hosts, and read conservative websites, all of which will validate and re-iterate your personal worldview (regardless of those pesky “facts”). You only have to see, hear and read the “news” that you personally agree with, and ignore anything else that contradicts what you want to believe (which is why attacks on “the mainstream media” are so popular amongst that crowd). And that’s what Dick Morris continues to do. It doesn’t matter how often he is WRONG, as long as he’s willing to tell them what they want to hear, they’ll keep listening to him, giving him credibility. And that’s a darn shame.