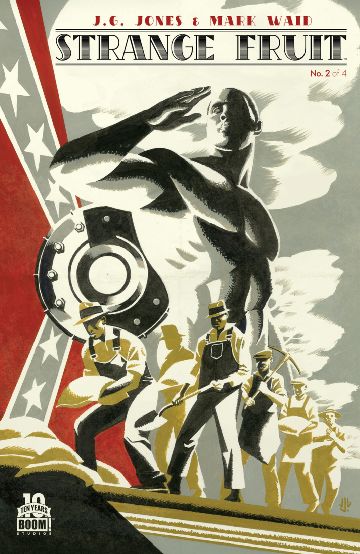 Picking up from the previous issue, the large muscular Black man from space, who has been nicknamed “Johnson”, comes wandering through town, with nothing on but a Confederate flag wrapped around his waist. This naturally is causing quite a commotion among the townsfolk, Black and White. He goes into a library and is seen reading multiple books, although it’s unclear if he understands the language. Eventually, the sheriff is called, and Johnson allows himself to be taken to jail, where Sonny, the Black man who was being hunted by the KKK is already in cell. The young son of one of the prominent White citizens in town has gone missing, and the sheriffs begin beating Sonny, suspecting him of the crime, Johnson uses his superhuman strength to break them out of jail.

There’s also some more stuff about coming storm and the threat to the town levees. With city leaders divided over how to handle it. But I’m just not finding any of that particularly interesting. There are several panels where we are seeing things from Johnson’s point of view, making it clear that he is a stranger in a strange land. Waid is very effective in presenting that. But I can’t say that I have any reason to care about the characters, as of yet. If this were a longer series, I might drop it now. But since it’s only planned for 4 issues, I’ll likely stick with it until the end (although the end could be awhile, since the first issue was published in July and this issue came out in September).

Once again the only thing that I have no complaints about is J.G. Jones’ beautiful artwork. I just wish the story had more reason to draw me in.