Written by Bill Parker
Drawn by C.C. Beck and Pete Costanza
Foreword by Richard A. Lupoff
Published by DC Comics

This hardcover book is the first collected edition of stories of the original Captain Marvel, who has long been my favorite superhero. Within these pages are the first 14 stories in which Captain Marvel appeared, in the ongoing series Whiz Comics, published by Fawcett. If you’re reading this, I presume that you have some interest in Captain Marvel, and therefor know the details of the character’s creation, and eventually buyout by DC Comics, but if not, this blog has a good summary here: DC and Marvel both have a Captain Marvel, what’s the story there? What big differences are there between Superman and Shazam?

This hardcover opens with Richard A. Lupoff’s foreward, explaining much of the behind the scenes stories of the creation and initial publication of Captain Marvel, and it also includes the 9-page black and white “ashcan” comic, which was published solely to establish the copyright. From then it gets right to full-color origin story.

This story, at least the general high-points, is likewise well-known to longtime fans. Young homeless orphan boy Billy Batson is selling newspapers on the street, when he’s beckoned down into the subway by a mysterious person, and is introduced to the ancient wizard SHAZAM, who grants Billy the power to transform into the adult superhero CAPTAIN MARVEL, whenever Billy says the wizard’s name. As Captain Marvel, Billy possesses the powers of what is described as six gods, although two of the members are not actually “gods.”

He has the wisdom of the Biblical King Solomon, the strength of the mythical demi-God Hercules, the stamina of the Titan, Atlas, the power of Zeus, the courage (and presumably invulnerability) of the Greek hero Achilles, and the speed of Mercury.

Billy almost immediately learns of a plot by a mysterious mad scientist known as Dr. Sivana, who has built a machine that can control all the radio waves in America, and is trying to hold the nation for ransom. As Captain Marvel, Billy manages to foil Sivana’s plans, although Sivana himself escapes, and he uses his inside knowledge of the whole event to secure for himself a job as a radio reporter for radio station owner Sterling Morris.

Like most comics of the time, it’s a short (13 pages) and relatively simple story. What I find interesting, upon re-reading this story again for the first time in several years, is how dark it actually was. For a industry and genre that was primarily aimed at children, it’s got some pretty adult sensibilities.

There’s the image of young Billy being kicked out on the streets after the death of his parents by his evil uncle. The shadowy figure who leads him to the subway, and it’s spooky tunnel. The wizard is crushed to death by a giant block of granite after granting Billy his powers. Dr. Sivana looks suitably evil, Lupoff claims he was deliberately drawn to look like Max Schreck from the 1922 horror film Nosferatu. And the fact that Captain Marvel practically threatens to kill Sivana, next time he sees him. It’s pretty harsh.

It’s also notable that Sivana was clearly intended from the beginning to be Captain Marvel’s arch-foe, as he appears in the next three stories after that. First, in THE RETURN OF SIVANA, he has somehow acquired an army of “thousands of super soldiers” armed with high-tech weapons, including tanks and “the mightiest air fleet in history.” Commanding them all from his secret mountain fortress, he attempts to invade America, so he can make himself the “Emperor of the United States!” Captain Marvel defeats Sivana’s army, and Sivana is apparently blown up in his fortresses thanks to one of his own atomic weapons.

But Sivana returns again, under the false identity of “Xerxes Smith”, claims to be a scientist whose invented a rocket to take him to Venus. Billy manages to convince him to tag along, only to then discover that Xerxes’ true identity. But it turns out that Venus has a perfectly breathable and atmosphere and similar gravity to Earth, as neither Sivana or Billy need space-suits when they get there. It’s also a green forest-world, populated by many fantastic creatures, including red dragons, giant eagles, and humanoid frogs, who appear to be the dominant species on this world, but they’re all ruled by Sivana’s impossibly sexy daughter, Beautia, the Empress of Venus. It is in the story that Sivana discovers Billy’s secret that he’s Captain Marvel. Sivana and Beautia manage to subdue Captain Marvel, and they leave him on Venus as they take the rocket back to Earth, where Sivana has a plot to have Beautia take over America (and then, the world), with some the help of some special gas that Sivana’s invented which he says will put every man, woman, and child under his control. Cap, of course, breaks free, and builds a new rocket to take him back to earth, where he foils Sivana’s plans again, but not before Sivana and Beautia escape.

In the very next story, Sivana and Beautia continue their plot to take over America, except this time through a legitimate election. Beautia runs for President, and Sivana creates a compaign based upon her good looks, as we’re told that no man (except Captain Marvel, but only barely) can resist her.

How funny is that? The idea that Americans would elect someone President, despite the fact that they have no qualifications for the job, just because they’re a celebrity. Isn’t that absurd?!?

Well, without spoilers, Captain Marvel foils this plot, too. Thanks in large part to Beautia turning against her father to save Captain Marvel. Her being torn between her loyalty to her father and her feelings for Captain Marvel would become the defining characteristic of Beautia over the years. She returns to Venus at the end of this story, while Sivana gets away, again vowing to return.

CAPTAIN MARVEL SCORES AGAIN! is the first story in which Captain Marvel faces someone other than Sivana. A mysterious figure is recruiting street kids to commit crimes, and Billy most go undercover to figure it out.

Other stories in this volume include Captain Marvel facing a wanna-be dictator who has gathered an army of frozen caveman in the Antarctic to launch a war (it was 1940, after all, so it’s understandable why “World War” was a common theme in superhero comics at the time), an evil conman who kidnaps rich men, fakes their deaths, and then cons their widows out of money by pretending to hold “séances” where he can talk to their dead husbands, another evil scientist with a shrinking ray (who at one point threatens to shrink Billy down to three inches and then put him in a cage with a snake that will eat him…I told you these stories were darker than expected), and a few more evil schemes by Dr. Sivana.

The stories are pretty enjoyable, usually under 13 pages each, but pretty sophisticated for their time. Certain story tropes develop, such as Billy going undercover to root out some criminals, only to be captures and immediately gagged, so that he can’t speak, and then being left alone all tied up, usually facing danger, until he can get the gag out of his mouth at the last minute and say SHAZAM! so that as Captain Marvel he can save the day. The artwork is better than average for the time-period as well.

Oh, yeah, speaking of Billy going undercover, there is one little scene in this book, which may be a bit controversial. . .

Just keep in mind, it was 1940, y’all. Standards were…different, then.

Overlooking that, I think this hardcover is a must-have for the bookshelf of any true Captain Marvel fan, or even just superhero historian. 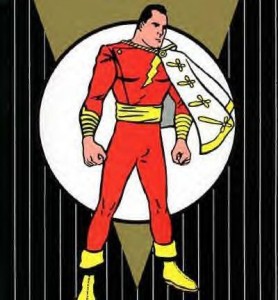