SUPERIOR #5 and #6 BY MARK MILLAR AND LEINIL YU

Well, after 8 months since the last issue, this miniseries FINALLY returns, with 2 issues released this month. So I’ll be reviewing both in this one post.

#5 begins with Superior leading a squad of fighter jets into Afghanistan where, at the behest of President Obama, he takes out the Taliban, dismantling all their weapons and arresting all the terrorists within 24 hours, without a single loss of life. Afterwards he becomes an international hero. He addresses the U.N., and assures the world that he is not an instrument of America’s government and is here to help the entire world. He then saves Mecca from a meteor shower, stops an earthquake in Japan, stops a flood in Australia, gets rid of Russia’s old nuclear missiles, and delivers food and medical supplies to Africa. The President then offers Superior any reward he wants and we see him batting for the NY Yanks, playing bass with his favorite (unnamed) rock band, and playing basketball with the NY Knicks against the Miami Heat, and dunking on Lebron James. Then we cut to a scene of Sharpie, the bully who had tormented Simon in the first issue, at his home with his clearly dysfunctional parents. From his dialog, he has clearly made a deal with Ormon. Next we go to the penthouse apartment of Maddie Knox, the reporter. She’s on the phone with her editor, telling him that she has a date with Superior, and bragging about how she plans to seduce Superior, in order to get him to tell her all of his secrets. But then soon after Superior shows up, Ormon appears and turns Superior back into Simon, and finally reveals that in order to go back to being Superior, Simon must sell his soul to the devil.

Well, once again, I have to say that I’m just not a fan of Yu’s artwork. His Barack Obama doesn’t look anything like the real thing, and the coloring in this book is very dull, and does nothing to enhance the art. As for the story, well, there were some things that pushed my Suspension of Disbelief. Simon is still just a kid, so even with the powers of Superior, I have to wonder how he just suddenly knows do the exact things to fix so many problems. The fact that he was expertly able to rid Afghanistan of the entire Taliban, without violence, also seemed implausible. And there just so happened to be a meteor shower (how common are those?) threatening Mecca? Gee, what a coincidence.

Although I suppose that all of this could be part of Ormon’s deal, he wants to temp Simon with selling his soul so not only does he give him Superior’s powers, he gives him the intelligence to use them properly (although Simon still had to test out the powers in #2), and creates a series of disasters specifically so Simon as Superior could solve them. It also seemed odd to me that Superior would have forgotten that his 7 days were up. Ormon told him specifically that he’d be back in a week, you’d think he’d remember and take note of that. Even the fact that all of these things took place in just one week seemed rushed to me. I can’t believe that the government would really accept a superhuman like Superior so quickly. Instead of immediately enlisting him to help them fight the War on Terror, they’d want to get him to some secret lab where they could experiment on him and figure out how his powers work, and who he really is. And the behavior or Maddie is ridiculous. Her editor has no problem with her basically saying she’s going to whore herself out to get a story? Sheesh. 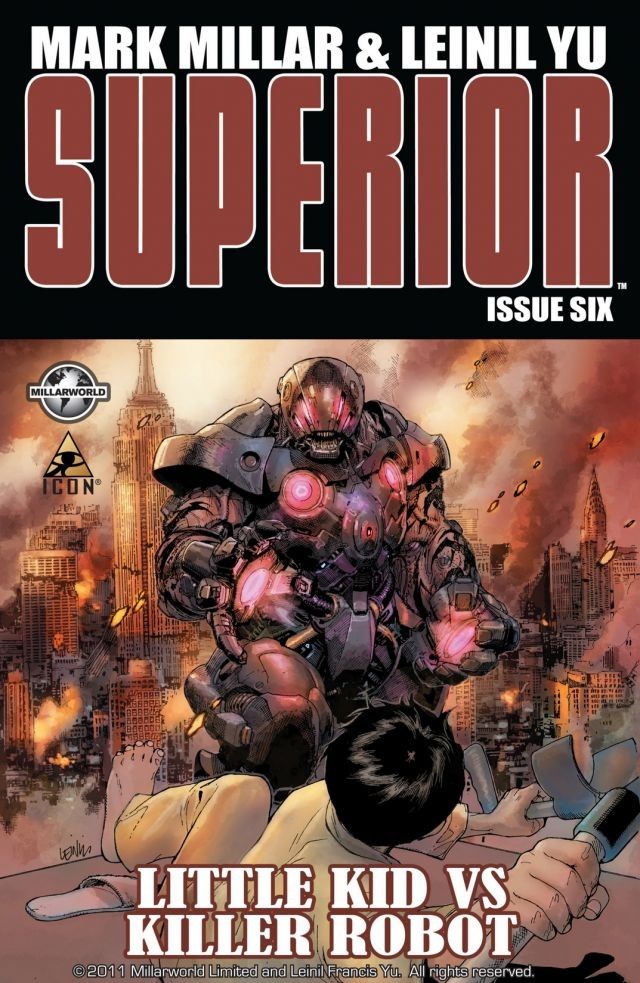 The next issue has Ormon taunting Simon with being a helpless cripple for the rest of his life or being Superior again, if he agrees to sell his soul. Then he disappears and Simon is left alone with Maddie. He tells her the whole story of who he is and how he got his powers, while Maddie is just faking caring about him because she knows this will be a great story. But suddenly she changes her mind, and decides to keep his secret. She tells him about how he she leukemia when she was a kid, and takes him to a children’s hospice, where kids go to recover from serious medical problems. Then Simon returns home to his parents, apparently having decided not to sell his soul, and Maddie writes a story saying that Superior has said goodbye and has left for another world. Then we cut to Sharpies house, where Ormon transforms him into Superior’s worst enemy from comic-books and movies, a giant robotic-like creature named Abraxas. Then he starts smashing up the city, throwing an ocean liner through a skyscraper, and publicly demands that Simon turn back into Superior within the next 60 seconds, or else he’s going to kill millions of people.

So, there’s are suspenseful cliffhanger. My biggest problem with this issue was Maddie’s sudden change of heart, which came out of nowhere and didn’t feel natural to me at all. And, in both of these issues, there is more of the unnecessary cursing and violence (apparently, Sharpie killed his parents, as we get a shot of their dead bodies nailed to a wall) which are the only things keeping this book from being an All Ages comics, with much wider appeal. And That’s a shame.

Anyway, there you have it. The 7th and final issue of this miniseries is due next month. Unfortunately, I plan to be real busy, and most of my disposable income will be spoken for, so I may not be able to purchase the issue until later, probably in Dec. when I can afford it. Then I’ll be able to review that, as well. Maybe when I can re-read the entire series in one sitting it will seem better to me.