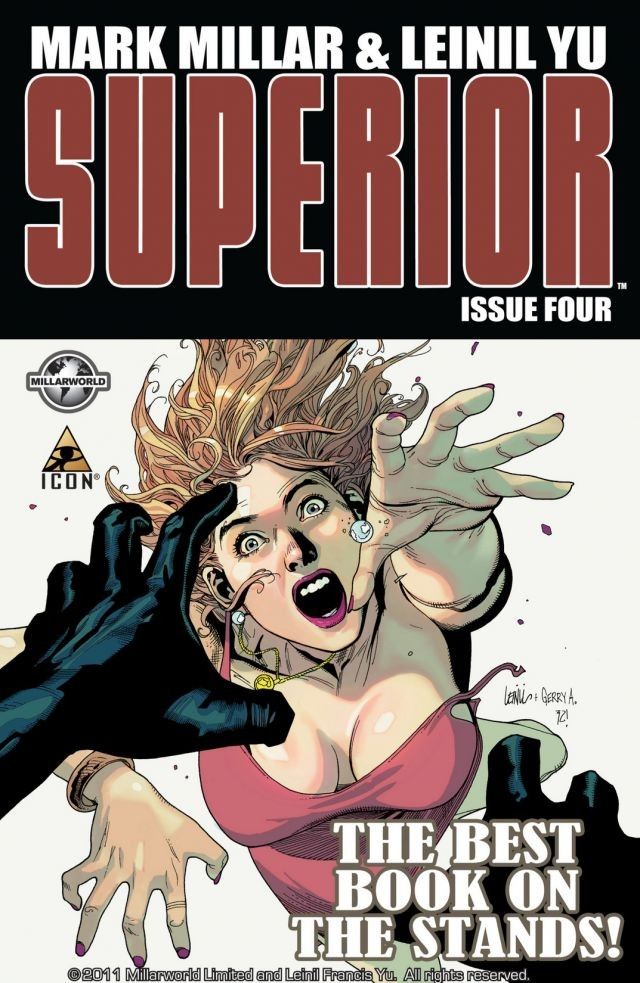 This issue opens with Tad Scott, the actor who has portrayed Superior in 5 movies meeting with some executives from the movie studio that produces those movies, They tell him that they’ve canceled production on the next Superior film because of this real-life Superior who has appeared. They don’t know if they still have the rights to make movies about this character if he is “real”. I must say, this scenes brought up some interesting hypothetical questions in my mind. How would Warner Bros. (not to mention the families of Jerry Siegel and Joe Shuster, who are currently involved in a lawsuit against them) react if Superman suddenly became real? Would interest in Superman merchandise and publishing increase or decrease? And what if the real life Superman just so happened to look exactly like Tom Welling or Brandon Routh (or even Henry Caville)? How it would it affect him personally? In the comic, Tad Scott is encourage to go hide out with family until they figure out how to handle this. In reality, I’d expect that Welling or Routh would instantly be taken into custody by the Feds, to see if he’s connected to this.

We also learn that Simon has written to his parents, telling him that he’s okay, and will explain everything to them in a few more days. At first I was wondering why Simon hasn’t gone home already, since he loves being Superior so much. But then I remembered that Ormon, the space monkey who transformed him, told Simon that he would explain everything in a week, so I suppose Simon is waiting until he finds out exactly what’s going on. That makes sense. But Simon has done so much, as Superior, in the last couple of issues, that’s hard to keep track of exactly how much time has passed since the first issue. All we know is that it’s been at least 3 days.

Moving along, next we see Maddie Knox, the female TV reporter who was introduced in Superior #3. She’s desperate to contact Superior and so, in a scene straight out of John Byrne’s Man of Steel #2, she purposely crashes her car into the river, in order to get his attention. Lucky for her, it works, and Simon rescues her. Then she somehow has a TV crew right on hand to interview him. After a few brief words, where Simon assures her that he just wants to help (“Because I’m a superhero. Look at the costume.”), he flies off. Then we get a montage of the fictional history of Superior. And although this series has an obvious parallel to Captain Marvel, since it’s about a young boy who becomes a superhero, the similarity to Mark Millar’s admitted favorite superhero, Superman, is really apparent here. We learned in the training sequence in Superior #2 that Superior has all of the same powers as Superman, and in this issue we see that his history is basically the same. Created in the 1930’s, and enduring throughout the following decades, including in a series of films that came out during the 1980’s, he was always a symbol of hope.

Then we see Simon’s best friend Chris getting beat up by those punk kids we first saw in Superior #1. When he returns home, we see Simon watching his interview with Maddie Knox on TV, and after he tells Simon what happens, Simon takes him back to go confront the bullies. Simon takes the leader of the group, a kid referred to as “Sharpie” to the North Pole for two minutes, and threatens to leave him there if he ever picks on Chris again. After that, Simon decides that he should be using his powers to make really big changes, so he arranges a meeting at the White House with President Obama, and offers to help fight in Afghanistan, and capture Osama Bin Laden while his there, to which the President seem very willing to accept his help.

This is where I once again had to think hypothetically. I can’t imagine that, in the real world, the government would be so accepting of an individual with those types of powers, especially after he’s only been public for a few days. In real life, I’d imagine that they’d have the President hidden away in some secret bunker to keep him away from Superior, while the entire Military Industrial Complex as put to working trying to figure how to capture and/or kill him. But, according to the preview of the next issue’s cover, it looks like Superior will be leading troops into Afghanistan, just like that.

Then we see Sharpie walking the street alone, cursing Superior, when he is suddenly is confronted by Ormon, who offers to grant Sharpie a wish. . .so it looks like Simon will be coming up against a real-live supervillain soon.

This is probably the best issue of the series, so far. I won’t complain about Yu’s artwork anymore, it is what is it. Same in regards to the cursing, I just have to accept that this series is not an all-ages title, and clearly was never meant to be. I still think that’s a shame, since that could broaden the potential appeal of of a book like this, but so be it. But I’m glad I stuck with it, and I am looking forward to issue #5.