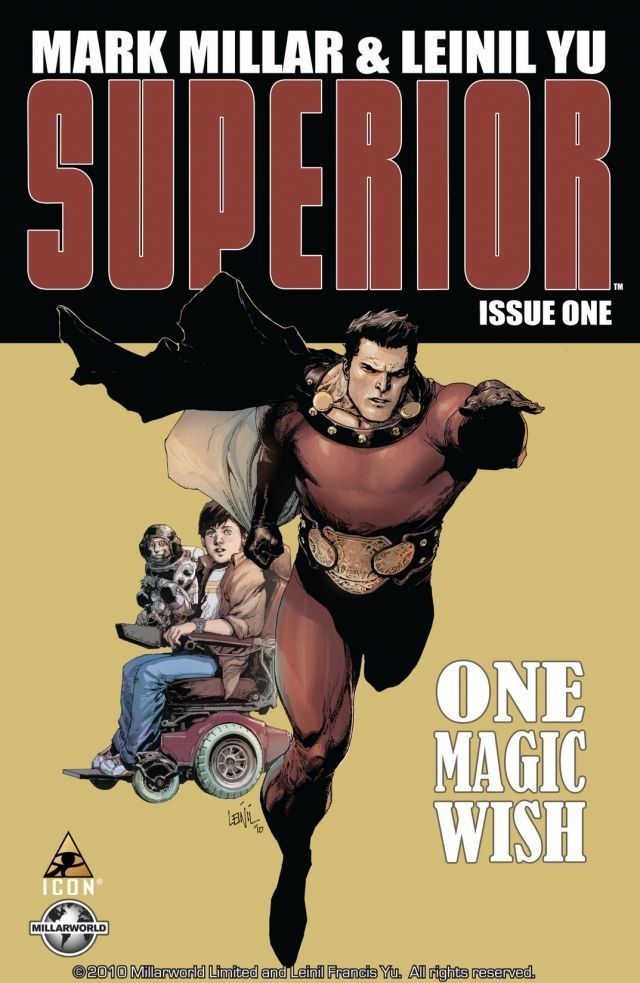 In recent years, Mark Millar has become one of those comic-book creators who, like John Byrne or Rob Liefeld, very few comic-book fans don’t have a strong opinion about. Either you love his work, or you hate it. Me? I was a big fan of his, starting with his run on The Authority, but I must say that, beginnging with Marvel Civil War (which I could probably write six blogs, one for each issue, detailing how horrible it was), I found myself liking his work less and less. Many of his more recent projects, like Ultimate Avengers, Fantastic Four, and Nemesis, all seemed like great ideas, that fell apart in execution (or at least didn’t live up to their potential). The biggest complaint I have is his over-realiance on over-the-top violence, for violence’s sake, and what seems to be his desire to “shock” readers, in any way that he can.

But that’s just my opinion.

I was ready to give up on his work completely after Kick Ass, but one thing I held out for was his long stated desire to someday revamp Superman. I always knew that if he ever got that chance, my curiousity would be too strong to resist. Superior has, in several ways, been described as Millar’s version of Superman, and so even though I rarely buy many individual comics anymore, I made the stop to my local comic store after work today, and picked up the first issue. I was cautiously optimistic that, perhaps, this would be a return to form of the Mark Millar who wrote the wonderful all-ages Superman Adventures series, as well as Superman: Red Son (which is one of my top 5 favorite Superman stories of all-time). So, is it?

We open with a scene of the hero, Superior, facing his arch-enemy Abraxas, who appears to be some kind of man (or alien) in a big suit of armor. Superior appears to have the upper hand, until Abraxas unleashes The Annihilator, of which we only see a giant Skull, crashing down upon the city. It turns out that this is just a movie. It’s a scene from “Superior 5.” Two teenage boys, Simon and his best friend Chris, had went to see the film together. Simon is in a wheelchair, suffering from multiple sclerosis. Outside, as they talk about what they did and didn’t like about the film (Chris thinks Superior is “lame,” too old fashioned, but that’s what Simon loves about the character), they get hassled by two other boys, who make fun of Simon, until Simon’s mother appears and they leave.

We get a montage of scenes over the next few pages, describing Simon’s life up to this point. I must say, this is where Millar’s writing really shines in this issue. I really got a feel for this poor kid, as we see how he was a popular athlete at his school, until his condition rapidly deteriorated, to where he now feels like a prisoner inside his own body. He mentions that most of his former friends abandoned him, and only Chris made a point to still hang out with him. After reading this, I wished I could jump inside the comic so I could confront the other two kids who were picking on him earlier, and smack the crap out of them.

That night, as Simon sleeps, he’s suddenly awakened by an alien, who calls himself Orman and looks like a monkey, who tells Simon that, out of 6 billion people on Earth, he has been chosen to get a magic wish. Simon is then transformed into Superior, looking exactly like the actor who played Superior in the earlier movie that we saw. Ormon tells Simon to “show me what you can do” and says that he will back to explain everything in week. Then Simon, still as Superior, is on the floor in his bedroom. He hears his mother downstairs, talking to a policeman. Even though it’s just been a few minutes to him, Simon hears that he’s been missing for a whole day, and his parents think he’s been abducted, but the cop thinks Simon ran away. In a panic, Simon flies through the roof, living a big hole for his mother and the cop to see, and flies to his friend Chris’ house. And that’s where this issue ends.

All in all, it’s a decent start for this series. It didn’t blow me away like I’d hoped it would, but it interested me enough to want to read the next issue. So, on that level, it succeeded. I know I’m going to sound like an old fuddy-duddy (which I probably am), but my biggest complaint, as far as the writing goes, is the language. There is some cursing in this book, which I have to say is just unnecessary. Yes, I know this is how many teens realistically talk, and this is a creator-owned book not a mainstream Marvel series, but just because you can use those words in a title like this, doesn’t mean that you have to. What’s wrong with using “#$%@” instead of “shit” and “fuck”? It wouldn’t have detracted from the story, and that’s the only thing keeping this issue from being a truly all-ages title, which would broaden it’s potential base. Oh well.

Art-wise, it’s decent enough. I’m not a particular fan of Leinil Yu’s style. It’s not bad but it’s just not really my thing. I would have preferred one of Millar’s other frequent collaborators on this. I can imagine these pages drawn by Bryan Hitch or Steve McNiven, in which I’d probably buy the whole series even if I didn’t like the writing that much. But, then again, if Hitch or McNiven were drawing this, it would probably take at least 2 years to finish all 6 issues (I think that’s how long this is supposed to be), so at least with Yu on board, I know it will be completed in a timely fashion.

To give this a final score: Three out of Four stars.