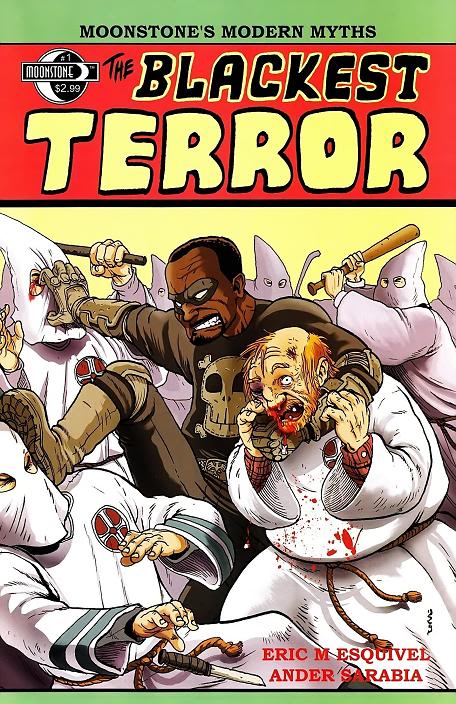 The Black Terror is a superhero that exists in the “public domain,” which means that the original copyright and trademarks have expired and so anyone can use the character. For the past few years, Dynamite Comics have been utilizing him, and several other public domain superheroes, in various books, including the Project Superpowers miniseries’, and in his own series. This is another take on the character. I have been anticipating this book ever since I first read about it last August on Bleedingcool.com, and then an interview with the writer, Eric M Esquivel on Ghettomanga.com in Sept. After several delays, the book finally came out last month, and I just received my copy.

The story begins with the Blackest Terror being interviewed on a popular TV news show, in front of a studio audience. This is despite the fact that it is mentioned that he is currently wanted for questioning in over a dozen crimes, including the murder of two police officers. So you’d think this would be an extremely risky move for him. The host is White, as are most of the studio audience, and Blackest Terror acts very hostile for the duration of the interview. The host asks for his “secret origin,” which Blackest Terror then reveals. He was doctor, operating a small free clinic, providing health care to those who couldn’t afford. Apparently, although he says he did this to benefit “his” community, he set it up in a White neighborhood, as we see a crowd of Whites with signs like “Negro go home” protesting outside his clinic. One night, three young White men were beating up an elderly Black man, who was on his way to the clinic, when the doctor confronts them and viciously attacks (& possibly kills, it’s not made clear in the book) the three men. And it was that night that he chose to adopt the persona of The Blackest Terror and become a vigilante.

As I read that part, I couldn’t help but thinking that was a lot of personal information for him to be revealing on live television. Even without saying his real name, that was more than enough for any detective to figure out whom he really is.

Anyway, the books continues with the interview, and some more dialog about why being a “superhero” really means. It’s revealed that since Blackest Terror’s debut, several other Black vigilantes have sprung up around the country, and the world, as well as one Native American vigilante, the Bronze Terror, and Blackest Terror considers himself a revolutionary, just the first of many more to come. Then, the book flips out, as Blackest Terror pulls out a gun and the Black weatherman on the news show, a man named Al. Blackest Terror accuses him of being a tap-dancing Uncle Tom, gets Al to admit that his real name is Kumali, and that he changed it just to get a job in the news, and then forces him to shoot & kill the TV host.

I had to read this book several times to see if I was missing something, because it felt like I was. I don’t know what, but something. I suppose that part of the problem is my own preconceived notions. Based on the cover art, and Esquivel’s comments about superheroes being “revolutionary”, I was expecting something closer to Garth Ennis’ Punisher or The Boys, filled with action-packed violence, but it didn’t really go there. The sequence with the 3 White men certainly filled that void (and was beautifully drawn by artist Ander Sarabia), but most of the book was dialog. That’s not to say that a “talking heads” comic can’t be entertaining, I’ve read many over the years, but when you’re an independent black & white comic featuring a mostly unknown character, I think you need to make sure you can really pull that off. And I don’t think Esquivel quite managed it here. I could feel that he had some kind of message that he wanted to across with this book, but I’m still not quite sure what it was. And the logistical problems, that I mentioned earlier, bugged me. Such as, this wanted criminal appearing on a live TV show, and revealing clues about his identity, and then forcing a man to commit cold-blooded murder on live TV. It just left me going WTF? I know that with comics we often need to suspend our disbelief, but this was pushing it. Maybe if this were the first issue of a miniseries or ongoing the ending would have worked better, because I could assume this was heading towards a logical conclusion but, as it stands, it’s a just a one-shot, with no promise of future issues.

So, unfortunately, I can’t give this book a thumbs up, at least not on the story, although, again, I will emphasize that the artwork is great. No complaints there.