THE CAPTAINS by William Shatner 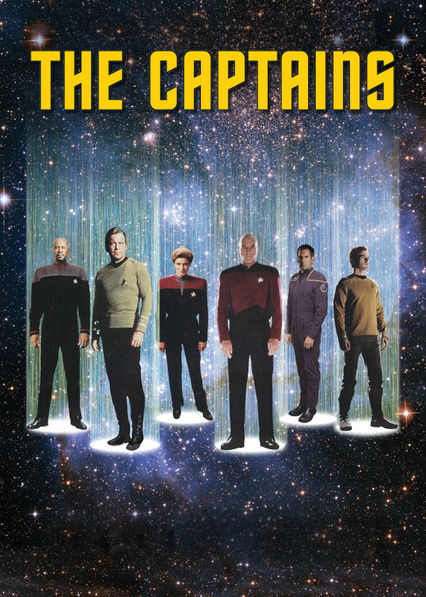 I’ve blogged about my love of Star Trek before, so when I heard about this documentary, I just had to get it. William Shatner (Captian James Kirk) hosts this documentary where he interviews the other actors who, like him, played Starship Captains in various Star Trek TV shows and movies. What I like most about this film is that I originally expected it to be a series of interviews, where he sits down with one actor and interviews him, then switches to the next, and so on. Done that way, it would be effective, but that could easily be done on a TV talk show. Instead, Shatner switches between the various actors, talking to each for a little at a time, keeping the film moving forward.

It begins with Shatner traveling to Sir Patrick Stewart’s (Captain Jean-Luc Picard) home in England, then he goes to meet Avery Brooks (Captain Benjamin Sisko) in Princeton, NJ. Then Shatner meets Kate Mulgrew (Captain Katherine Janeway) in New York, Scott Bakula (Captain Johnathan Archer) at a ranch in Los Angeles, and then, finally, Chris Pine (new Captain James Kirk), in Culver City, CA. He spends a few minutes with each in the beginning and then returns to each one several times throughout the film, as Shatner also visits a few Star Trek conventions and interacts with fans, and shares details of his own background.

The thing that’s most surprising is what a natural interviewer Shatner is. I know he’s hosted his own interview show before, but I never watched it, so I didn’t know. But he is very good at it. He doesn’t read from any notes while talking, and it’s not set-up like a formal interview, it’s just like you’re watching him having a regular conversation with each actor. Everything flows naturally, they put their guards down, and really open up. We see Shatner and Bakula riding horses together, Shatner and Brooks sitting at the piano, and Shatner and Pine playfully arm-wrestling each other on a public street. Overall, the least amount of time is spent with Pine, which is understandable, since he’s the newest actor in the bunch, who doesn’t have as much of a resume. But with the rest, you definitely get some fascinating insights into who they are. Scott Bakula started as a singer and said that he still considers himself a singer who acts, rather than an actor who sings, and Avery Brooks is a tenured theater professor at Rutgers University. I didn’t know either of those facts.

What’s most touching is how every single one of them, including Shatner, lamented the effect that Star Trek had on their personal relationships. Shatner, Brooks, Bakula, and Stewart all got divorced during the course of their time on TV, and Mulgrew was a single mother and said that her two, now-grown, children refused to this day to ever watch an episode of Voyager because they resent the way it kept her away from them while they were younger. Stewart almost breaks into tears when he talks about the failure of his two marriages. It’s very touching.

The documentary also includes some brief discussions with other Star Trek alumni, including Jonathan Frakes (William Riker), Robert Picardo (The Doctor), Rene Auberjonois (Odo), and Connor Trinneer (Charles “Trip” Tucker III), as well as from Gene Roddenberry’s former assistant, Richard Arnold (who reveals that Roddenberry had to be convinced that Stewart, who was not his first choice, was right for the role of the new captain on The Next Generation). Jerri Ryan and Sally Kellerman make brief appearances too.

Overall, this is a great documentary, and must-see viewing for any self-respecting Trekker. Two Thumbs Up!