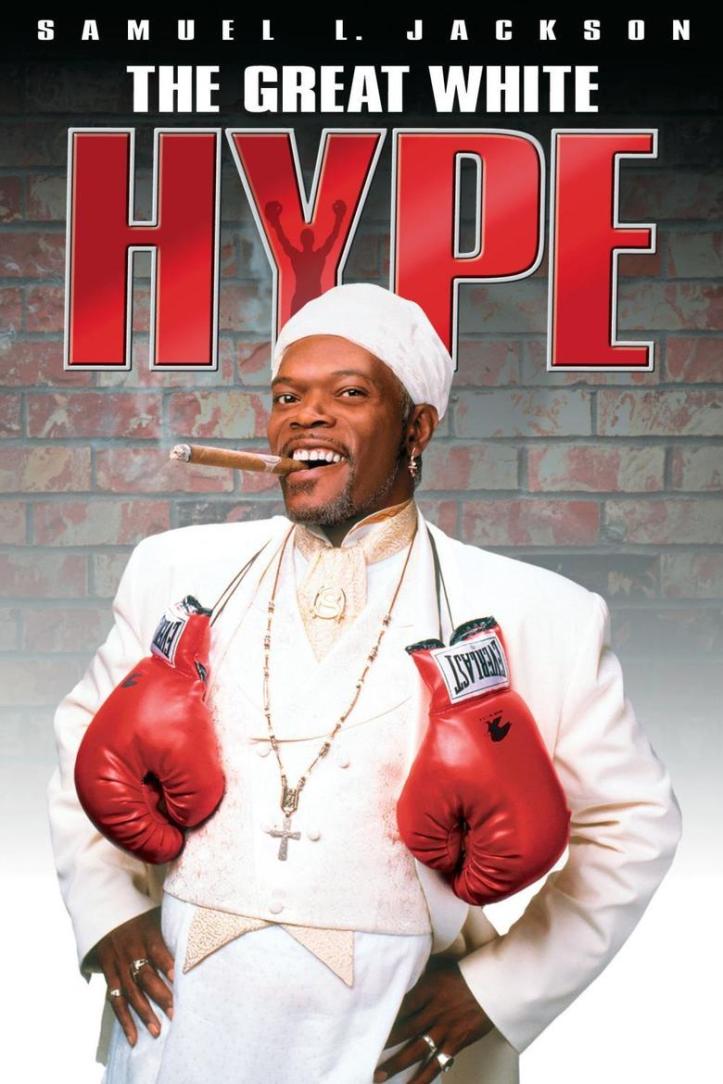 This is comedy film that I’ve always enjoyed. It stars Samuel L. Jackson as an unscrupulous boxing promoter, a rather flamboyant character known as Reverend Sultan. He is clearly loosely based on Don King, but without seeming like a parody. Reverend Sultan is shown to basically control the sport of boxing, at least the Heavyweight division, as he has Julio Escobar (Cheech Marin), the head of the biggest boxing organization, in his back pocket, and is personally managing the undefeated heavyweight champion, James Roper (Damon Wayons). As the film opens, Roper defeats his latest opponent but the fight is a financial flop. Reverend Sultan figures it’s because the public is bored with Black boxers fighting each other, and comes up with a plan to have Roper fight a White boxer next. Someone that looks credible, but that they know Roper can easily beat. They research all the leading contenders, but none of them look like credible challengers to Rober’s title. Sultan’s assistant Bambi (Salli Richardson) suggest that they look up a man named Terry Conklin (Peter Berg), who once knocked out Roper when they fought as amateurs when they were teenagers. Conklin had quit boxing and now is a socially conscious heavy metal singer in Detroit. Sultan and his crew track him down and convince the initially reluctant Conklin to accept the fight by promising him a $10 million payday. Sultan then begins hyping the upcoming based both on the fact that Conklin once knocked Roper out and that it’s fight between a Black man and a White man, hoping to play on racial politics to get the public interest.

It doesn’t work at first, as neither the public nor boxing press take the fight seriously, due to the fact that Conklin has never fought a pro fight (Sultan forced Escobar to make Conklin the #8 ranked contender, in order to qualify for a title fight). But that changes when, during a press conference, Conklin knocks out a boxer named Marvin Shabazz (Michael Jace) with one punch. Shabazz is the legitimate #1 contender to the Heavyweight title and is upset that he’s being passed over in favor of Conklin. Jeff Goldblum plays Mitchell Kane, a filmmaker who was working on a documentary about boxing that was meant to expose Sultan’s corruption. But when he tries to confront Sultan, the Sultan ends up bribing him to become his new publicist. And with Mitchell’s help promoting, soon the interest in the fight increases, and Conklin become very popular with White fans. Conklin himself is uncomfortable with the way the fight is promoted, with all the emphasis on race. He’s only doing this because he wants to use the $10 million to help homeless people.

Meanwhile, Roper doesn’t take the fight seriously, thinking that Conklin is no real challenge to him. He refuses to train, and just sits around the house eating and hanging out with his entourage, much to the chagrin of his trainer (Albert Hall) who keeps trying to motivate him. By the time of the weigh-in the night before the fight, Roper is noticeably overweight, but he and Sultan seem unconcerned, and remained convinced he’ll win the fight. But many others, including Mitchell and Conklin, to think that Conklin is going to win. Mitchell secretly signs Conklin to a new management deal, so that when Conklin becomes the new Heavyweight Champion, they can break the Sultan’s control on the division. And that leads to the night of the big fight….which I’m not going to spoil. You’ll have to watch it yourself.

Also notably cast members in this film include Jamie Foxx as Shabazz’ manager, John Rhys-Davies as Conklin’s boxing trainer, Jon Lovitz as Sultan’s original publicist before he’s replaced by Mitchell, Corbin Bernsen as the owner of a Vegas hotel where all of the big fights are held, and Rocky Carroll as Sultan’s lawyer. This is a fun light-hearted film, that mocks racial stereotypes without feeling too cheap.