IF I COULD BUY THE FANTASTIC FOUR. . .

So the story broke last week, thanks to Rich Johnston at Bleedingcool.com, that Disney/Marvel is apparently so upset about the fact that Fox Studios owns the complete film rights to the Fantastic Four (& apparently will own them in perpetuity, as long as they keep making a new film at least every 8 years, thanks to a deal made by previous owners of Marvel Comics back in the early 1990’s when the company was virtually bankrupt and desperately needed money), that they are now planning to stop publishing Fantastic Four comics sometime within the next year.

They’ll still own the characters and use them in other comics, just that there will be no ongoing series titled “The Fantastic Four,” and they will not be promoting them much. Internally, artists at Marvel have been informed not to draw any Fantastic Four characters in any promotional material for Marvel Comics, like posters and ads. Fox has a similar deal regarding rights to the X-Men, but the X-Men comics sell too much for Marvel to afford to drop them. Apparently the current Fantastic Four series isn’t doing that well anyway, so the PTB at Marvel feel that they can afford to cut it loose, just for spite.

Nevertheless, considering that it was the creation and publication of The Fantastic Four by Stan “The Man” Lee and Jack “The King” Kirby that jump-started the company now known as Marvel Comics, and began the “Marvel Era,” this seems like a rather drastic, and PETTY, move. Although I should point out that this is all just “alleged” at this time, as no one speaking for Marvel Comics has publicly confirmed this info.

Anyway, someone asked John “The Jackass” Byrne about this on his message board, since Byrne wrote and drew the Fantastic Four for five years, with a run that many critics claim was 2nd only to Lee & Kirby in terms of greatness. Byrne’s initial reaction was Well, if they don’t want ‘em, I’ll take ‘em! and then soon followed up with:

This thread brings up a conversation I had with friends, many a moon ago. Someone asked, if I had “a million dollars” and could just BUY the FF from Marvel, would I do it? I realized immediately that this was a much more complex question than it might seem at first glance. After all, if we think about it for a moment, we quickly realize that the Fantastic Four are not just Reed, Sue, Ben and Johnny. THIS is the Fantastic Four:
-posts the above image-
Sure, a few of those characters could be pruned, but without Doctor Doom, Galactus, the Watcher, Annihilus, the Skrulls, the Frightful Four, the Inhumans, the Mole Man, Wyatt Wingfoot, etc, etc. . .Well, it just wouldn’t be the same, would it?

My first reaction was, so then you’ll just have to create new characters for the FF to encounter. The very nature of the Fantastic Four is that they are not really “superheroes”. At heart they’re a team of explorers, going into the unknown. That’s what Lee & Kirby did in their original 102 issue run on the title, they created all those new wonderful concepts. And that’s what I would want to do if I could write The Fantastic Four. Add my own new ideas to the mythos. New alien races, ancient technologically advanced civilizations, forgotten Gods, mad scientists, time-traveling trouble-makers, misfit monsters, parallel dimensions, alternate realities, witches and warlocks, vampires and werewolves, etc. That’s the kind of book that Fantastic Four should be. The book where you never have any idea what will happen next. Where every issue could introduce you to a whole new universe. Just using the same old characters misses the point of the series. Or, as a member of the Bleeding Cool message board, said: So, in other words, no one could be creative with just the core characters? It requires re-hashing again (and again and again . . . ) the Lee-Kirby characters?

He’s right, that seems like a waste. However, the more I thought about it, I realized that Byrne has a point. Most of the iconic superheroes whom have lasted for decades are iconic now not just because of the main character, but also the mythology surrounding them. The supporting cast, the villains, etc. This is what I was saying in my two posts about secret identities.

Look at Superman, so many of the things people associate with the character are things that were added later, sometimes decades later. If you just buy the rights to the version of Superman that originally appeared in Action Comics #1 back in 1938, you’d have a character who couldn’t fly and didn’t have heat or x-ray vision, who worked as a reporter for The Daily Star, for editor George Taylor, with Lois Lane. He’s from a planet that exploded, but you couldn’t call it Krypton, because it wasn’t named in the issue. So that also means no Kryptonite. No Jor-El, Lara, General Zod, Supergirl, or any other Kryptonian characters. You couldn’t use the name Daily Planet, no Perry White or Jimmy Olson, no Lex Luthor, Brainiac, Metallo or any of his super-villains. You couldn’t use Jonathan or Martha Kent, or say he grew up Smallville (also can’t say he was Superboy when he was younger). And so much more. So, really, all you would own was the name “Superman”. You’d have to create an almost entirely new background, supporting cast, and rogue’s gallery for the character. In which case you might as well just create a new character anyway.

So I can see why Byrne said what he did. He already has his own creator-owned team called DANGER UNLIMTED, which was loosely based on the Fantastic Four. He could just restart that series if he really felt the itch to do “Fantastic Four”-type stories. But I disagree to which how much is necessary to continue the Fantastic Four. He admits that some of those characters could be pruned. I’d suggest that most of them could be. So trying to think of it from the perspective of a hypothetical buyer and wannabe writer, what would I feel I need to buy, outside of the 4 core members, to make my Fantastic Four comic-book series work?

First, and foremost, you have to have Dr. Doom. That’s simply non-negotiable. In my opinion, The Fantastic Four without Dr. Doom just aren’t worth it. Sure, you can try create a new villain as an analog, Professor Pain or General Gloom or something like that, but it just wouldn’t be the same. Ya gotta have the real thing. I wouldn’t want to overuse him in my hypothetical FF series. Appearances by Doom would be rare. They’d need to be an event, that whenever Doom appears in the book, that’s when you and the FF know that the s*** is about to hit the fan. Each scheme of his is an extinction-level event, and the FF should always prevail, but just barely. Never getting a clean and clear victory of him, and dreading the time when he’ll be back. 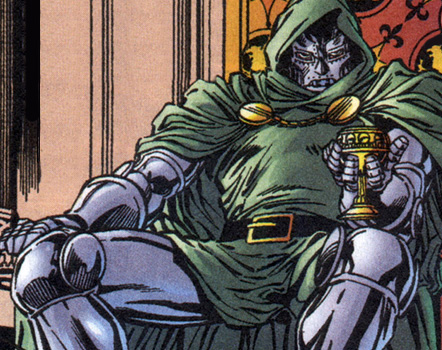 Because of Doom, I’d also want Kang The Conquerer. I don’t know if he technically counts as a “Fantastic Four” villain since he first appeared in and frequently fights The Avengers, but I’d want him if I could have him, to play up his status as a time traveler and possible descendant of either Reed Richards or Dr. Doom. I’d want The Mole Man. Since he’s the first villain the team faced after gaining their powers, he feels necessary to their story.

I’d want The Red Ghost and his super-apes. This is because I think I would write my FF series as a period piece, begin the story back in 1961 when the comic-book debuted. So we’d be back to the motivation for the origin where the FF took the risk of testing their spaceship because they wanted to “beat the Commies into space,” & that’s how they got their powers. So I like the idea of them having communist Russian nemesis, who had also got his powers via a risky space-flight.

I’d want the Molecule Man, just because I think he’s got cool powers. I’d also want Galactus and the Silver Surfer. Since they’re also part of the film licensing deal that Fox has, I’d assume they’d be up for sale with comic-book rights. I don’t need any of Galactus’ other Heralds, Surfer is the only one that really matters. And I think that concept is pretty valuable by itself. The Galactus/Silver Surfer story doesn’t really need any connection to the FF or the Marvel Universe, it works as a stand-alone sci-fi/space opera epic. So you’re getting an extra franchise right there.

Speaking of extra-franchises, I don’t think the Fantastic Four need The Inhumans. But I would love to have them. They also work as their own separate entity. If they could be written and packaged right (think Game of Thrones with superpowers), that could be huge. But Marvel still owns those film rights, so I guess they’re not considered part of the FF universe, even though they were introduced in that title. Likewise The Black Panther, who was also introduced in that title. I remember Tim Story talked about wanted to use the character in his next FF film, before that got canceled. But now apparently BP is locked into Marvel. But if I could, I’d actually rather have The Black Panther than the Fantastic Four.

After that, that’s pretty much it, in terms of villains and other heroes connected to the FF. I’d like access to the alien races the Kree and The Skrulls, but they’re not necessary. I can create other alien races. I’d probably like The Impossible Man, just for some wacky stories. I’d like to own Alicia Masters, as I think she played an important role as The Thing’s girlfriend. But I don’t need her father, the supervillain The Puppet-Master. I’d also want Herbie the Robot, from the old cartoon, just because. 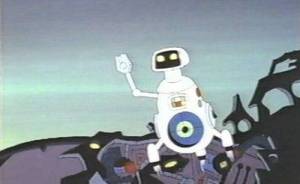 I’d be willing to take most of their other villains if they were included in the original deal, like The Frightful Four, I’m just saying that they aren’t all absolutely necessary. I also don’t need Franklin and Valeria because my version of Reed and Sue wouldn’t have kids yet (if ever). So just give me Doom, The Mole Man, Galactus & The Silver Surfer, Kang, The Molecule Man, Red Ghost and Super-Apes, The Impossible Man, Herbie and Alicia, and I think with that set-up I’d have enough to work with to publish my version of the Fantastic Four, which would be both new and familiar to fans. 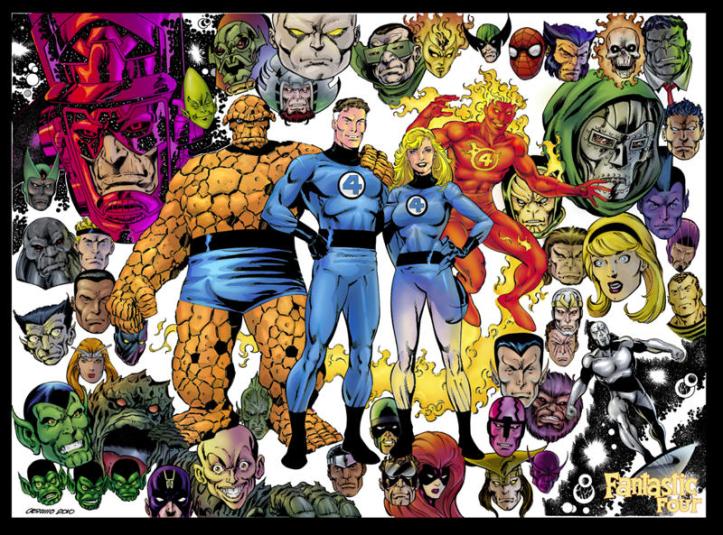