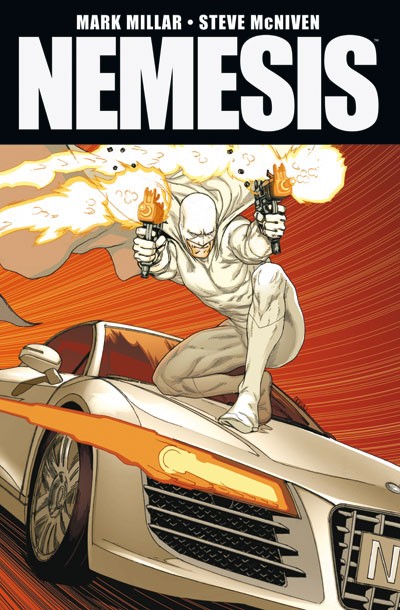 After having given up on Mark Millar after his miniseries SUPERIOR, which I found underwhelming, I’ve been pleasantly surprised by his latest creator-owned titles, Starlight, Jupiter’s Legacy, and MPH. I also read his Marvel 1985 miniseries earlier this year, and liked that too. So I thought I’d give some of Millar’s other books that a missed a shot. So here we have Nemesis, originally a four-issue miniseries which Millar repeatedly described as “What if Batman Was The Joker?” More accurately is it’s what if Bruce Wayne used all his skills and wealth to be a criminal, and then went after Jim Gordon?

The problem with this story is that Millar keeps trying to impress us with how brilliant, prepared and unbeatable this Nemesis character is. But it’s all SHOW not TELL. Nemesis can basically do anything, be anywhere, he knows everything, but we’re almost never told how. The explanation is just supposed to be, because he’s really really rich. So we’re just supposed to accept that he can afford all the tools necessary to do what he does, no matter how far it stretches credibility. There’s simply no way I can give details about what I mean without spoiling the whole darn thing, so if you haven’t read this series yet and are planning to, read on at your own peril.

We start in Japan. Nice little fake-out with the police breaking into the wrong building. But, dang, an entire skyscraper gets toppled? Right off the bat Millar’s gone over-the-top with the violence. And the scene with the train? It’s 20 seconds away and yet that Inspector didn’t hear it coming until Nemesis told him about it? Then in America there’s more violence for Blake Morrow’s debut scene, but I guess it shows how effective Morrow is at what he does. Now we cut to Air Force One in the sky. The two military escort jets just explode in mid-air and somehow Nemesis is running on top of the plane. Standing on the tip (again, this is still in mid-air) he uses a Very Big Gun to shoot he pilot and co-pilot from the outside, then gets in and takes over the controls, lands the plane in the middle of the city crashing through buildings, other cars, and into a gas truck causing a major explosion. Nevertheless he survives and is able to get away with the President as his captive.

2nd issue, we open with Nemesis’ origin story, which Millar ripped off from the Batman villain WRATH or possibly the JLA villain Prometheus. Then Nemesis is show to be committing other big crimes in the city, while taunting Marrow, including bombing a sports stadium, stealing the Hope diamond, and beating two old people to death. Nothing too unbelievable there, but then pumping nerve gas into the Pentagon, killing everyone in it? And publishing all of The Pentagon’s classified info on the internet? Again, how? The car chase, with the special car that turns into a motorcycle is cool and “comic-book-Y” enough that it doesn’t bother me.

Then next issue we get the big prison escape. First, even as the story began I thought it was conveniently stupid of Morrow to release his family from protective custody before they caught all of Nemesis’ henchmen. The description of each of those henchmen and their specific abilities in this issue is the closest we get to an explanation for how Nemesis could accomplish certain things, like arranging his escape from prison. But then Nemesis single-handily and without weapons beats 97 cops to death at once?!? Good grief. But that’s not even the most unbelievable thing this character does in this issue. I understand that he could afford to buy all those new identical sports cars, but how in the bloody hell did he get all of them into the parking lot of the prison without anyone noticing?!? And the bit with Marrow’s children? First, how cliche can you get? The pious Catholic family man has a gay son and a daughter who got an abortion? And Nemesis injecting the daughter with her own brother’s sperm is gross enough, but then there’s the fact it only took one insemination session for the girl to be successfully fertilized, and they know she’s pregnant that same day (that’s not how real-life in-vitro works), but he’s got a way to rig her womb to collapse, and leave her permanently infertile, if she gets another abortion? Oh please.

And the grand finale in the final issue. The fake-out with Howard Andersen was fine, but then Nemesis sets up his big death trap in the White House. That’s right, somehow he was able to take out the White House like he did the Pentagon before. The revelation that Morrow’s trusted Sergeant Lee was really working for Nemesis did explain some of how Nemesis got away with what he did, but not enough. And I know Millar thinks this was a clever twist, but the big reveal that Nemesis isn’t even who he said he was, and that this isn’t a personal vendetta against Morrow, he’s just some random nameless rich guy, instead of intriguing I found that to just basically mean that the whole story I just read was pointless. And the gunfight, where Nemesis is killed, but Blake survives, only to flatline in the hospital at exactly the time Nemesis predicted he would, how could he have known that? Then Morrow is revived and we jump forward to the happy ending, and the other big reveal about this vast mysterious organization that trains rich people how to be super villains. LAME.

The premise of this miniseries is great (even with the twist at the end) but, unfortunately, Mark Millar just wasn’t clever enough to write it well. Not much logic to anything the villain does. He’s a big badass who is always one step ahead of the hero, simply because that’s how Millar writes him. His plans work out because Millar says they do. That’s all. This is the epitome of lazy writing. The comic doesn’t work for me at all.

Except for the art. Steve McNiven’s art in this book is beautiful. It’s the only thing keeping me from giving this book an F.