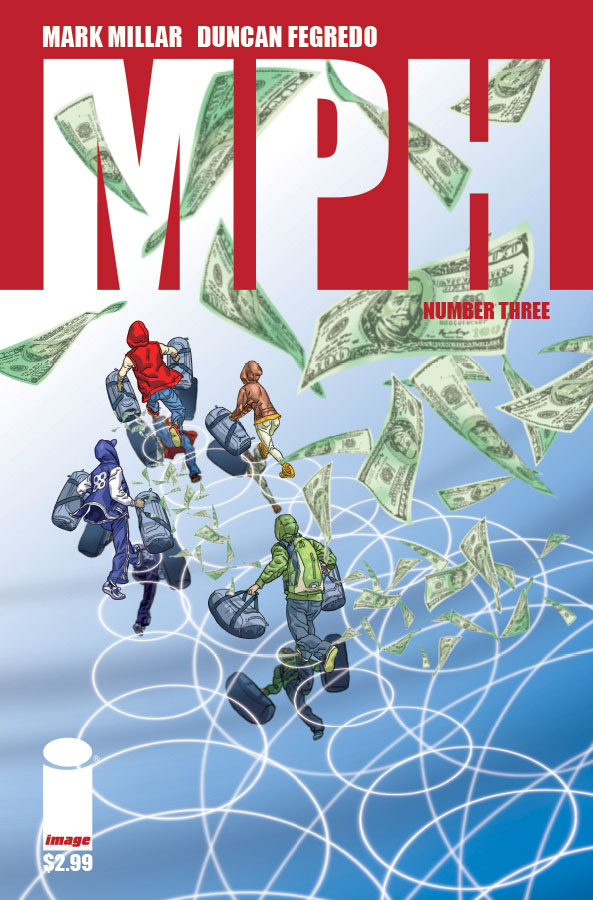 Yes, it’s been almost 3 months since the previous issue of this series. I could make some kind of joke about the irony of a book about super-speed coming out so slowly, and how it’s too bad that artist Duncan Fegredo doesn’t have any MPH pills for himself, but I won’t. I’m just glad this issue is finally here.

So Roscoe, Rosa, and Chevy have recruited Rosa’s brother, whom they call “Baseball”, and begin to plan their crime spree. Roscoe is the leader and seems to have everything planned out, including the eventuality that their limited supply of MPH pills is going to run out at the end of the month, so they need to maximize their abilities while they can. Using their super-speed they rob multiple banks and rich businessmen, becoming folk heroes in the process, as they also give some of the money to poor people. Meanwhile the government is taking the mysterious Mr. Springfield to California where he promises to catch them. Chevy and Baseball are determined to try to find another supply of MPH because they don’t want to have to give up their new powers, which leads him to make a daring raid on the White House. The problem is that Baseball is already a drug-addict, who’s been getting high on marijuana and cocaine in addition to taking MPH, which causes the MPH pills to begin to effect him by causing his powers to malfunction at inopportune moments, which threatens the entire plan. This issues ends with a rather unexpected cliffhanger which I won’t spoil, but just say that takes this series much further into the direction of science-fiction than I anticipated. I’m really intrigued by what Millar’s got planned here.

I continue to be impressed with the way super-speed is depicted in this series, it’s not in the traditional show a character running really fast with speed-lines and blurred backgrounds that you see in The Flash comics. It’s usually shown as either the characters moving normally while everything in the background is static, or we’ll see the characters moving at normal speed in one panel and then in the next panel we’ll see the aftermath of their actions, putting us in the POV of how super-speedsters must look to the public. It’s pretty clever. Millar continues to write Roscoe and Rosa as basically good-natured kids who see themselves as modern-day Robin Hoods who are just having some fun while screwing the system that has screwed people like them, although there are times when some of Roscoe’s socio-economic rants seem a little preachy, like Millar is just using him as his own personal mouthpiece. But I like the build-up to the potential conflicts within the group as we see not only Baseball’s recklessness but it also it looks like Chevy might be harboring some jealousy that could surface later. So, combined with Fegredo’s steller (but slow) artwork, I continue to be interested in where this story is going.

Hopefully the next issue won’t take as long…

← Giving Up On Your Dream?
Superman Unchained #8 →