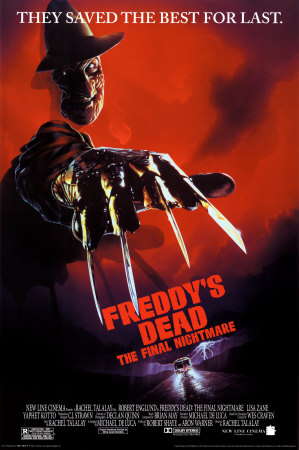 Although she survived the last film, they did not bring back Lisa Wilcox’s Alice Johnson character, even though she would have been the perfect foil to “permanently” destroy Freddy. Reportedly early scripts for this film did include her and her son Jacob, who would now be a teenager, as well as the spirits of the “Dream Warriors”, who are now patrolling the dream-world to protect it against Freddy. That sounds like it could have been good, but instead we got this mess of a film which had no returning characters (except for Robert Englund as Freddy, of course) and not much connection to any of the previous films.

Set 10 years after the previous film (so, 1999? Although if you factor in that A Nightmare On Elm Street 2: Freddy’s Revenge was supposed to take place 5 years after the original film, which was in 1984, then it should be around 2004 when this film takes place…oh nevermind), we learn that all the children in Springwood have been killed by Freddy now, so all that’s left are a bunch of adults who have subsequently gone crazy in their grief. That’s bizarre enough. And it originally focuses on a random teenage boy (Shon Greenblatt) who has no memory of who he is or where he’s from, so he’s just called John Doe, and he’s being taunted in his dreams by Freddy. He’s eventually taken by the police to a Home for runaways and abused children run by social worker Maggie Burroughs (Lisa Zane). Maggie tries to help him find out who he is, and John comes to believe that he’s Freddy’s child (which should have been obvious that he wasn’t because he’s way too young, Freddy was killed long before John would have been born), but then in an interesting twist it turns out that Maggie herself is actually Freddy’s daughter. We learn more of Freddy’s background, that he was married and had a daughter, but then he beat and killed his wife and that’s when Katherine (Maggie’s real name) was taken away from him. Now he’s trying to use Maggie to get access to children outside of Springwood. Yaphet Koto plays “Doc”, a dream specialist who works with Maggie and together they come up with a plan to enter the dream-world and pull Freddy out of it into the real world so they can kill him, which is the same strategy Nancy used in the original film, but obviously didn’t work. But we’re supposed to believe that this time it will work, and in fact this is the first film in the franchise that ended without any hints to Freddy’s survival.

I didn’t mention any of the other kids at the home that Maggie is counseling and that Freddy goes after because, frankly, none of them or their death scenes are particularly memorable. The various celebrity cameos, including Rosanne Barr and Tom Arnold, Alice Cooper (who plays Freddy’s foster father) and the one and only Johnny Depp, are way more interesting than any of the main cast. Freddy is once again a wise-cracker with tons of jokey one-liners, not scary at all. We get the added back-story that Freddy’s power comes from three supernatural demons who encountered him just before he died and chose him to be their vessel or something. And when Freddy is blown up by a stick of dynamite in the real world the demons are seen being let loose from his body. That’s all an unnecessary attempt to explain his existence. The revelation of Freddy’s long-lost daughter doesn’t jibe with previous continuity either as why wouldn’t he have revealed himself to her long before this?

Oh yeah, and did I mention that the final act of the film was in 3-D? No I didn’t, because that was stupid too.

There’s not all that much to recommend about this film, other than it just being another chance to see Freddy in action. It feels almost completely separate from the rest of the franchise, and can be ignored. I was originally thinking of giving this film a D, but I gave the 2nd film a C, and I can’t say that this is really worse than that one. Neither one is a favorite of mine, but they’re both mostly forgettable. So…