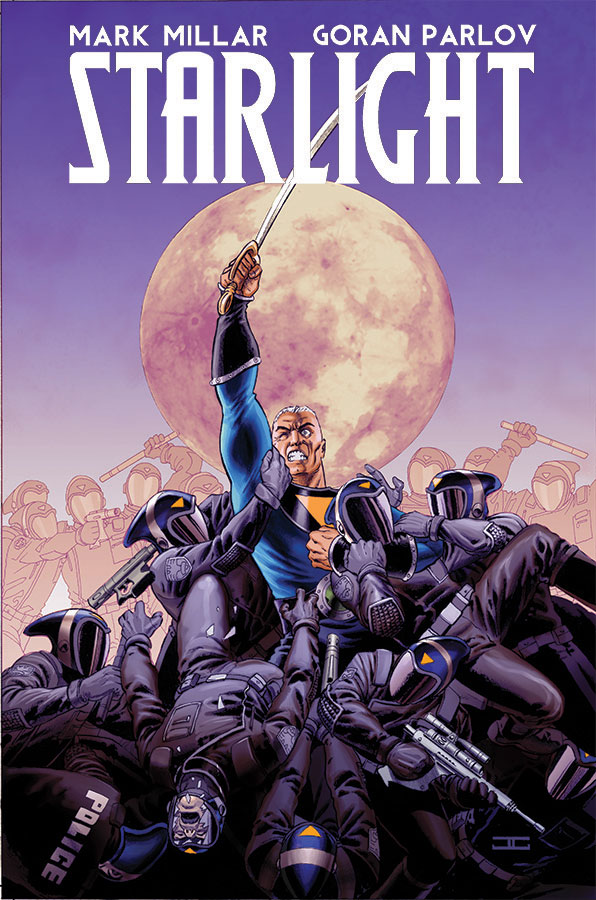 This is tough issue to review, because I really don’t want to spoil anything, but then that limits what I can say. I mean, on the one hand this is the final issue of a 6-issue miniseries, so I assume that if you’re bothering to read this then you’ve been reading the previous 5 issues and if you haven’t then you’re not really interested anyway. On the other hand you may be one of those people who waits for the trade, which is understandable with Mark Millar comics since he tends to work with artists who are good but slow.

Well, okay, I’ll try my best, but this is going to be brief. In the last issue all of the rebels had been capture, except for Duke who is missing and presumed dead, and are about to be executed in front of the entire planet. But we of course know that Duke isn’t dead. In this issue, he is all by himself and prepares to rescue the rebels and liberate the planet. But how the heck can one old man do that all by himself? That’s what you need to read the book to find out!

I guess it’s not really a spoiler to say that Duke wins in the end and saves the day, is it? I mean, c’mon, you knew that was going to happen, right? But the trick is to see how he does it. All I will say is that it is action-packed and inspiring. The book doesn’t shy away from the fact that Duke is an old man and hopelessly outnumbered yet somehow Millar makes it seem completely realistic (well, as “realistic” a story about an conquered alien planet can be) that Duke is able to do what he does. And I’ll say that the story ends on a high note. THAT’S ALL.

I love this story. Millar was going for the feel of classic sci-fi space opera stories and succeeds on all levels. This has none of the over-the-top action or vulgarity that Millar’s work has been associated with. This is good all-ages science fiction. And it’s all beautifully illustrated by Goran Parlov who handles the exciting action moments just as well as he handles the quiet character moments. This has been a great series that I highly recommend.

Now bring on the movie!