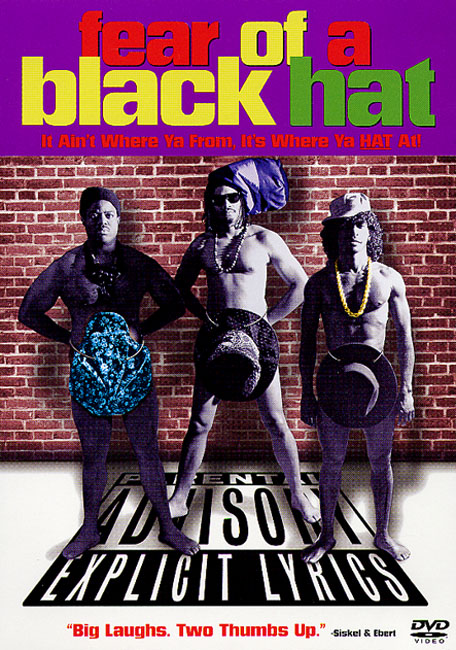 You know how sometimes two movies with a similar premise will get made and released around the same time? Like Olympus Has Fallen and White House Down last year, or Deep Impact and Armageddon back in 1998. Well, in 1993 the same thing happened when two comedies about fictional gangsta-rap groups were released. In March, CB4 starring Chris Rock came out and was a hit, while 3 months later this film came out and flopped. I saw CB4 in the theater when it came out (and loved it) and didn’t see this film until a couple of years later on TV, and in retrospect this was the superior film.

Presented as a mockumentary, this film owes a lot of inspiration to the classic This Is Spinal Tap (some ads for the film even used the phrase “This Is Spinal Rap”). Like that film, this film shows a music group go on tour, break up over creative and personal issues, and eventually reunite. And as a parody of Spinal Tap’s story that all of that bands drummers end up dying under mysterious circumstances, this groups managers (who are all White men, of course) have a history of getting shot and killed under mysterious circumstances.

Kasi Lemmons plays Nina Blackburn, the filmmaker who is making this documentary about the gangsta-rap group N.W.H., which stands for Niggas With Hats, and consists of rappers Ice Cold (Rusty Cundieff), Tasty-Taste (Larry B. Scott), and their D.J. Tone Def (Mark Christopher Lawrence). Through interviews and flashbacks Nina explores the history of the group, how they all met, and then their various struggles to get their music played, switching through several record labels, and battling censorship. Despite their materialistic, violent, and vulgar lyrics, Ice Cold always tries to spin the group’s message as having a deeper politic and socially conscious message. Such as in this scene (contains NSFW language):

Over the cross of the film, many aspects of hip-hop culture and rap music are satirized. The group N.W.H. itself is both a parody of N.W.A. and 2 Live Crew, with a dash of Public Enemy thrown in. Just as the group is at the peak of their popularity, divisions arise when Tasty-Taste gets a new girlfriend named Cheryl C. (Rose Jackson) who begins to convince Tasty-Taste that Ice Cold is hogging the spotlight in the group, especially after Ice Cold gets a starring role in a movie called New Mack Village. Cheryl C. is trouble, and when Tasty-Taste catches her and Ice Cold in bed the group breaks up. They each begin solo careers, Ice Cold starts doing dance music ala M.C. Hammer and C&C Music Factory. Tasty-Tasty concentrates on making diss records aimed at Ice Cold, while Tone Def starts making alternative rap music.

After a year apart, the group reunites for a concert, and we get a happy ending. During the credits we’re told that they’re working on a new album, and that Nina Blackburn and Ice Cold had a child together and are engaged to be married.

This film is intelligent and funny with over-the-top humor that verges on slapstick without being silly. It’s a shame that it’s been so overlooked.

Fear of a Black Hat