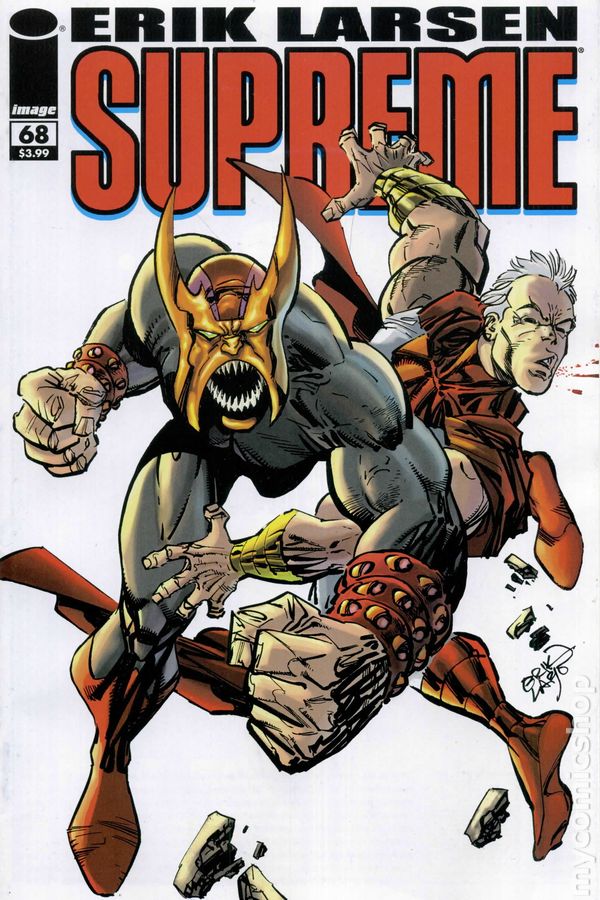 As I said in my reviews of the first 40 issues of SUPREME, the biggest problem the book suffered from was a lack of a consistent creative team to guide it. The book went through multiple writers and artist during this run, until Alan Moore took over, but he rewrote the old character. So I was excited when I heard that Erik Larsen was reviving the title, bringing back the original concept of SUPREME. So with one person writing and drawing the title I was sure we’d finally get to see the original concept of SUPREME fully executed. With his first 5 issues, Larsen had been doing a very good job, so I was sad to hear that the sixth issue would be his last. And just when it was really picking up steam! Dammit.

In the aftermath of his viscous fight with Omni-Man in the previous issue SUPREME’s unconscious body was whisked into space by the a being known as Khromium. Larsen clearly did his homework on the original run of this series as it was in issue #4-6 published 20 years earlier that SUPREME faced the alien warrior Khrome. 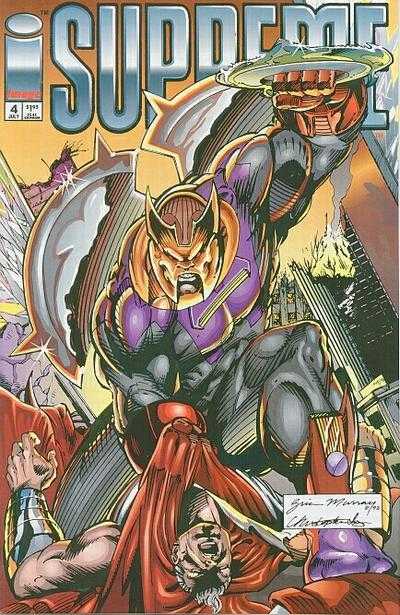 SUPREME defeated and killed Khrome, and now Khrome’s son Khromium has arrived to avenge his father’s death. Khromium has whisked SUPREME back to his homeworld in deep space, where SUPREME is facing a bunch of other alien warriors in a gladiator-style arena, as thousands watch. The idea is that the other fighters will soften SUPREME up, and then it will be Khromium’s turn to face SUPREME and finish the job.

Meanwhile back on Earth, Ethan is trying to get a job as a comic-book artist, only to be rejected. Apparently in addition to losing his powers he has lost his artistic skills. He then meets up with Sister Supreme to commiserate over their inability to properly adjust to this new reality. They also discuss the exact nature of these continuity revisions that they’ve experienced, and wonder if it’s possible that some version of The Supremacy and Daxia could still exist? After a romp in bed (which is a little weird – aren’t they kinda the same person?) they join up with the other Supremes and Darius Duck for a training session where they utilize some armor and weapons that Duck has invented to try to use against SUPREME. That’s a funny scene in itself. Afterward, the Supremes still aren’t sure if they can trust Darius Duck not to double-cross them anyway.

Meanwhile, out in space, SUPREME and KHROMIUM begin their fight and, yep, it’s a doozy. Larsen really goes all-out to give us a battle for the ages. I don’t want to spoil too much but, way back in the first issue of Supreme, Rob Liefeld wrote that he was to be a character with: Not just the strength to life cars or level mountains, but power enough to destroy entire planets.

When this issue ends, SUPREME is even more powerful than ever, more ruthless than ever, and on his way back towards Earth. Also, Diana Dane makes a return appearance, with some surprising news of her own. Suffice to say Erik Larsen ends his run with a BANG and several open plot-threads.

This was disappointing to finish, because in these 6 issues Larsen showed that he had a great handle on this character, I really wish he would have stayed on the title longer. He followed up effortlessly from Alan Moore and then quickly made it his own. Along with Cory Hamscher on inks, who compliments Larsen’s art style, we got a dynamic visual style for the character. Maybe there could have been little more characterization of SUPREME, seeing him adjusting to the new reality after being gone so long. But overall I am happy with how this run turned out, and I highly recommend it, not only to longterm SUPREME fans as well as fans of Erik Larsen’s Savage Dragon and other works.