The previous issue ended with the surprising appearance of Omni-Man. I assume this was done as a sort of wink towards Alan Moore’s run on this title. In Moore’s run, SUPREME was a comic-book artist in his secret identity, drawing the adventures of a fictional superhero called Omniman for Dazzle Comics. In one issue, Omniman mysteriously came to life, and fought Supreme.

Now, in this reality, Omni-Man was the father of the superhero INVINCIBLE by Robert Kirkman, which is a most excellent series. However, as I said in my review of SUPREME #65, the timeline is confusing. At the time that this story took place, Omni-Man hadn’t been active as a superhero on Earth for many years, nor had their been any previous interaction between him and SUPREME, yet they act as if they know each other and SUPREME even references events that took place in INVINCIBLE #12, which was 8 years earlier than this issue. I have no idea how this is supposed to work, but ignoring that, we get a royal superhero battle between these two titans. 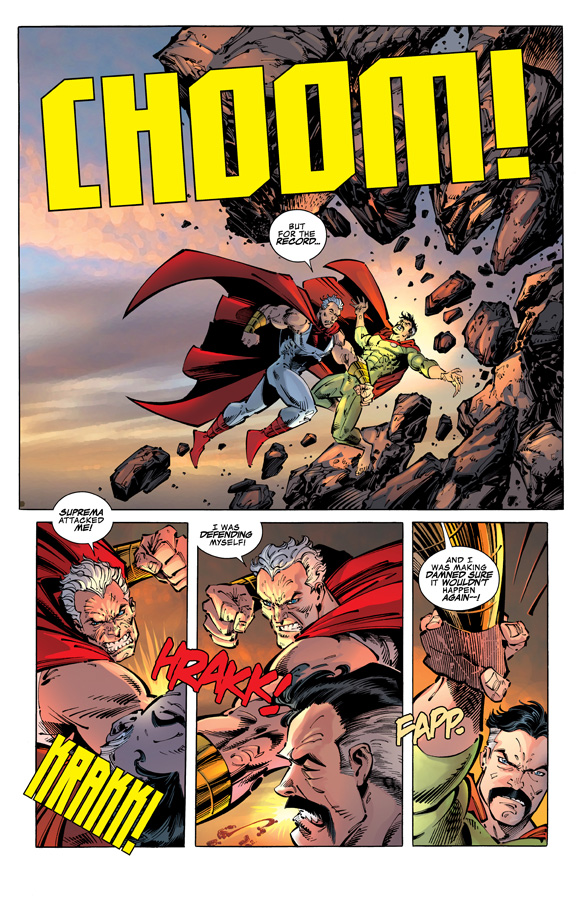 At this point it would be easy to say that all Erik Larsen has really been doing with SUPREME since taking over this title is having him get into one big fight scene after another (a trend which continues in the next issue), but as I keep saying, violent battles is one of the things that Larsen draws best, so I’m not really complaining. Plus he continues the subplot of Ethan and his attempts to adjust to this new reality. Ethan has somehow gotten an apartment (I think it’s implied that U.S. Government contacts are helping him and the other depowered Supremes) where he is trying to draw samples to get a job as a comic-book artist. Squeak stops by, not having much luck adjusting to this new reality either (due to the fact that he’s a human-sized talking mouse). They hear about SUPREMA getting beaten last issue, and they, along with Sister Supreme, drive out to the scene of the battle to get her and take her to the hospital. Afterward they meet up with original Supreme and 50’s Supreme at Diner, where it is decided that they have a special responsibility to find someway to stop SUPREME, and that includes teaming up with Darius Duck to do so.

Meanwhile the SUPREME/OMNI-MAN battle continues for several more pages. In scenes reminiscent to Superman vs. Zod in MAN OF STEEL, the two heroes smash each other into building and trains, causes all sort of damage. Finally they both knock each other senseless, with Omni-Man regaining consciousness just in time to witness SUPREME being carried away by machines…

Another satisfying issue. I’m still not sure about the inclusion of the variant Supremes and, like I said, the appearance of Omni-Man doesn’t quite line-up with the events in the Invincible series, but as a stand-alone title it works just fine. I was continuing to enjoy this title.