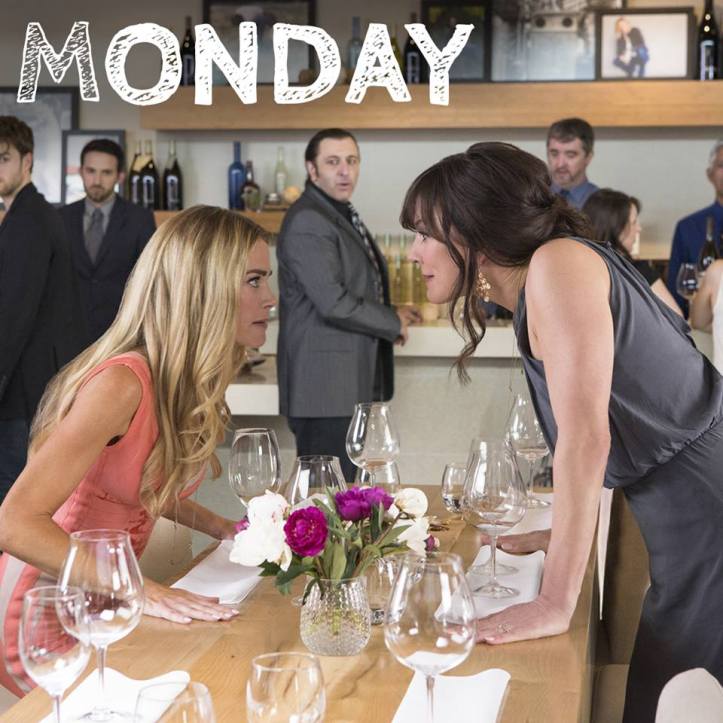 I must say that, even though I enjoyed the first episode immensely, part of me did (and still does) still wonder if the premise of the show is strong enough to fuel a series. I mean, how many older woman/younger man jokes (and “ha ha, I’m banging your mom” jokes) can you make? Well, I guess we’ll see, but so far, so good.

Tonight’s episode revolves around two main storylines. First, Lydia and Jimmy (Krista Allen and Nathanial Buzolic) decide to try to define their relationship. Jimmy makes plans to take Lydia out on their first official “date”, in public. The problem is that he doesn’t know what to do or where to take her. Once again his womanizing past his referenced here, as apparently he’s never made it to this stage of a relationship before, but he wants to prove to Lydia, and to Nate, that she means something to him. So we see Jimmy struggling to figure out what kind of date he can plan the perfect first date for him and Lydia, which is all the more different because he’s basically broke.

The second plot revolves around Nate’s (Josh Zuckerman) love life, or lack thereof. Jimmy discovers Nate’s crush on Sam (Emma Fitzpatrick), when he catches Nate cyberstalking her, and points out that Nate has had any kind of date or sex since the time Sam started working at the restaurant over a year ago. Nate tries to deny it, and insists that if he wanted to find a woman to date he wouldn’t have any trouble. And after a couple of hilarious mis-steps, he finds himself approached by a sexy and aggressive woman named Pepper, who is played by special guest-star Denise Richards.

The two storylines comes to ahead when both couples end up at winery on their dates. And, of course, it turns out that Lydia and Pepper are old friends. Lydia, rather hypocritically, is uncomfortable with he son dating a woman her age, and soon there’s a confrontation between the two women, which leads to Lydia throwing a drink at Denise’s face (well, at her breasts).

Despite a bit of cheap slapstick-ness, the confrontation between Lydia and Pepper works well, not only because Krista and Denise are two naturally comedic actors and play their parts well, but it also serves as a way to show how Lydia and Jimmy’s burgeoning relationship is, without getting sappy. Pepper is a recently divorced proud Cougar (although she prefers the term “Kittyhawk”), who revels in her ability to attract younger men and use them for sex, and assumes that that is what Lydia is doing with Jimmy. But that is definitely not the case. And Pepper’s bluntness forces both Lydia and Jimmy to admit that. And although the date didn’t go as they’d planned, by the end of the episode we can see that they are at least moving forward.

Jonathan Silverman makes a couple of appearances in this episode, as Nate’s dad and Lydia’s estranged husband Harrison, but is honestly kind of wasted here. Hopefully his role will be expanded in future episodes, as he is a true comedic talent. Likewise I’m still not sold on Nate’s infatuation with Sam. Jimmy, Lydia, and Harrison can all see that he’s hung-up on her, despite his denials, but for some reason she remains completely clueless. We’re shown that it’s because she’ supposedly so happy with her boyfriend Atticus, but there’s not much between them, so it feels like his character is simply there to provide a barrier for Nate.

But, once again, the best scenes in the episode are between Lydia and Jimmy, as Kate and Nathanial have a natural playful chemistry between them. There’s an early scene where they’re about to have sex right in front of Nate, which turns out to be a nightmare, and a later scene where they’re attempting to engage in some roleplay while having sex. It’s funny stuff. Show co-creator/writer Richard Keith has a small but funny bit-part in this episode, as the hostess at the winery, who gets more involved in the antics of the two couples than expected. Overall, the series continues to entertain me.

Significant Mother airs Mondays at 9:30pm on The CW