What If Fred Thompson (R.I.P.) was President?

So former politician and actor Fred Thompson died on Sunday. It got me thinking about his brief Presidential run in 2007. I remember, in the early months of the election, his popularity started rising thanks to a series of Youtube videos he filmed taunting Michael Moore and others. But when he actually entered the race his campaign fizzled out pretty fast. But I was just thinking, what if things went differently? What if he had actually gotten the GOP nomination and then gone on to win the general election?

Don’t laugh. Stranger things have happened. It’s not like he’d be the first actor elected to high office. 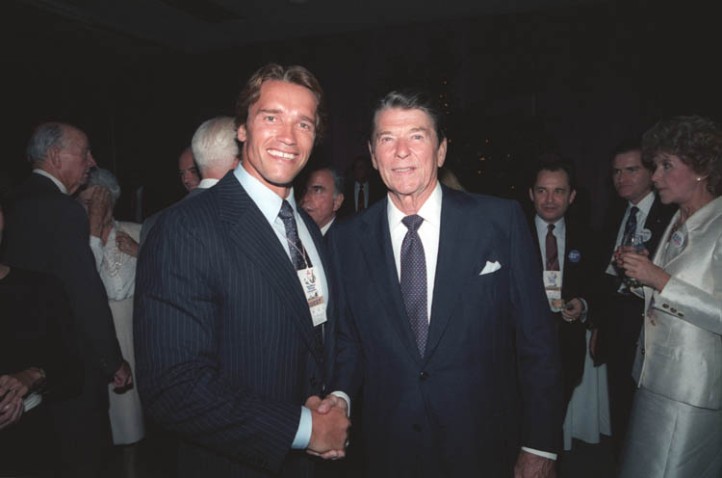 But say he got elected and sworn in in 2008, and did a fair enough job that he’d gotten re-elected in 2012. Well, here we would be, almost exactly one year before we voted for a new President, and our current President dies. I wonder how that would it effect the election?

The Democratic candidates (who would probably include Senators Hillary Clinton and Barack Obama, if neither of them ran again in 2012) would have undoubtedly been trashing Thompson’s record as President, but now would have to probably tone down their rhetoric, as it may come off as tacky, going after a dead man. So this would be a bit of a problem for them.

On the Republican side, it would depend on who was running, and whom Thompson would have picked as his running mate. If Thompson’s candidacy was relatively calm, and his V.P. was running for President, the GOP would have likely mostly coalesced around him or her, similar to the way the Democratic establishment early on attached itself to Hillary Clinton, so there would probably be fewer candidates on that side, with the Democrats having a more wide-open field, in a reversal of what’s going on now. But then the V.P. would become President. And I’d bet that most of his or her rival candidates would drop out, and everyone would get behind the new President. That would also affect the democratic candidates, as it would no longer be an open election, they would be running against an incumbent President.

Historically, 8 Presidents have died while in office. Each time, the V.P. succeeded him and finished out the President’s term, although only three of those men (Theodore Roosevelt, Harry S. Truman, and Lyndon B. Johnson) then went on to get elected to a full-term as President on their own. But among those who didn’t, I have long been fascinated by the story of President John Tyler.

In 1840, William Harrison got elected the 9th President of the United States, with John Tyler as his running mate. One month after they were inaugurated, Harrison (who was 67 at the time, making him the oldest man ever elected President, until Ronald Reagan was first elected President at age 69 in 1980) died of pneumonia. So now what? You’d think the Founding Fathers would have carefully considered this possibility, and therefor clearly spelled out in the U.S. Constitution what should happen, in case of such an eventuality, right?

At the time, all the Constitution said was:

“In Case of the Removal of the President from Office, or of his Death, Resignation, or Inability to discharge the Powers and Duties of  said Office, the same shall devolve on the Vice President”

Think about it…what EXACTLY does that mean?!?

There was much interpretation about what should happen next. The majority of Harrison’s cabinet initially declared that Tyler was “Acting President” while some opponents tried to call for a new special election to vote for President. But Tyler supposedly met with the then-Chief Justice of the Supreme Court, who assured him that Tyler was now the rightful President, and had himself sworn in as President and just took over, serving the remainder of Harrison’s term, but failing to win election on his own 4 years later. According to the ever-reliable Wikipedia.

Tyler’s opponents never fully accepted him as president. He was referred to by many mocking nicknames, including “His Accidency”. However, Tyler never wavered from his conviction that he was the rightful president; when his political opponents sent correspondence to the White House addressed to the “vice president” or “acting president”, Tyler had it returned unopened.

Nevertheless, Tyler’s actions set the Precedent for Vice-Presidents to succeed a deceased President, as 7 more men did before the rule was made official in 1967 via the 25th Amendment.

And the rule hasn’t been invoked since, thankfully, due to lack of need. But, back to Fred Thompson. He died of cancer, which isn’t an age-specific thing, and we could all check-out at any time. You just never know. But this does make me wonder if maybe we, the voters, should pay a little more attention to the age of perspective Presidents? And how much do we want to risk electing a person who is more likely to not live through their Presidency? Or possibly become mentally incompetent (as was suspected of Reagan during the later years of his Presidency)?

Hillary Clinton turned 68 last Month. If she is elected President, she will be 69 when she is sworn in, in Jan. 2017. If re-elected she would be 73 at the beginning of her 2nd term, and would be 77 at the end of her 2nd term. And there have been some questions raised about her current health. But with the Clintons, separating fact from fiction has never been easy…

And Bernie Sanders, at age 74, is 6 years older than Hillary Clinton. Can we afford to elect a man who would be 75 years old when sworn in for his first term? If then re-elected he would be 83 when he leaves office. I haven’t read any rumors about his health yet, but, still…the dude is old.

But their front-runner, the bombastic Donald Trump, is 69. He would be 70 (and a half) when sworn in to his first term, 78 when he left office if he elected to a 2nd term. It’s weird to think that the runner up (and in some cases the leader) in the polls for the GOP nomination is Ben Carson who, at age 64, is the most youthful of the top candidates!

Now, I haven’t heard anything about Trump or Carson’s health either. But, let’s face, POTUS is a tough job. It ages you. Look at any of our living Presidents, compare pictures of them from when they entered office to when they left office. Even look at youthful energetic Barack Hussein Obama…

And he’s still got over a year to go!

I don’t know. Maybe we need to start being a bit more ageist about whom we elect…

Anyway, my condolences to the family and loved ones of Fred Thompson.