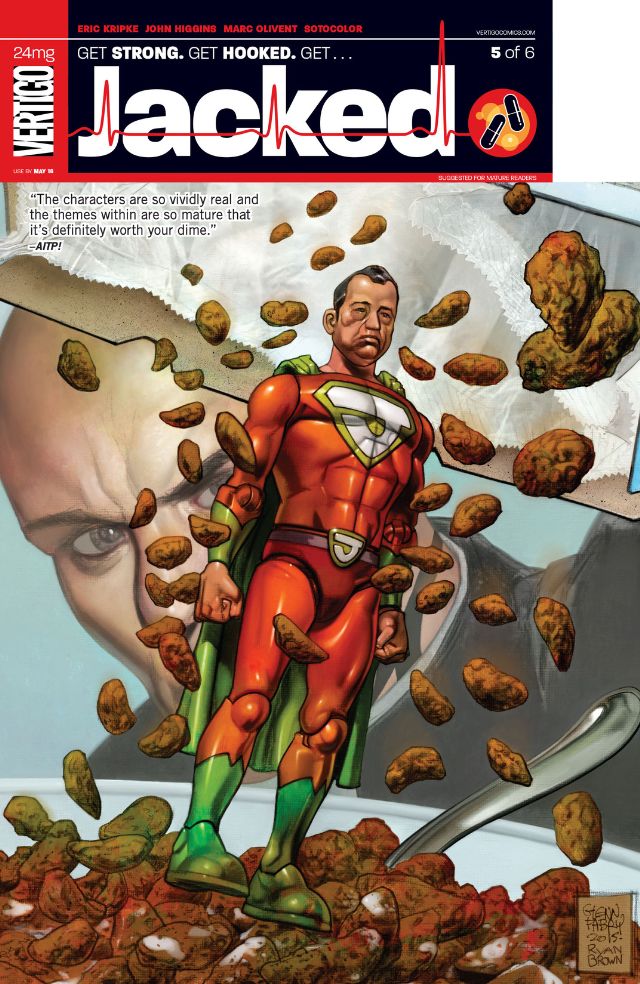 First, I will note that it was this cover which caught my eye, and lead to me getting this whole miniseries, which I originally assumed was closer to a traditional “superhero” story (albeit one on DC’s Vertigo imprint, which means I know it wouldn’t be that traditional). But it has turned out to be a much deeper story than that.

This has to be one of the wackiest far-out comic books I’ve ever read. Josh, hopped up on two old Jacked pills at once, has busted into Ray’s compound, ready to confront about a dozen heavily armed men. Jessica is right behind him. The problem is that Josh is now starting to trip out and begins seeing all sorts of crazy visions. Past loves, favorite cartoon characters come to life, superheroes (including Superman and Batman) past and present visions of himself, giant candy bars and a room full of giant female boobs, are just a few of the crazy images we’re treated to over the course of this issue. In Josh’s mind he and Jessica are actual superheroes, and Damon and Ray are supervillains. But Jessica, who is still seeing clearly (well, “clearly” for her), manages to keep Josh pointed in the right direction. And, as I’ve suspected, she also reveals her true nature in this issue.

This was a clever direction for Kripke to take this story in. He took what could have just been a typical big bloody fight issue and, by adding the hallucinations, made it something unique and unexpected. Marc Olivent steps in to draw what appears to be the majority of this issue (no specific pages numbers are credited to each artist this time), and while his style is a dramatic change from John Higgins, it works well here because it adds to the sense that what we are seeing, through Josh, isn’t what’s “really” happening. Higgins steps in for the final pages, after Josh snaps back to reality. It’s a good affect.

And once again we get a thrilling cliffhanger. And what I love best about this is that I honestly have NO IDEA how this will be resolved in the next and final issue. That is a feeling I almost never get from “traditional” superhero comics, these days.

So that’s where this series is up til now. One more issue to go, due at the end of next month. If, like me, you have missed out on JACKED then, like me, now is the time to get caught up! It’s a great story, you’ll love it!. A+