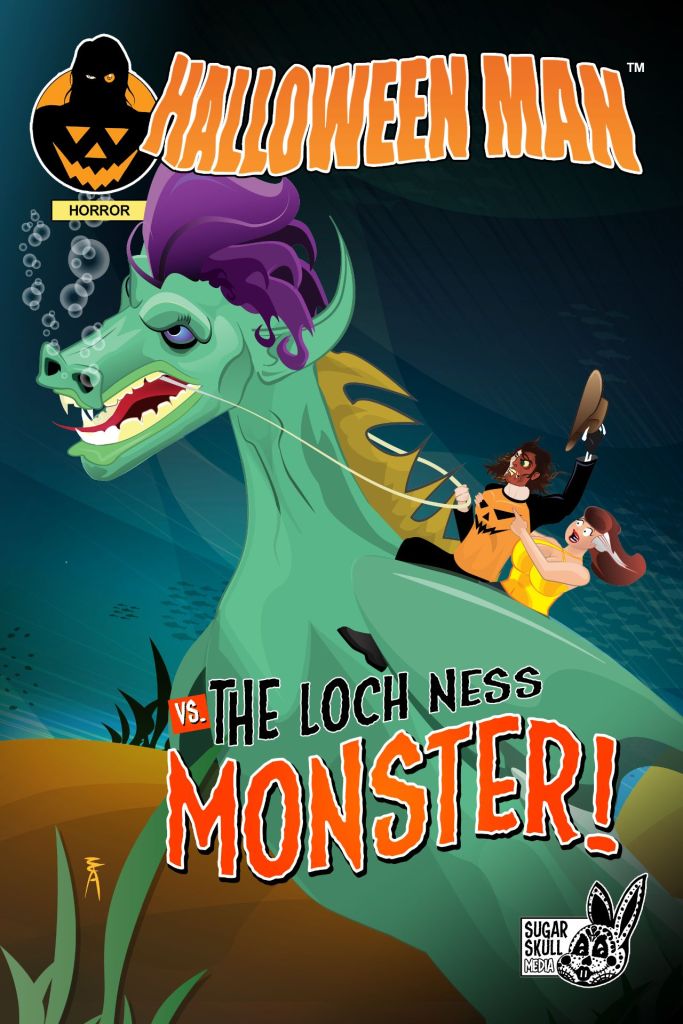 Today I’m reviewing the latest “Halloween Man Special.” I guess these could be compared to the “ANNUALS” that comic-book companies used to (but now rarely) publish, in that each issue is a done-in-one story that doesn’t necessarily tie in to whatever ongoing story or plots that are being told in the regular series. The gimmick with the Halloween Man specials appears to be that each one has Halloween Man facing off against some other well-known fictional horror character or myth, or with other comic-book characters. So this issue has our resident hero traveling to Scotland (at the behest of the Scottish government, no less) to capture the legendary Loch Ness Monster.

In this 15-page story, we’re told that 6 local fishermen have been killed recently, presumably while fishing in the lake, which has led the government to believe that the Loch Ness Monster, previously considered a myth, is real. This is why Solomon (described as an “infamous monster hunter”) has been called in to solve this matter once and for all. Naturally, Lucy has come along, with special scientific equipment of her own design meant to help Solomon helped to capture and pacify the creature. But their plans are disrupted by a famous scientist and skeptic who believes that the monster is a hoax, and accuses Solomon and Lucy of killing the fisherman themselves in order to drum up publicity. So now Solomon’s job is two-fold, as he now he needs to capture the creature and prove that it’s real, not only for the safety of the locals but to clear his and Lucy’s reputations.

I guess it’s not exactly a spoiler for me to reveal that yes, indeed, the Loch Ness Monster does indeed turn out to be real (I suppose the picture on the cover, drawn by Dan Price, and the title of the comic gives that away already), and Solomon has one wild ride as he attempts to tame her. I won’t say much more other than that say that there is a creative twist in this story that explains how she’s been undiscovered for so long. It’s a good tale, with writer Drew Edwards’ trademark black humor on display. And Kevin Atkinson’s artwork in this story is a real treat (although it’s noticeable that he draws Lucy in her previous voluptuous but not quite-BBW figure, so this story must take place before the events in Halloween Man #3). I’d like to see him brought back for further Halloween Man stories.

In addition to the main story, there is a one-page profile on Dragons as a species, explaining their existence in the Halloween Man universe, with an accompanying art image by Mike Furth. And then a two-page report (credited as written by Solomon’s friend Nicodemus, with a small sketch by Paul Tuma) that gives more details about each of the 7 main types of dragons.

Altogether, this is not only a satisfying story for existing Halloween Man fans, but could serve as a decent introduction to the characters for new fans. So if you’re a fan, get it for yourself. And want to help create new fans to keep this series going? Get it for a friend!

Read for FREE on GLOBALCOMIX.COM