MY COMIC STRIP CLUB IS ONLINE! 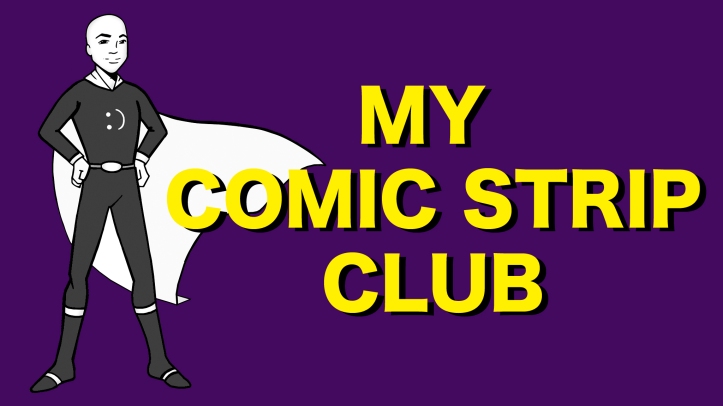 That’s right, folks, in addition to my other talents, I have now added writing comic-strips to my resume! I starting the year 2018 off right, with the launch of a new website (well, it’s a Tumblr blog). This started all thanks to my online friend SAMAX AMEN, who is an artist that I’ve bought many commissions from in the past, well, over a decade now, at least.

Back near the end of August I saw that he was advertising a deal where, for $75 he would draw a 1-3 panel black and white comicstrip for you. This immediately intrigued me, and I became determined to do a strip or two with him. But I had to come wup with a premise and idea for a strip, which turned out to be a lot harder than I expect. I mean, coming up a premise was easy, I thought of dozens of those. When you think about it, most ongoing comic strips have pretty bland premises. GARFIELD, for example, is just a strip about a fat, lazy, Cat and his owner. By itself, that description isn’t exactly revolutionary, but it’s the writing of the strip that makes it memorable. So I would come up with my own idea for a strip, but then the hard part was trying to think of the “stories” to go along with the strip.

After two months, I finally came up with an premise that I thought I could come up with several stories for, and I sent those to Samax in the beginning of November. It seemed like once I got that one idea, my mental floodgates opened. So I was waiting for Samax to complete the strips I’d sent him, I sent another idea to my other artist friend, whom I’ve also gotten many commissions from, CELINA HERNANDEZ. She finished her first strip that same day, so I sent another one. And it was after I had two strips completed that the idea came to me that this might be something I could do on a regular basis. Originally I was just thinking of getting a few strips done, maybe 4 or 5, and then posting them here on this blog. But then I decided to do this as entirely separate project. And thus the idea for My Comic Strip Club (get it? Comic Strip Club, I’m so clever) was born.

My goal is to run this new site for at least one year. With a minimum of one new strip being posted each Monday. Some strips will be “ongoing”, in that I plan to come back to them many times. Others may simply be done once. To start off the site, I’ve posted 4 original strips. As a preview, I’m presenting the first panels of three of them.

BOSS FROM HELL is the strip I’m doing with Celina, and is one of my ongoing strips. It’s set in a office where the Boss happens to be demon. Or he may even be Satan himself. I don’t know, I don’t plan to ever reveal his actual name or status, he’s simply THE BOSS. I also don’t think I’ll ever reveal the names of the various employees, whose lives THE BOSS is intent on making as miserable as possible. When I send the scripts to Celina I simply refer to the employees who appear in that particular strips as “Black Man”, “Asian Woman,” etc. This is deliberate choice, as I think it exemplifies how THE BOSS sees them. They’re nothing to him, simply mindless peons meant to do his bidding. So their identities are irrelevant. I like doing this strip because it’s fun to come up with the Boss’ evil plans. And I figure it’s one of my most relate-able ideas, as who hasn’t had at least one boss that they hated working for? 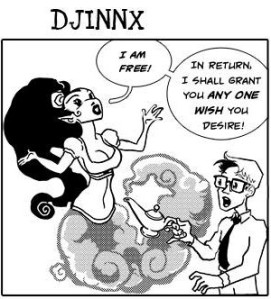 DJINNX is a character I created years ago as a possible comic-book superhero. But while thinking of comic strip ideas for Samax, I realized she would make a good lead for an ongoing strip, as in each one we can see her granting someone’s wish, but always with an ironic twist. I plan to leave her motivations ambiguous. Is she deliberately sabotaging people’s wishes, just for her own amusement, or is she simply not good at her job? That will be for you, the audience, to decide.

RUFF CROWD is a one-off strip I’ve done with ROGER A. WILBANKS. He has been writing and drawing his own scripts THE PORTLAND EXPRESS and CENTRAL ZOO for years, so when I started writing my own strips, I would send them to him as the artists sent them to me, for his advice and criticism. He has been extremely helpful, including slightly re-arranging the dialog in the first Boss From Hell strip to make it flow better. So I wanted to do a strip with him, but he’s too busy to do it on any kind of regular basis, but he has agreed to squeeze in an occasional strip with me now and then. The first result is this one, which I specifically came up with for him. I figured since he’s been drawing talking animals in Central Zoo, I would think of talking animal strip specifically for him. I came up with this, which originally had a different ending, but Roger suggested something else which I liked even better, so this would be my most collaborative strip, so far.

I have to say that I’ve really been enjoying the creative process of putting these strips together. Coming up with ideas, sending them to the artists, and then seeing the finished work is just a blast. And my respect for professional comic-strip creators has increased ten-fold since I began writing them myself. Particularly for the creators who do daily strips, and do them for decades. I can’t even imagine doing that, it takes a much more vivid imagination that I have.

So I hope you’ll come along on this journey I’m taking, click on the image below to get started!