I Almost Married A Serial Killer 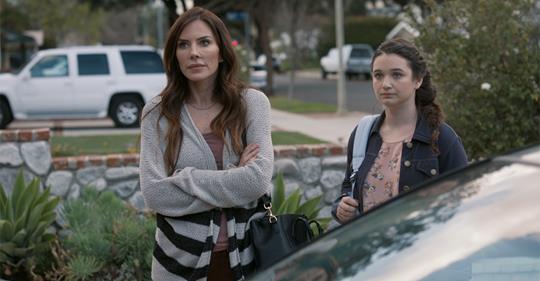 Written and directed by Nadeem Soumah

I just finished this Lifetime Original Movie, which stars Krista Allen, whom y’all know I’m a big fan of (and have met several times). And I thought I’d do a quick review to share my thoughts about it. Krista stars as Camille Fiore, a single mother raising her teenage daughter, Violet (Zoe Lillian), in Philadelphia, who is in a serious relationship with a man named Rafael Dupont (there’s no IMDB page for this film, and the credits show on TV were two small and fast for me, so I am unable to say that actor’s name). One night, while attempting to surprise Rafael, Camille shows up at Rafael’s house and, while trying to find him, stumbles into a secret room in which she finds evidence that he is secretly a serial killer nicknamed The Hunter, who has killed 8 women and is wanted by the FBI. Rafael catches her and attempts to kill her too, but Camille manages to get away. Rafael is arrested and, thanks in large part to Camille’s testimony, is eventually convicted and sentenced to eight consecutive life terms without the possibility of parole. Alls well that ends well. Or so Camille thought.

The film jumps ahead six months, and the FBI lets Camille know that Rafael has broken out of prison and they believe that he will be coming after her now (both because she testified against him, and because she’s the one intended victim that he failed to kill, so this is “unfinished business” for him. Because of this, the FBI offers to put Camille and Violet into the Witness Protection Program for their own protection while Rafael is still on the loose. Camille reluctantly agrees, over Violet’s strenuous objections. Soon, they’re given new identities as Emily and Lilly (I missed their last names) and sent to a small new city (I also didn’t catch that name). But their ordeal isn’t over, as we see that Rafael has managed to pay some unscrupulous doctor to perform plastic surgery on him to give him a completely new face. Then, after killing the doctor, he sets out to track down Camille and Violet.

I can’t say much more without revealing spoilers. I’ll just say that Rafael does eventually find Camille and, once again, they come face to face as he intends to kill her. But you’ll have to tune in for yourself to see how that turns out.

Okay, so overall this is a decent movie, if fairly by the numbers. This is a typical “Woman in danger” film that the Lifetime network specializes in. So if you’ve seen one, I won’t say that you’ve seen them all, but you definitely know what to basically expect.

There are a few issues that could be considered plot holes. The biggest of these is the basic premise of the Witness Protection Program being used here. From my understanding this is usually enacted when the person’s life is considered to likely be endangered forever, I’m not aware of it being used on a temporary basis, as it is portrayed to be here. But in a case like this, where her sole danger is from one man who is an escaped conflict, I would presume that at most the FBI would take Camille and Emily to a safe house, or perhaps just assign a couple of agents to guard both of them as the authorities search for Rafael.  Also, it’s not explained how Rafael got the pile of cash that he used to pay the crooked surgeon, or how he even found such a surgeon to work on him.

Another small criticism I have is the film has a bit of a fake out when it comes to Rafael’s new identity. We don’t see his face when he’s with the plastic surgeon, so we don’t know what he looks like after the fact. Two new men are introduced, both of whom could be him, and we are lead to suspect one more heavily but there’s a bit of a fake-out there. It’s handled cleverly enough, but I actually thought that the reveal of which one is Rafael comes a little too soon. We find out about halfway throughout the movie, although Camille remeans in the dark until near the end of it. I think it would have been a little more suspenseful and shocking if they’d kept the twist a secret from the audience as well until the final act.

Nevertheless, despite those minor complaints, the film succeeds in its goal to be entertaining, and that’s thanks largely to the two leading ladies. Krista and Zoe play off each other well as mother and daughter, and each gets ample opportunity to show off their acting range. Zoe’s character comes off a bit bratty at times, but it’s understandable when you consider how she’s a 16-year-old girl who suddenly has her entire life uprooted. Krista’s character tries to be sympathetic but is primarily focused on keeping her and her daughter safe, and therefore is exasperated at her daughter’s attitude. And Krista’s best scene is the one where she first confronts Rafael (I really do wish I knew that actor’s name, as he was very good in it too) and realizes that this man that she loves is a monster. The look of shock, heartbreak, and fear on her face says it all. I would also like to single out Adamo Palladino and Louis Mandylor, who play the two characters who are suspected of being Rafael’s new identity, as each also does a great job in their roles.

Overall, I Almost Married A Serial Killer is a thrilling ride from beginning to end. I recommend checking your local listing to see the next time it’s airing on Lifetime Movie Network.