I saw a post on Instagram recently that got me thinking about a topic that I’ve discussed here before. First, I‘ve made it clear many times that I never intend to have children. And I’ve often found it amusing that I and other intentionally childless people are often accused of being selfish. First, I totally admit that part of my reasoning is based on a selfish attitude. The rearing of children is something that requires immense personal sacrifice in many areas, and I don’t want to make those sacrifices. I like living first and foremost for myself. So, fine, I’m being selfish. 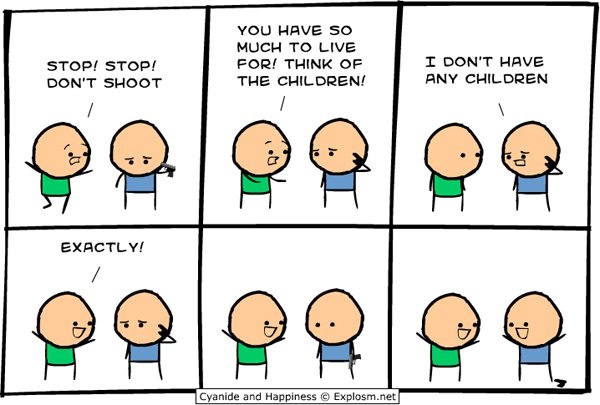 But I also believe that a lot of people who have children are also being selfish in some ways. Or worse, egotistical. Like the common question you hear of “who’s going to take care of you when you’re older?” If that’s your reason for having children then how selfish is that?!?

And then there’s the obsession people have with having biological children, even if they have to go through extraordinary lengths to do so, then that’s where the ego comes in, in my opinion, because it shows that your desire to be a parent is rooted more in a desire to carry on your biological line specifically. And I’m not saying that’s not a natural desire, just pointing out that those aren’t the most “selfless” motives either.

So as I was saying I saw a post from someone whom I shall not name, because I don’t want to make this seem like an attack on them personally, although I know this may seem like it. This is someone who’s sort of a public figure, the wife of a billionaire businessman. She and her husband have two young children (plus he has one adult child from his first marriage – she’s his second wife), and she clearly loves being a mother as she’s always posting pics and videos of her and her children. And, as you can probably imagine, they have a pretty great life, with multiple homes across the country and traveling the world in a private jet, etc. She posted that last year she learned she has an autoimmune disease, which has since been successfully treated but now makes another natural pregnancy dangerous for her. But she and her husband wanted more children, so together they began the process of looking into surrogate motherhood.

Over the next several posts she outlined everything that they went through in researching the process and of eventually finding an acceptable surrogate mother and going through implantation of an embryo created from her egg and her husband’s sperm and implanted that into the surrogate, and it has been successful and now they are expecting their twins.

Hey, it’s their life, and so I’m happy for them. I just joined all the other comments in congratulating them. I didn’t question her directly because that would feel rude.

But I can’t help but think that this is inherently selfish. And as I’ve said before I’m not sure I really agree with the very concept of surrogate motherhood in the first place, and that I think maybe technology has advanced faster than society has. The idea of using women as essentially human incubators seems kind of icky to me. But maybe that’s just me. If the surrogate is an adult and making this choice of her own free will, then that’s her business, right? But still, I don’t know…

But the real problem I have this is, as I said, the couple doing this are BILLIONAIRES. And they already have two biological children, so if they wanted more children in their home to raise and just couldn’t concieve the natural way, why not adopt?

She didn’t mention it, but I wonder if that even occurred to them? They have the resources available to take care of a dozen children if they wanted to. And there are tons of orphaned and abandoned children in America and across the world who need good homes. They probably wouldn’t even have trouble finding healthy babies to adopt, which I hear are often the hardest to find because that’s what so many people want (it’s the older children that are harder to place with adoptive parents), because their financial status would make them seem like ideal parents to many adoption agencies (although I guess I’m just speculating on that). I swear, I don’t want to belittle the disease she has or someone’s infertility issues, but I feel like whether you believe in God or just random chance, I’d say look if you’re not physically capable of having children, especially in a situation like this where you have had a couple of them already, but you still have this desire in your heart to grow your family, maybe that’s a sign that you should look to taking in some child who is already here and who needs a loving home?

But no, instead they went through all of these harder methods just to make sure that they have more biological children. I can’t help but side-eye that decision a bit.

Now, to be fair, this particular couple has given a LOT of money to various charitable causes, so it’s not like they haven’t done their part to make the world a better place. So who the heck am I to even question their lifestyle choices?

But I guess I am. Hopefully I don’t come off like too much of an a-hole for posting this…