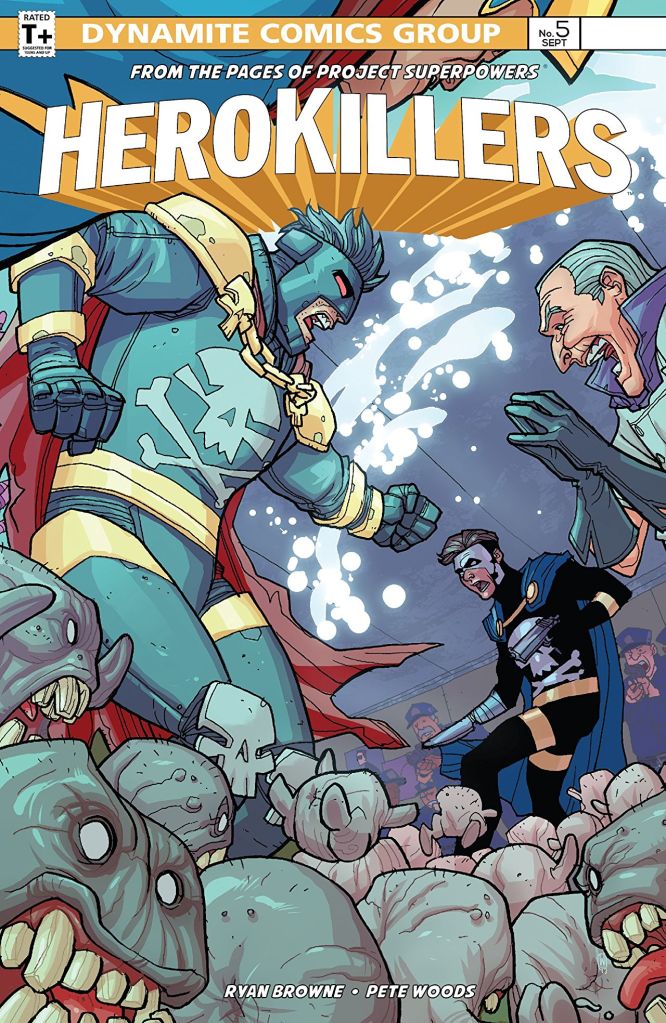 So where were we? Captain Battle arrived to confront Tim, but Tim tries to blast him with Baron Von Physics gun, but hits Captain Battle Jr. instead. Thinking his son was dead, Captain Battle was ready to kill Tim, but Sparky, who has apparently completely snapped and gone insane now, kills Captain Battle (although he doesn’t even realize what he’s doing). The mayor, having learned from Rainboy Boy what Tim has done, gathers all the remaining superheroes and surrounds Tim’s house, demanding he gives up. Tim’s ready to fight, but just then Black Terror, Blue Bolt, and Captain Battle Jr. all show up in a flying car, having escaped from Dimension 42, and Black Terror is ready for his vengeance against Tim. And that’s where we are in this issue.

I really don’t want to say much, other than there are a lot more twists in this story before it ends, with a lot of brutal but not gory violence. And just tons of weirdness. Like, did I mention in any previous reviews that Black Terror has found a sentient hammer made out of meat? Because he did, and he uses it. And I’m not even sure that’s the weirdest thing in this series.

Ryan Browne definitely excels when it comes to writing dialog, the banter between the various characters as the violence erupts around them is very good. I particularly like the way Sparky is written here, as well as the back and forth between Tim and Black Terror.

The story ends satisfactorily, giving us one complete story in this miniseries, while also leaving the door open for further adventures in this particular incarnation of the Project Superpowers universe if that should ever come to pass. And I would be remiss if I didn’t single out Pete Woods for his art. He has a nice clean style, seems like it would be fit for animation. And it works because, as I said here, even though a lot of violence occurs throughout this series, it’s never gory or over-the-top, so it’s suitable for older and younger readers, I think.

This was one of the best comic-book miniseries of the year (that year being 2017). Do yourself a favor and check it out!