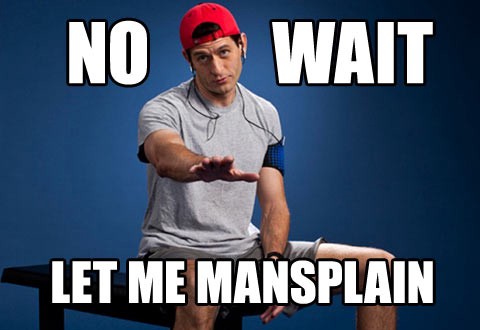 Here’s a post I’ve had saved for a while. A little too long, actually, as now I don’t recall exactly where I got this from. I know it was on Facebook, sometime last year. A woman posted this, to show what happened when she was attempting to sell a used iPhone. I don’t know where she posted that it’s for sale, the man in the below conversation refers to her appearance, so perhaps it was on Facebook or some other social media site, because it include her picture. Well, some man replied to the ad, and this is the text exchange that she had with him. I’ll inject my comments: 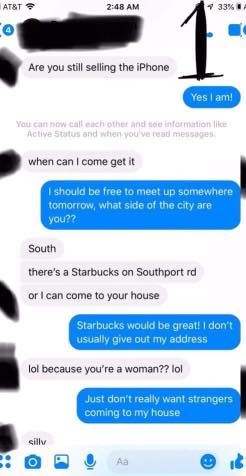 Note that he suggests Starbucks as the first option of where they could meet to make this sale. Like, on some level, he gets the idea that meeting in a neutral location to make this exchange is perfectly reasonable, it would seem. 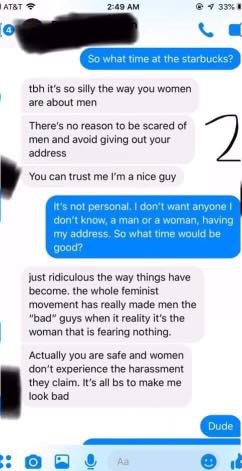 WTF?!? I could argue that right when he got to this point, she should just stopped talking to him blocked him. He doesn’t know this woman, he obstensibly just wants to buy a cheap used iphone, why does he need to get into an argument with this stranger about why she won’t give him her home address? Even if he thinks it is silly, and that she’s being unnecessarily cautious, SO WHAT? That’s her business and her life.

Two things that really stand out: “You can trust me. I’m a nice guy.”

Experience tells me that whenever a man explicitely refers to himself a “nice guy” he isn’t really that nice.

And then his rant about feminism with “women don’t experience the harassment they claim. It’s all bs to make me(n) look bad.”

And the condescension sets in, as he attempts to “educate” this women on the “reality” of what it’s like to be a woman. And he reiterates that he’s a “nice guy” (if you have to say it twice, then you definitely aren’t one)

This is a business transaction, what does her appearance have to do with anything?

He went from “let me come over and you’ll see I won’t rape you” (note that she never said anything about rape in the first place, or even men in particular, just that she didn’t like giving her address to strangers) to “I bet if I showed you the thick cock in my pants you’d change your mind and want to be raped” in a few sentences. And this is all meant to reassure her that he’s not dangerous! But that last sentence says it all. The reason he doesn’t think women really face harassment or rape as much as they “claim,” is because women who say they were raped are lying because they really wanted it. Jesus.

We’ve seen this before, haven’t we? If there’s one thing men like this hate, it’s being “ignored” by a woman.

Yeah, she really missed out.

I could post about the story or Ruth George, the 19 year old woman who was murdered last November by man who catcalled her on the street, or find many many other such examples to illustrate the very real danger that many women face in our society, but that’s really not even the point (and men like this will just site any such example as “rare exceptions” anyway). As I said, even if he thought she was overreacting, so what? Why did he suddenly act like it was his responsibility to show her the error of her ways? All he ended up doing is proving why she is right to be cautious but I doubt he’s self-aware enough to get that.

But the thing that really makes me sympathetic towards women, and understanding why they need to be cautious when encoutering strange men. I know a lot of men who react as if it’s personal, and get offended, like they believe that women should be able to tell that they are not dangerous like other men. But that’s the point, women can’t always tell. Dangerous men don’t always look or act dangerous, until it’s too late. I’ve posted this article before, which explains the problem perfectly: I HAVE BEEN RAPED BY FARE NICER MEN THAN YOU.

Or just think about this particular interaction. His escalation only turned to insults after she stated that she didn’t want to give out her home address. What if when he said “where can I come pick it up?” she just gave him her address? She would not have seen this dark side to him, but it’s there. He’s the type of man who says “go die whore” to a woman he doesn’t know. Likewise in the earlier post I linked to, what if “Em” had gotten and replied to his first message? She may have started talking to him and agreed to meet him, not knowing that he’s the type of guy who would call a woman names and wish violence upon her if he thinks she’s “ignoring” him.

And I have to wonder how many women are friends with or in relationships with, or ever married to, men who would do this? Men who would berate women, call them whores, and threaten to rape them, if they get angry, they just didn’t see that behavior themselves? How many men do they know who’ve sent unsolicited dick pics to women?  Every man you ask swears that he would never do these things, and many say that they never see it, yet almost every women has one or more stories of this sort of thing happening to them. So what does that say?