In January 1998, the same month that Rules of The Game #2 came out, Fighting American appeared in JUDGMENT DAY AFTERMATH, a comic-book that was meant to showcase some upcoming series’ that were spinning out of the Alan Moore-written JUDGMENT DAY miniseries, which I wrote about HERE. Although he doesn’t interact with the other heroes in this book, in 1997 an ad had been released which featured Fighting American as part of the superhero team THE ALLIES, which was one of the titles in previewed in the Aftermath title. But in the 2nd issue of Rob’s first Fighting American comic, Fighting American is asked to join but turns down membership in The Allies. Still, in late 1998 the series, featuring Fighting American as a member, was once again promoted as being due to start in April 1999, but that also never came to be.

But now along came legendary comic-book writer Jim Starlin (Rob did have a knack for getting talented creators on his books), who had been advertised as writing “Dogs of War”, which was said to be the opening arc of a new ongoing Fighting American series, but now this was instead being promoted as a standalone 4-issue miniseries.

Stephen Platt was the artist for this book, doing pencils and inks. Now SPLATT, as he was often credited, is a brilliant artist, I’ve always loved his work, since the moment he debuted in 1993 on Marvel’s Moon Knight series, before Rob snapped him up to draw his series Prophet. He’s incredibly detailed which also makes him incredibly slow. Even in all of the years since then, he’s never shown an ability to maintain a monthly comic-book series on schedule for an extended period of time, even with significant lead time to begin drawing, and this series was no exception. Even though this series was publicized 7 months earlier, I don’t know exactly when SPLATT started drawing this series, but after the first issue was published in September 1998, the second issue came out three months later in December 1998.

And then the third issue came out 5 months after that in May 1999.

For the record I have no inside knowledge of the behind the scenes actions involved in the creation of this miniseries, so yes it is entirely possible that Jim Starlin is the reason for these delays, he could have been late in completely and turning in the scripts for each issue. But…considering SPLATT’s track record up to the point and in the two decades since, I think it is safer to assume that he is the one responsible for the delays.

The curious thing about this series is that it was an almost complete 180 turn from the previous miniseries. So much so that when read back to back, the change is rather jarring. Gone is all the political satire and humor, this is a straight serious adventure with heavy emphasis on violence. No original Simon and Kirby supervillains appear in this tale. S.P.I.C.E., the android sidekick is also missing and not referenced. And the subplot of Kelly, John Flagg’s now-adult and super-powered apparent secret daughter, is also completely dropped. It’s possible that all of that was meant to be followed-up on in Rob Liefeld’s “Cold War” book, which was supposed to come out first, and that’s why Starlin ignored those plots. Or perhaps Starlin just didn’t want to deal with those plot points, and one thing Rob has always been good at is that is that when he hires others to work on “his” creations (although he was still only licensing Fighting American) he tends to let them have vast creative freedom to tell the types of stories that they want to tell.

The premise of this miniseries is that some rogue Russian general, now acting as a mercenary since the collapse of the Soviet Union, is peddling a top-secret Russian weapon to various terrorists across the world. The weapon is eventually discovered to be a special chemical bomb which is fatal to anyone with a certain degree of melanin in their skins. Meaning it kills non-White people and only non-White people. An American White Supremacist group is attempting to buy it, as part of their “Operation: Zero Tolerance” program, which is to kill all the non-White people in Texas an establish that state as an independent Homeland for White people. Fighting American has a running internal narration throughout the series, and it shows how conflicted he is with the modern world and the methods he is forced to adapt to do his job. I guess that’s the underlying theme of the series, how far must a hero go to defend freedom and democracy and still be a hero? And while his official mission is to capture the chemical weapon once he sees how it works, he’s uncomfortable with the idea of anyone possessing such a thing, even the U.S. government, and would rather just destroy it instead.

But the biggest twist of this series is that Fighting American finds himself working with a partner on this mission. A mysterious masked government against whose identity is kept secret, and he is only referred to as “No-Name.” No-Name appears to revel in the violence of this mission, he doesn’t hesitate to put a bullet in a bad guy’s head, which makes Fighting America wary about working with him. But he starts to suspect, and it is heavily implied to be true, that No-Name is actually SPEEDBOY, somehow survived from whatever it was that lead Fighting American to believe that he had been killed decades earlier.

Although the Speedboy costume seen here looks a lot more like Captain American’s original sidekick Bucky, just with the colors reversed, than like the original design for Speedboy. 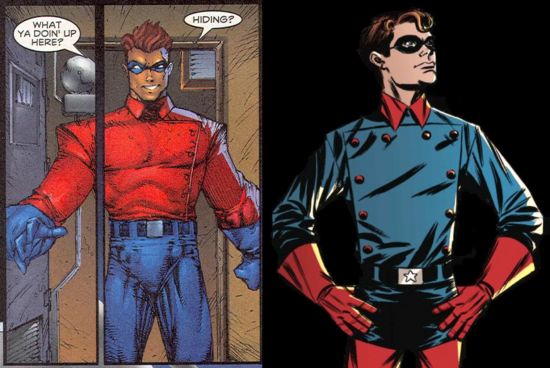 A connection I never made until I was re-reading this series in order to write this review, is that the idea of a Patriotic Superhero’s Innocent Teen Sidekick Who Was Believed Dead Returning In The Modern Day as A Violent Masked Assassin is…remarkably similar to what Ed Brubaker would do six years later at Marvel with Captain America’s sidekick Bucky becoming The Winter Soldier. . .but I’m sure that’s just a coincidence.

Following up on what Loeb revealed in Rules of The Game, we see in Dogs of War that Fighting American’s shield has various little missiles built into it that he can fire at others. And in the 2nd issue Fighting American and No-Name are introduced to another costumed character called The Scarlet Dragon, whom not much information is given accept that he’s Fighting American’s “counterpart in Red China”, he appears to have Fighting American “super soldier” abilities and even carries a shield. The Chinese government is also trying to stop the Russian weapon, and Dragon teams up with our heroes for the rest of the mission.

The biggest criticism I have about this book is that it is really indistinguishable from a Captain America story. So much so that I wouldn’t be surprised if, like with Rob’s first Fighting American story, this was an unused script for a Captain America miniseries that Starlin had written earlier and simply changed some of the names to make it a Fighting American miniseries, although I have been unable to find any interviews where Starlin ever spoke about this comic so I can’t confirm that. But Fighting American never appears out of costume nor is any attention given to his personal life, it’s just mostly non-stop action of a patriotic hero with a shield fighting terrorists. It’s entertaining enough for what it is, but it’s not particularly deep.

Now you may be wondering why I didn’t post the cover to the fourth and final issue above? That’s because it never came out.

Yes, sadly, like many other Rob Liefeld-published comics, Dogs of War would remain unfinished. This was simply the end. That was frustrating enough at the time, especially in those days before the internet, so all you could do was just keep checking the comic-book stores every week, hoping that a book you wanted was out.  Re-reading this series today I would still love to read a completed issue, just to get the full story, and I can marvel as SPLATT’s artwork here, without having to endure the huge breaks in-between issues. That fact that it’s incomplete makes it hard to fully recommend, but if you’re curious enough after reading this, you should be able to find some back issues relatively cheep in comic-book store quarter-bins.

Again, I’ve never read or seen Starlin or SPLATT speak of this series. Rob’s talked about it online, mentioning that his original published license for Fighting American eventually ran out and that Joe Simon wanted too much money to renew it, so Rob opted out. I assumed that that was why Dogs of War was never completed because SPLATT hadn’t finished the artwork for the 4th issue by the time the license expired. But looking up some other comics, that timeline doesn’t pan out. And Fighting America would appear in a couple of more comics that Awesome published.

First, in October 1999, SPLATT drew a one-shot for Marvel called Wolverine/Cable: Guts and Glory, written by Joe Casey. So sometime in those past 5 months SPLATT stopped drawing or stopped planning to draw Dogs of War #4 for some reason, and took on this job instead. It must be that it was during that time that he and Rob fell out.

Still, why didn’t Rob find some other artist to complete Dogs of War? It couldn’t have been a rights issue at that point, since In November 1999, Awesome Comics published SUPREME: THE RETURN #3, written by Alan Moore, which had Supreme traveling to the year 2150, and meeting “Fighting American IV.” 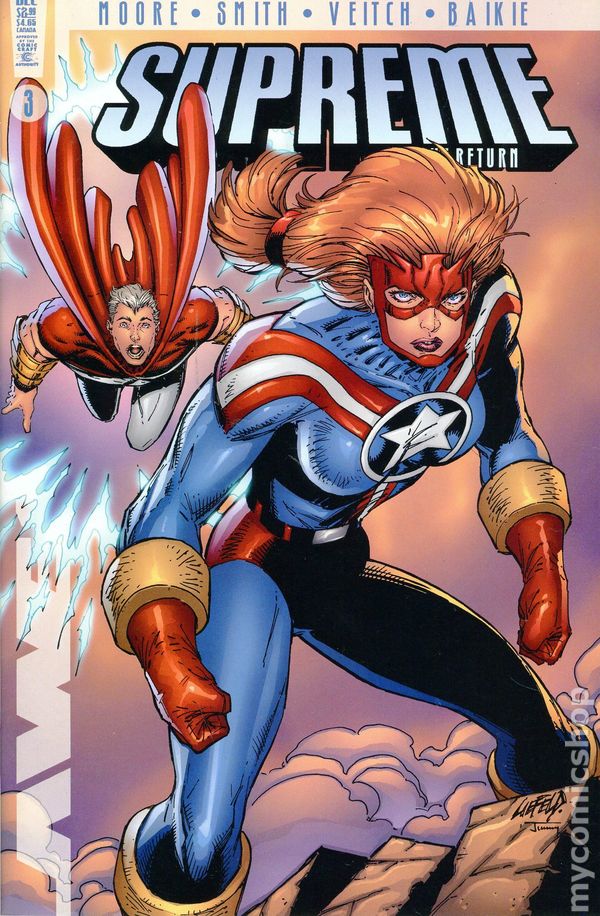 And then seven months later in July 2000, Awesome Comics the first issue of what was to be a new BRIGADE ongoing series, and Fighting American also appears in that issue, in which his android sidekick S.P.I.C.E. is framed for murder and joins with a bunch of teenager superheroes to prove her innocence. But no further issues of this series would be published either, and it appears that this is actually the last comic-book published by Awesome Comics, which would the shut down sometimes in early 2001, I believe.

So the exact details about the Rob’s licensing deal for Fighting American and how that came to an end, as well as what happened to all those aborted Fighting American projects, remains unclear at this time. But the bottom line is that Joe Simon and Jack Kirby’s creation was once again going into publishing limbo.