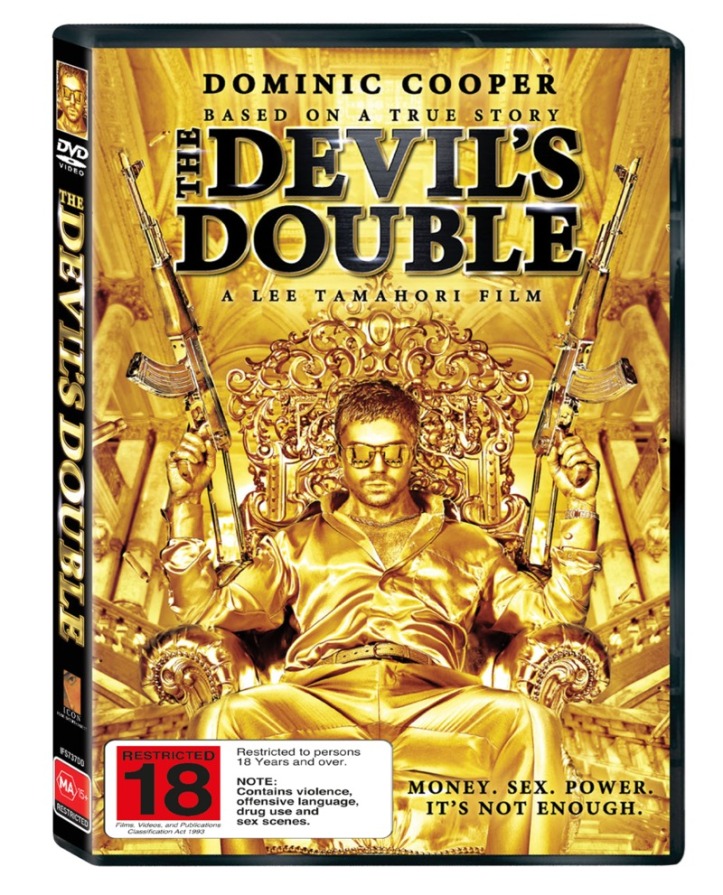 I just noticed that my old blog post reviewing the HBO miniseries HOUSE OF SADDAM got 2 new hits today, for some reason. Well, I’m all about maximizing my Search Engine Optimization, so I’ll add this review of The Devil’s Double.

This film is based on the true story of Latif Yahia, a man who claims that he used to be Uday Hussein’s body double. According to the film, Latif went to Elementary school with Uday and, as they grew older, bore a passing resemblance to each other. One day he is forcibly brought to Uday, and asked to become Uday’s official body-double. His job is to sometimes go out in public as Uday, because of the risks of assassination. Latif initially refuses, but he is imprisoned and beaten until he agrees, while his family is told that he died in the Iraq-Iran War. He is then forced to undergo plastic surgery in order to increase his similarity to Uday, and then moved into Uday’s mansion. For the next decade he witnesses first hand Uday’s madness. Uday drinks and does drugs. He’s irrational, and violent. He occasionally grabs teenage school girls off the streets and bribes them to have sex with him, and if they refuse he rapes them. Once, when Latif attempts to run off and visit his family, he is captured and Uday ties him up and whips him for punishment. AT a nightclub he forces all the other patrons, men and women, to strip naked and dance. He goes to a wedding and kidnaps the bride and rapes her. She then commits suicide by jumping out of a hotel window. There’s also the infamous incident where Uday brutally murders his father’s favorite bodyguard, shown in all the gory details. One day while out speaking to the army in Uday’s place, Latif survives an assassination attempt, but almost loses one of his fingers in the process. He also begins having an affair with a woman Sarrab, who is one of Uday’s mistresses, which is extremely dangerous for both of them.

The last straw for Latif is when Uday orders him to kill a man who came to Uday because Uday raped his daughter. Latif refuses, and when Uday threatens to kill him, Latif slits his own wrists, and then is returned to his family. After a later confrontation at a nightclub, where Uday tries to kill him, Latif and Sarrab escape to another country, but Sarrab betrays him in an attempt to protect her young daughter and sister, who are still in Iraq, and he is almost assassinated, while his father is killed by Uday. Eventually, Latif teams up with the husband of the man whose wife Uday raped, and they sneak back into Iraq and try to kill Uday, but fail, and Latif escapes again, and goes into hiding. After Uday’s death in 2003, Latif is revealed to be living in Ireland with his new wife.

This is a fascinating story, even with it’s clear exaggerations (I don’t believe that Latif had anything to do with that assassination attempt). The highest praise is given to Dominic Cooper, who plays both Uday and Latif. His job is very difficult, as he has to not play too different people at the same time, but play one man pretending to be another, while also playing the real other man. And he pulls it off wonderfully. When he plays both Uday and Latif together in the same scene you can’t even tell that they’re the same man. Also kudos to the director, Lee Tamahori, for his skill in shooting those scenes. And actress Ludivine Sagnier is extremely seductive as Sarrab, she makes you believe a man would risk his life just to sleep with her.

Great companion film to House of Saddam, but also stands on its own.

The Devil’s Double can be bought on Amazon.