SUPERMAN, the first and greatest superhero of all time. I’ve been a fan my entire life, and have read thousands of Superman comics. Here is my top 5:

5/SUPERMAN VS. THE AMAZING SPIDER-MAN 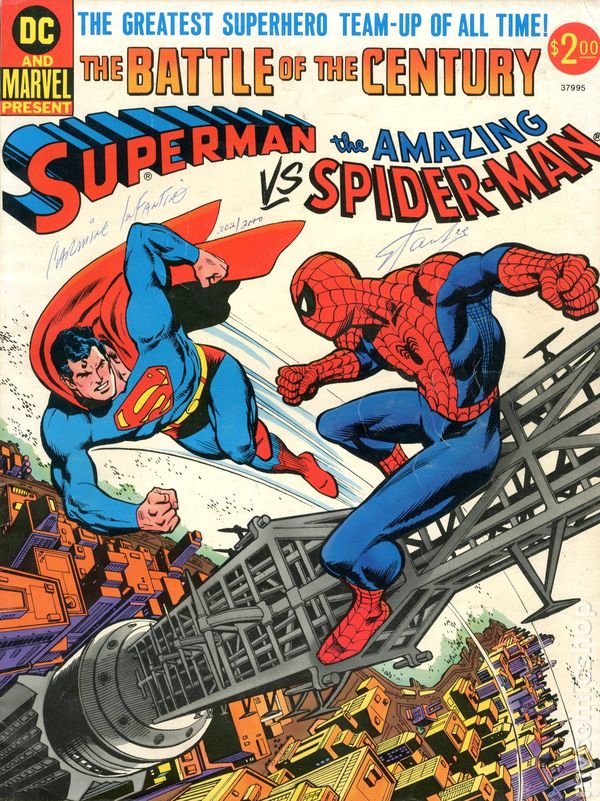 Written by Gerry Conway & drawn by Ross Andru (with some help from Neal Adams and John Romita Sr.), released in 1976, this was the 1st official crossover comic between DC Comics and Marvel Comics. There have been many crossovers in the decades since then, some better written and drawn than this one (such as John Byrne’s Batman/Captain America and, of course, the massive Justice League/Avengers miniseries by Kurt Busiek & George Perez), but this is special because it’s “the first.”

I like that this story portrays it as if Superman and Spider-Man have always existed in the same world, they’ve just never met before, instead of other crossovers (such as the aforementioned JLA/Avengers) which involved parallel worlds and crossing dimensions. This story starts simple enough, Superman stops Lex Luthor’s latest scheme while Spider-Man stops Doctor Octopus, and then both villains happen to be sent to the same prison, where they decide to team up to destroy each others arch-enemies, which is how Superman and Spider-Man initially come into conflict, before the two heroes figure out what’s going on and then join together. I won’t spoil the story, but it ends with Clark Kent and Lois Lane going off on a double-date with Peter Parker and Mary Jane, which just seems fitting.

There was a follow-up a few years later, where the two heroes team-up again, this time to fight a scheme by Dr. Doom and The Parasite, which also features guest-appearances by Wonder Woman and The Hulk (whom I hear were just included because they both had TV shows on at the time), and it was a decent book but just somehow not as good in my opinion. Original copies of both books can be hard to come by, but they were included in a trade-paperback (along with Batman/Hulk and Teen Titans/X-Men): The Marvel/DC Collection: Crossover Classics Vol. 1

4/ACTION COMICS #775 “What’s So Funny About Truth, Justice, and The American Way?”

I’m not a fan of the artwork in this comic, by Doug Mahnke and Lee Bermejo, but I can overlook it due to the great story, by Joe Kelly. Basically, Kelly uses this story to address all the complaints that many fans make about the character of Superman, that he’s too boring, and too powerful to be interesting, and that his code to never kill is out-dated, making him a “Big Blue Boyscout.”

A new, extremely powerful super-hero team, calling themselves The Elite, appear on Earth and start dishing out their own brand of justice, which includes killing their enemies. As the public tide turns against heroes like Superman, in favor of the more aggressive Elite, Superman is forced into a confrontation with them, to prove that his way of working is correct.

I think this was great as a one-off story. DC Comics brought the characters back several times, even giving them their own short-lived series as a spin-off of the Justice League, but I think that diluted the effectiveness of the characters. I prefer to remember just this one first issue. The initial story is included in Superman: The Greatest Stories Ever Told, Vol. 1, and it inspired an animated movie, which I have not seen yet. 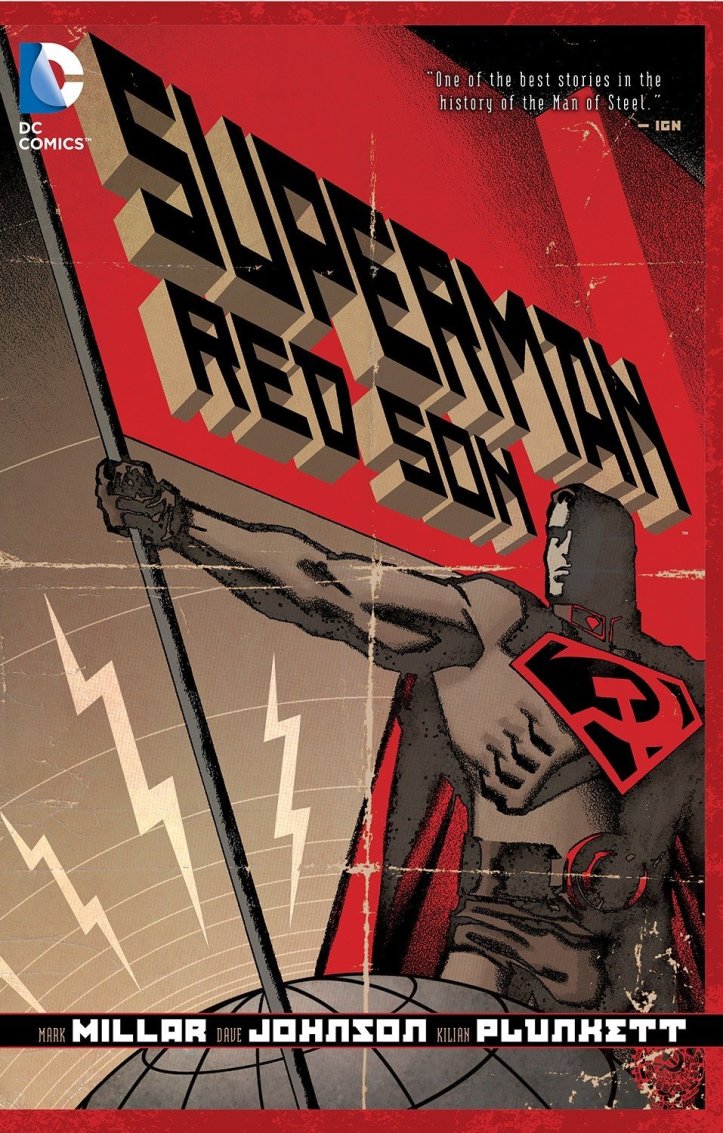 Another book where I’m not crazy about the art (by Dave Johnson & Kilian Plunkett) but the story by Mark Millar is masterful. Set in an “alternate reality” where Superman is sent to Earth as a baby but his rocket ship lands in the Soviet Union in the 1930’s and he grows up to become a servant of Joseph Stalin and then eventually the leader of the USSR himself, the story shows how history progresses. Many of the classic supporting cast is here. Lex Luthor is a brilliant American scientist, working for the CIA to come up with weapons to fight Superman, and Lois Lane is his wife. Jimmy Olson is a CIA agent who eventually becomes Vice President when Lex is elected President. Brainiac is an alien originally allied with Luthor to stop Superman, until Superman takes control of it, and uses it to help enforce order in the USSR and abroad. Wonder Woman is there, as the Amazons initially ally themselves with the Soviets. Batman was a young Russian boy whose parents were killed by the Soviet police, and now he’s dedicated his life to trying to find a way to stop Superman, and Green Lantern leads a group of U.S. Marines all armed with power-rings.

This book, which was originally a 3-part miniseries, now collected as one, is chock full various “Easter eggs” alluding to other comic-book characters and real historical figures and events (JFK gets elected President and in his 2nd term he divorces Jackie and marries Marilyn Monroe). This is just a really fascinating series that could have easily been more stereotypical, with Superman as a big evil soviet dictator, but it’s got more nuance than that, and it’s not so Black and White, with both Superman and Lex doing “bad” things for what they believe to be good reasons. I’m not surprised that Henry Cavill has praised this series as one of the books he’s studied to prepare to play Superman onscreen. 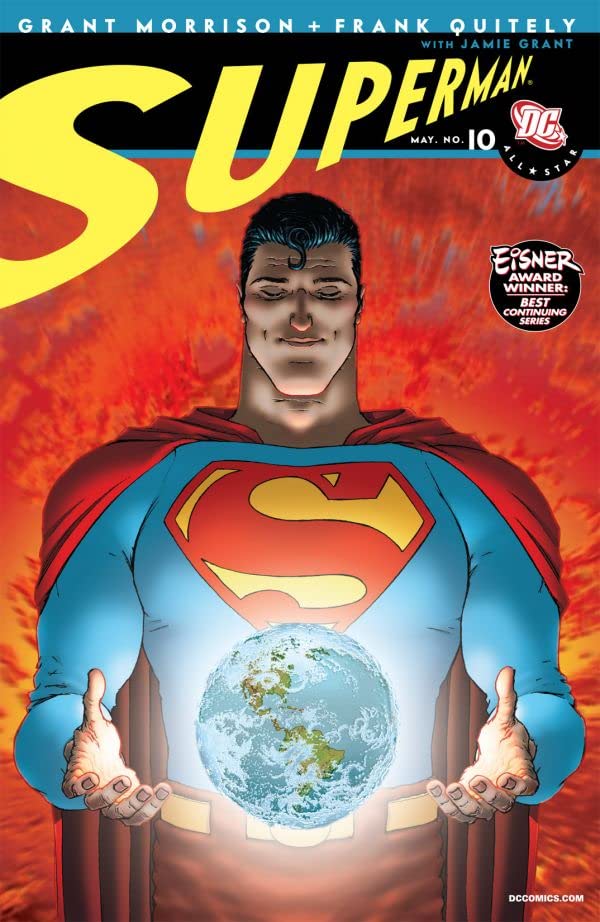 This was a 12-part series that I bought 3 times in different formats because I love it so much. First I bought each issue as they were released (often with long delays in between). Then I bought the two trade paperbacks collecting all 12 issues when it was over. And last week I bought the over-sized special hardcover edition.

Written by Grant Morrison and drawn by Frank Quietly, Superman discovers that, thanks to an evil scheme by Lex Luthor, he is dying and has about a year left to live. Then time travelers from the future reveal that he must complete 12 special tasks before he dies, and this series is about that last year of Superman’s life. I don’t want to say anything for fear of spoiling it, but this series really is the ultimate “love letter” to the character. It’s Grant Morrison at his creative best.

The particular standout is issue #10 (the cover of which is the image I’ve posted), where Superman creates his own “pocket universe” with a parallel Earth in it, because he wants to see how history would unfold in a world where he never existed. Great stuff.

There was also an animated movie but, in my opinion, it just wasn’t that good. But I think that’s a fault of the format, if you were to faithfully adapt this series it needed to be a long miniseries, not a 90-minute film because too much had to be cut out.

I first read this book as a little kid and I liked it, but I didn’t really know who Muhammad Ali was at the time, so it was just a cool Superman story to me. Years later, as an adult, I came to consider Ali my personal role model, and have read several books about his life, and then I realized how significant this book was. It was out of print, so I tracked it down on ebay, the very first item I ever bought online, which I had been reluctant to do, and found a beat-up old copy for $28. I didn’t care if the copy was “mint” I just wanted to story. Then a few years ago DC finally reprinted it in a special edition, which I also bought.

The plot is pretty bare. Clark, Lois, and Jimmy and go to interview Muhammad Ali and in the middle of it some aliens land on Earth and demand that Superman fight their greatest champion and if he loses, they’re taking over Earth. Superman is ready to accept, but Ali interrupts and insists that he should be the one to fight the alien champion, since he’s from Earth and is therefor their “greatest champion” and not Superman, who is from Krypton. So the aliens insist that Ali and Superman fight first (on another planet, with a red sun, so that Ali and Superman are both equal), and then the winner will face the alien champion.

I know, on the surface, it sounds like a pretty silly story, and it could have easily been that. But the creators involved (writer Denny O’Neil and artist Neal Adams) managed to craft a compelling story out of this, that doesn’t feel contrived at all, even with Ali’s involvement. But, as I said, I didn’t really know him when I first read it, but he fit in perfectly, Muhammad Ali could have easily been another fictional character in the DC Comics universe, and this story would still have worked perfectly. I highly recommend this book.