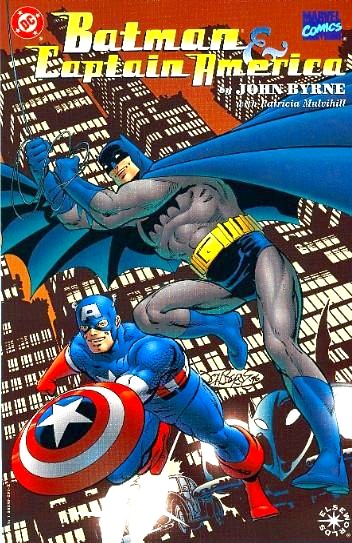 Published in 1996 by DC Comics, with permission from Marvel Comics, this is one of my all-time favorite superhero crossover stories. It opens in January 1945 in Gotham City, with Batman and Robin on hot pursuit of The Joker (he escapes). Next we cut to a battlefield in Europe, where we witness Captain America fighting alongside Sgt. Rock and Easy Company against a giant Nazi war machine (Cap disables it). Then Cap is given a telegram sending him and Bucky back to the states, there he’s sent to Gotham City for a top secret mission.

I want to keep spoilers to a minimum here, so I won’t say too much more. This mission involves the development of the atomic bomb, which in this continuity is happening in Gotham City (it’s called “The Gotham Project” instead of The Manhattan Project). Cap and Bucky make a daring airplane rescue in midair, which leads to Cap meeting Batman as they save Robert Oppenheimer from kidnappers and then try to uncover a plot to steal the bomb itself.

For those who wonder about such things, I’ll just say that yes, there is a brief fight between the two heroes, although it’s not exactly Batman vs. Captain America, it’s Bruce Wayne vs. Steve Rogers (when you read it, it will make sense) and it basically ends in a draw (although Bruce concedes that Steve has a slight advantage).

The two duos switch partners and split up at one point, with Robin taking Captain America with him to answer Commissioner Gordon’s Bat-Signal, while Batman and Bucky head off in the Batmobile to track down a different lead (& end up in a good old fashioned death trap). The villains behind this scheme turn out to be The Joker and The Red Skull. Although the Joker was unaware of whom his partner was, and was none too happy when he found out…

I love that exchange. You tell him, Joker!

Of course that’s not the end. The Red Skull gets his hands on the bomb and activates it, planning to destroy Gotham City and bring America to it’s knees in the process. Batman and Captain America must race against the clock to stop him in time and save the day…and you should read this to find out how this ends.

Such a great book, I will give John Byrne credit where credit is due, I’ve always preferred that in crossovers like this it is written as if the characters just always existed in the same universe, instead of doing some big cosmic crossover thing (although that also works), and that’s what this does and Byrne makes it feel completely natural that these characters coexist (it’s published under DC’s “Elseworlds” label). He knew how to write the characters (this Batman is the smiling “caped crusader” version, not the brooding “dark knight”) and play to each of their strengths in this book. Neither character is short-changed in any way. Bucky’s arrogance towards Robin (Bucky thinks he has the better partner and more exciting adventures) is funny, as are The Joker and Red Skull when they interact. And there’s also an extremely clever epilogue to this story, which Byrne credits to Roger Stern for giving him the idea. I definitely won’t spoil that one. I highly recommend this book.

Unfortunately it’s out of print, and not available digitally, so print copies of the single issue can be found on Amazon for a hefty price. This story is also featured in DC/Marvel Crossover Classics, Vol. II 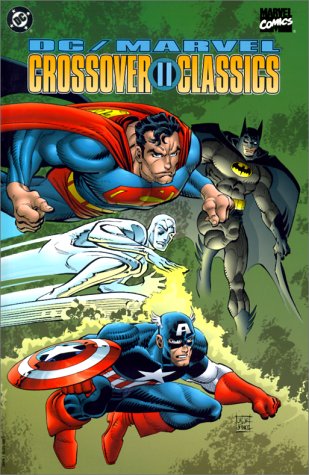