THE ONE WHERE I TRY TO DEFEND TYLER PERRY (AND OPRAH) 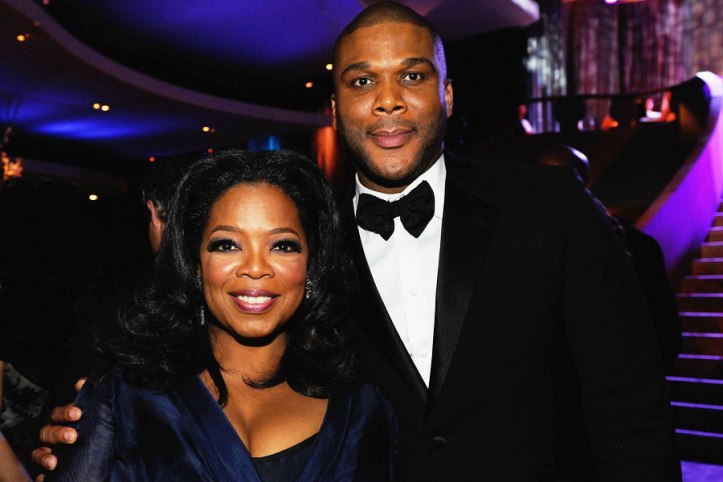 The, I think 4th and 5th episodes of Tyler Perry’s new soap opera, The Haves And The Have Nots, which debuted on the Oprah Winfrey Network last month, come on tonight. I’m not planning on watching it, I’d watched the first two episodes, not because I am a Tyler Perry fan (I’m not), but because, as I said before, I am a soap opera fan, so I was curious (and there wasn’t anything better on TV @ the time, anyway). Judging it as a soap opera fan, I have to honestly say that I thought it was okay. Nothing spectacular, but nothing horrible either. It didn’t feel like a “Tyler Perry” show to me, it didn’t have the tropes I expected from him. There was no obese old Black woman shouting at everyone, and nobody went to church or gave a speech about Jesus, so that was a pleasant surprise. Despite airing at night, it is clearly modeled after daytime soaps, and based on those two initial episodes, I think it has potential. Not quite enough to hook me to continue watching, though. But I wish him well with it. And early reports say it has been successful for him and the network.

As I said, I’m not a Tyler Perry fan. I have never seen any of his movies, nor really wanted to. When I first saw the trailer for his last film, Temptation, I did think it looked alright, and was slightly interested (despite the involvement of Kim Kardashian, whom I LOATH), but as I read some reviews, particularly THIS ONE, I changed my mind. No thanks. And I have only watched one of his TV shows before this. Years ago, I sat through a 2-part episode of HOUSE OF PAYNE, which aired back to back, and it was one of the most non-funny sitcoms I’ve ever seen. It wasn’t offensive to me, it just wasn’t funny. And that’s been the main reason I’ve also skipped his movies, particularly his movies that prominently feature the Madea character.

I just don’t get the appeal of that. I mean, I get the base humor of it, it’s a man in a dress. When you put a man in a dress, and he pretends to be a woman, while still clearly looking like a man, there’s a visceral reaction for many. It’s nothing new, Milton Berle was doing it 50 years ago. But to me that’s just cheap humor, it’s not my thing. It’s like toilet humor, someone farts in a movie and that’s supposed to be hilarious, but I don’t think so. So you put a man in a dress, and we’re supposed to laugh. Bonus points if he’s always wearing a fat suit under the dress. While I liked The Nutty Professor, I never saw Nutty Professor 2. I skipped all the Big Mama’s House Films, and Norbit, and White Chicks. And I was never a fan of the old Martin Lawrence sitcom, where he’d dress up as “Sheneneh” (although I will admit that I used to think that Jamie Foxx was funny when he’d do “Wanda” on In Living Color). So, fairly or not, seeing Madea on the screen was just an automatic turn-off. And as for his dramas, aside from the aforementioned Temptations (&, now that I think about it, I kinda wanted to see The Family That Preys, but just never got around to it), I just didn’t have any interest. They simply looked boring to me. So I passed.

But the thing is, I never believed in trashing the man, like so many Black critics seem to love doing. I’ve always thought the hate that’s been directed his way was overboard. Personally, I can’t help but admire the man. I have many Black friends, in real life and online, who happen to be involved, or are trying to be involved, in some aspect of the entertainment industry. And, basically, Tyler Perry has done and is doing exactly what these Black folks keep saying that “we” need to be doing. Instead of sitting around waiting for the Hollywood Powers That Be to recognize us, and tell our stories, he took control of his own destiny, invested in myself to tell the stories that HE wants to tell, and spent years cultivating an audience that wanted to see his stories And it wasn’t easy for him. His very first play bombed, he lost all his money on it, and ended up living in his car for a while, but he never gave up. And when he finally hit it big, he invested in himself again, and built his own studio. So now he doesn’t have to sit around waiting for some big studio executive to greenlight his films, he just makes them himself! That’s extremely smart! I saw behind the scenes of his studio, there’s a sea of Black faces working behind the camera, as well as in front of it. The man is talking the talk and walking the walk!

And what does he get for his efforts? An online petition to get him off TV. And Spike Lee, calling his work “coonery, buffoonery”. First, Spike should be a little more concerned with his own films, rather than Perry’s. I have seen most of Lee’s work and, in my opinion, he hasn’t made a halfway decent film since The 25th Hour. And the man who made “Girl 6” shouldn’t be calling anyone a coon. But, second, if Spike had a problem with Perry’s work, why couldn’t he contact him personally, and talk directly to him in private? Why did he go public like that (just like he’s done to other successful Blacks, like Eddie Murphy, Whoopie Goldberg, and Oprah)? Maybe if he’d offer Perry some constructive criticism, Perry would take it, and maybe they could even collaborate on something, the way White filmmakers like Stephen Spielberg and George Lucas have done, instead of just another Black on Black public feud.

And that’s why I am happy about Perry and Oprah, another success story who built herself up from nothing, collaborating. Two successful Blacks in entertainment working together instead of competing? How awesome is that? This deal is actually pretty historic. A Black man who owns his own film studio, signing a major deal with a Black woman who owns her own Television Network? This should be a cause for celebration in the Black community. But all so many of “us” can do is complain. Like this review of The Have And The Have-Nots:

In under 15 minutes of episode one there were three Black women: Hanna, a maid, who speaks like she just left the plantation; Veronica, a rich black lady bitch, who throws her coat and hat at the maid; and Candace, the maid’s daughter, a scheming, conniving prostitute who tells people the mom is dead, later can be seen raising her hand to her mom, has her own son who is God knows where, is allegedly in law school, but paying for it by questionable means, and ultimately by the closing scene of episode two can be seen raping the white patriarch/politician.

The fact that Mammy, Jezebel, and Sapphire, along with their remixes (Bad) Baby Mama, Golddigger, Freak and Hood Bitch showed up in under 15 mins is surely a new world record.

This “reviewer” clearly has an agenda, beyond being fair and balanced. All of these things she calls racial stereotypes? Those are just standard soap opera tropes. Especially the seductive female antagonist who will use anything, including sex, to get what she wants? Hello?!? ERIKA KANE? ALEXIS CARRINGTON? And way too many others to name?!? But when it’s a Black woman (the sexy DARK-SKINNED Tika Sumpter), now it’s the “Jezebel?” Please. It’s a soap opera. The very nature of the genre should tell you what kinds of characters to expect. You can’t make a soap opera where all the characters are fine upstanding citizens, like the Huxtables, damn.

Some folks have also brought up the issue of Perry’s treatment of his writers, with some contract disputes that went on a couple of years ago, which seemed to have been resolved. I don’t know all the details of that, or how unions in Hollywood work, but he’s far from the first studio to go through things like this. I think that’s just a convenient excuse for some critics to attack him. The truth is they just don’t like his films. And I say if any writers don’t think they’re getting paid what they deserve from Perry, then they don’t have to work for him. Go work at another studio. Of course, the problem is, most others studio don’t exactly go out of their way to hire Black writers, which is something that I don’t believe Perry gets enough credit for.

But, to me, the bottom line is that he’s shown what can be accomplished. Instead of just attacking him for his content, I wish more Blacks in Hollywood were studying his methods, seeing how he got to where he is today, through his slow but steady build-up of his audience, and following suit. If YOU think he’s so bad, then prove it by doing what he did and doing it better.

Do I wish Tyler Perry was making different types of movies and TV shows? The kind that I want to see? Like Space Operas and Sword and Sorcery epics, like Stars War or Lord of The Rings, except with multicultural characters? Or a Black superhero movie that’s not a joke, like Hancock? Absolutely. But I can’t fault him for that. He’s doing his thing, so let the people who enjoy that, enjoy it, without jumping all on them. Don’t be hatin’.