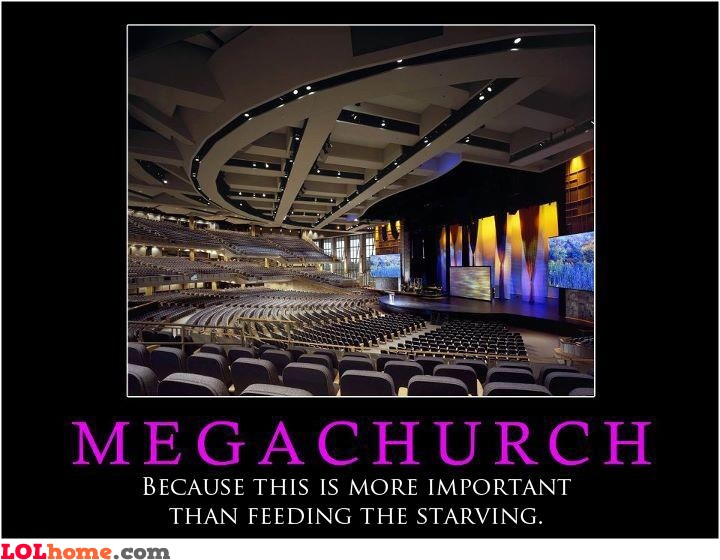 Joel Osteen’s church theft opens can of worms: Jaws drop as folks do the math

Joel Osteen recently reported the theft of $600,000 from the safe in his church, but the theft wasn’t the only information of interest revealed. After finding out that this large chunk of money was from just one weekend of Osteen’s collected church donations, jaws dropped around the nation. According to News Max on March 18, it didn’t take long for folks on the outside to do the math. Based on Osteen’s reported amount of money in this theft, it appears his Lakewood Church takes in $32 million a year. Calculator keys were punched around the nation taking the $600,000 for Olsteen’s weekend donation collection and timing this by the 52 weeks in a year.
READ MORE

The above story has popped up several times in my Facebook news stream this weekend, as several friends have shared it.

OMG, look at how much money he’s making!

I’ve seen this topic brought up before about preachers like Osteen and T.D. Jakes and others who run so-called Megachurches. The implication, or downright accusation, is that preachers and churches like this are obviously more about making money and getting famous than being truly about helping people. That amassing material wealth is somehow “un-Christ-like”, and proof of greed.

Now, I’m not some big defender of any particular preacher or religious group, I don’t know enough about Osteen or Jakes to make a definitive judgment about them or what they do. I’m just playing devils advocate here, so to speak (no pun intended).

First, there seems to be this idea that a Megachurch is inherently bad. But why is it? Isn’t the purpose of a church for people to gather and worship and celebrate Jesus Christ? So if a particular church happens to be really good at that, people love the pastor/reverend/priest who preaches there, they want to hear him or her speak, and if more and more people want to go there, until it gets to the point that they don’t have enough room, what do they do?

They expand to a bigger location! And if that’s still not enough room then they expand some more. And they get as big as they need to fit everyone who wants to come. What’s wrong with that?

And that applies to any other religious group, if you’re a Rabbi and you’ve got 3000 Jews in your area who want to attend your services, then I’d guess you’d need a really big synagog. Or if you’re an Islamic Imam with 3000 Muslims then you need a big Mosque. Okay, so? It’s the law of supply and demand. I don’t see why some people act like having a large building somehow automatically makes the church less sincere?

And as for the individual preachers, this is something else I’ve often wondered about. Admittedly I’m no Biblical scholar. But do you have to be flat broke in order to be a sincere Christian preacher?

Maybe this is just the ardent Capitalist in me speaking, but doesn’t everyone have the right to earn a living and to enjoy themselves? Obviously, I don’t mean the complete charlatans who take all the money their congregation donates and spends it on fancy jewelry or luxury cars. But if you are doing good works, can’t you also spend some on yourself?

I remember a TV news investigation about some other pastor with a megachurch, the name escapes me right now, but they were pointing out the fact when this pastor and his staff went to some 3RD World Country on a Missionary mission, the staff stayed in some 4-star hotel. And, again, I was thinking, so what’s wrong with that? They need a place to sleep, right? So if they are in fact doing the Missionary work that they said they were going to do when they went to this place during the day, why can’t they go to a nice hotel at night to sleep?

There’s also the criticism that pastors like Olsteen and Jakes get for selling their books and CD’s. People jump to call this a money-scheme too, but that also feels like a double-standard. If it’s okay for someone like Lil Wayne to sell CD’s full of filthy rap songs with explicit lyrics, and make millions of dollars, then why can’t a preacher sell CD’s full of his gospel sermons and make millions of dollars? They’re both getting rich, but at least the preacher is getting rich by selling a positive message, trying to make people’s lives better. Same with books that they write and sell. I don’t necessarily see the problem with that. And if they use some of the profits from those CD’s and books and other merchandise they sell to buy a nice house, then so be it.

I mean, to look at this another way, we live in a society that worships wealth. From the various Real Housewives shows to The Kardashians, we love to watch celebrities flaunt their wealth. If it’s okay for Kim Kardashian, who’s basically accomplished nothing of any importance to anyone, to live in a mansion, then why can’t Joel Osteen live in a mansion? At least he’s trying to do something good for people.

I know it’s not that simple. Again, I can’t specifically speak to the character of these people, Osteen and Jakes could both be total frauds for all I know, I’m just saying that I don’t see why Spreading The Gospel and Making Money have to be mutually exclusive.