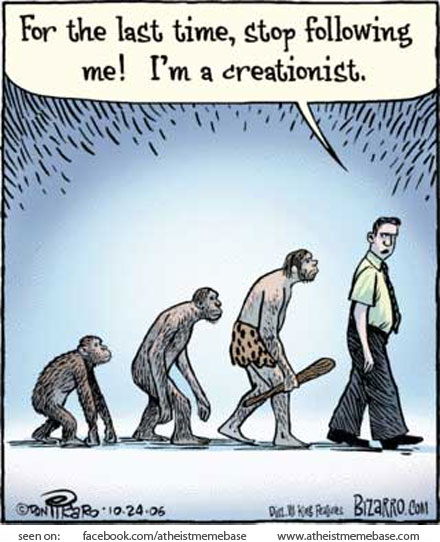 That’s right, I’m casting societal conventions aside and discussing the topic of RELIGION today. Let’s see if I can do that without angering somebody.

Last night I saw that one of my conservative Christian friends (yes, I have a few of them) posted some video on her Facebook page that had some man in it, and the headline was something like “Hey Atheists, watch me debunk evolution in three minutes”. I didn’t bother actually watching the video, I’ve seen a few of that type before. I’ve also witnessed many heated debates on friend’s pages between believers (usually Christians, but also a few Muslims) and atheists and agnostics about evolution, with the believers insisting that evolution is “just a theory”, and trying to poke holes in it, to prove it’s not true. Of course the atheists are equally insistent that it is true. But the real point of these debates isn’t any type of scientific enlightenment, it’s that each side thinks that if they can prove or disprove evolution then it proves their belief system or lack of one is correct.

First of all, there really isn’t any conflict between evolution and religion, they do go together pretty easily. The theory (& in scientific terms, “theory” pretty much means observable fact, something believers often misunderstand) of evolution does not, and cannot, disprove the existence of a Supreme Being/God/Deity/Creator/Intelligent Designer. You can be religious and a believer in science. Dr. Ben Carson is one of the most brilliant brain surgeons in the world, and he’s a devout Christian. It’s not incompatible. And I should know. For the record, while I may be a confirmed Godless Heathen now, I have been religious in the past. I was raised and baptized Catholic, then as an adult I converted to Islam for about 5 years, and then converted to the Baha’i Faith for about 2 years, before realizing that religion just isn’t for me. But even as a kid I was interested in Science, and never saw the conflict between the science lessons I was taught in public school and the biblical lessons I was taught in Sunday school.

The only thing science does is disprove a strict literal interpretation of the creation of life, the universe, and everything as outlined in Genesis. The whole 6 days (and each day was 24 hours long, like now) where God just make this, make that, let there be light, etc. and on the 7th day he was done, and the world was pretty much finished, looking as it does now, and that was a few thousand years ago. Okay, that’s not true, but I didn’t think most believers really take the story that literally anymore, do they? And, with all do respect, the Bible is chock full of contradictions and things left unexplained in it already, so you already have to do some mental stretches to make it work. Carbon-dating tells us the world is billions of years old, and we have uncovered fossils of dinosaurs that were here long before us. But so what, just because the Bible doesn’t specifically mention dinosaurs, doesn’t mean that the existence of dinosaurs disproves the Bible as the word of God.

As a kid I always just figured that evolution was simply the explanation for how God created everything. Billions of years ago there was nothing, until God created a “Big Bang” which started the universe, eventually leading to the formation of Earth, and over the course of billions of years he created life, beginning in the primordial oceans, guiding evolution from microbes to the different species of cavemen, and finally into US. There you go. That’s how we got here. Heck, you could argue that the complexity of evolution and all of the other environmental changes which allowed it to happen, is further proof of “intelligent design.” Because everything worked out pretty well, didn’t it? Good thing humans don’t have three arms, or breath through gills on our necks. Maybe that was part of His plan? Hmmm? I don’t know. But that’s the point, I can’t prove it all happened by random chance, or if it was part of some divine guidance. Nobody can. So if you believe in a higher power, then you just have faith that that’s why it worked. And if you don’t believe in that, then just go on with your life, too.

The same goes for other scientific advances. We have many documented cases of people who have died and the come back to life, just like what was described in the Bible and other religious texts. Doctors can explain the medical reasons why some dead people have been able to be revived, but a believer can still consider the reasons to be part of God’s plan. There are people who have had visions, and out of body experiences during their brief deaths, claiming to have seen the White Light at the end of the tunnel, or seeing dead loved ones. Science claims it can be explained as various synapses in the brain or whatever, but you can’t prove that’s not really some kind of message from God or journey to the afterlife.

So just stop the pointless arguing, okay? You either have faith or you don’t. But you’re never going to talk somebody into believing or disbelieving in any religion, that’s not how it works. Especially not on Facebook or Twitter. Leave the religious debates off the internet, and use social media for what it’s for: posting funny pictures of cats.