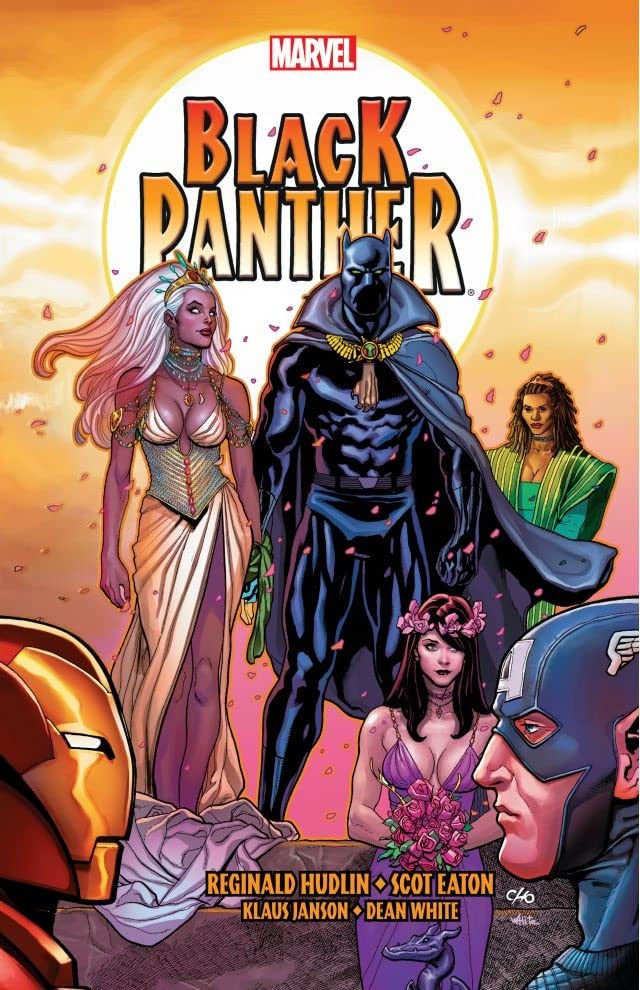 This is the storyline that detailed the proposal, engagement, and marriage of Black Panther and Storm. I have to be honest, when I first heard about these intended nuptials, I was not all that enthusiastic about it. I thought (& still do) that BP getting married to a woman like Storm would change the dynamic of the character and the types of stories that can you tell with him too much. Black Panther’s typical threats would be no match for Storm. I always compared it to what if Batman married Wonder Woman, and she moved into Wayne Manor with him? Well now Batman’s arch-enemies, the Joker, The Riddler, The Penguin, etc. would be no match for her. She could even snap Bane in half. So now does Batman do? So I would think back to stories like the opening arc of this series, and think about how if Storm had been there should could have just whipped up a tornado and taken care of Klaw, Black Knight, Rhino, and the rest of them with a snap of her fingers. And that wouldn’t exactly be a thrilling story to read, would it? So I was doubtful as to how this could work, fearing that either BP would become a supporting character in his own title or that Storm would have to be written as weaker than she really is to keep her from overshadowing BP. But I tried to keep an open mind while reading the series.

Black Panther #14
This issue is the build-up to the meeting. First T’Challa is giving Luke Cage a ride back to Luke’s home, after their adventures in Asia and Louisiana. Through flashbacks we get some background of not only T’Challa but Wakanda’s history, including the time that Malcolm X visited Wakanda, and his connection to Storm’s father. We also see young T’Challa have a heart to heart conversation about love with his father, who was clearly a wise and noble man. And then T’Challa finds Storm who is in Africa, fighting Arab slave-traders. Wolverine is also there, but makes a quick get-away when T’Challa arrives, and after an intense conversation, T’Challa proposes. Many “fans” complained about the lack of published history between the two characters, but the way Hudlin fills in the blanks here, and from the strength of the dialog between T’Challa and Storm, it all rang true to me. Good job there.

Black Panther #15
Before Storm can answer, they’re attacked by a supervillain called The Arabian Knight. But he’s not much of a real threat, and T’Challa and Storm fight him off together, all the while still arguing about their past, in a very funny and cleverly written scene. Storm agrees to accompany T’Challa to Wakanda, where she meets his mother who likes her immediately. And then finally, in the end, Storm says yes.

Black Panther #16
This is where the public announcement is made, and we get see the reactions from across the globe. Some local Wakandans aren’t happy, others think it’s romantic. Various heroes, including the X-Men, Avengers, and Fantastic Four, react differently, while SHIELD prepares for the international security implications of the wedding. The highlight is T’Challa tracking down Storm’s long-lost Paternal grandparents, a couple of tough old Black militants, and reuniting them with Storm. And a couple of T’Challa’s old enemies appear, including…MAN-APE!

Black Panther #17
T’Challa, somewhat reluctantly, agrees to have a bachelor party, arranged by Luke Cage. Along with Wolverine, Ben Grimm, Namor, Falcon, and T’Challa’s cousin T’Shan fly off to a strip club, while Storm goes out with Kitty Pryde and Sue Storm. Let’s just say that neither event goes as planned…

Black Panther #18
And this is it. The big event. A double-sized issue mostly focusing on the wedding ceremony and celebration. Tons of cameos, from George Bush to The Watcher to, yes, the Man-Ape. This comic took place just as Marvel’s line-wide Civil War event was gearing up. Wakanda is declared neutral territory for the day, so pro and anti-registration superheroes both attend, including Iron Man and Captain America, although neither stays for the ceremony, despite T’Challa’s attempt at peacemaking. The highlight includes the actual wedding ceremony, especially when Storm makes her grand entrance. And then when she and T’Challa ascend to the spirit world to meet The Panther God, who judges Storm worthy. And afterwards, Storm and T’Challa are alone opening their gifts, including a special message from Doctor Doom…

Re-reading this arc again after all these years, I can definitely appreciate it a little more than I did when it was first published. Again, for all the talk of this relationship being “rushed,” it doesn’t feel like that at all when reading this story. The best moments are the scenes when T’Challa and Storm are alone, they talk like you’d expect a couple with a long and complex history together would talk to each other. But Hudlin does just as well when writing the interactions between various super-heroes. In particular I appreciate how in the showdown between Captain America and Iron Man neither one is made to look “right” or “wrong,” it’s clear that each believes he is doing the heroic thing, so it’s left to the readers to decide whom they agree with.

Scot Easton’s artwork also seems to improve with each issue, as he gets more comfortable with the characters. He occasionally has a tendency to use real-life celebrities as likenesses for random background characters, which is interesting when you spot it. All in all, this story is a pretty good package.

You can get the individual issues of this arc via Comixology, or just get the collected edition: