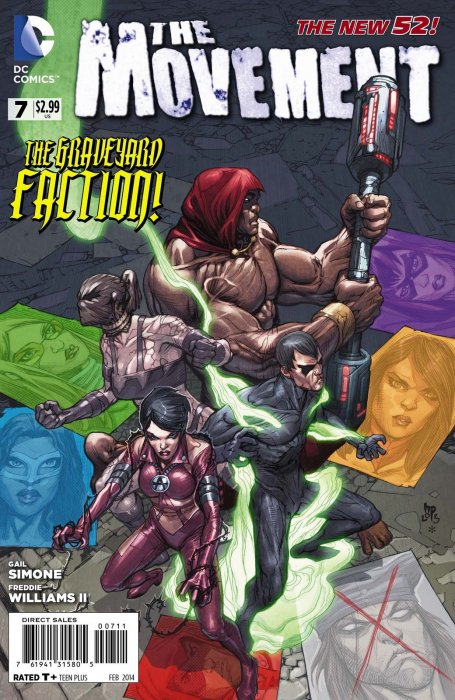 Yeah, I’m super-late, both on updating this blog in general, and finishing this series in particular. Well, it’s time to try and get caught up this weekend. So here we go starting off with the second-half of this highly underrated comic-book series. Picking up from where we left off, THE GRAVEYARD FACTION, the super-powered mercenaries hired by Jason Cannon (whom we have learned is also the father of the infamous Cornea Killer) have beaten Mouse into a coma. Katharsis and Tremor have found him, and they call Virtue to come help them get him to the hospital.

Officers Pena and Whitt have made it back to the police HQ and are gathering up a group of fellow officers to go back to the Sweatshop with them for some off-the-books rogue justice against the Movement. But they’re not the only ones headed for the Sweatship, as The Graveyard Faction are on their way to slaughter everyone. The only super-powered member of the Movement who is left to protect all the kids is Vengeance Moth, who takes center stage in this issue. We learn her real name (Drew), age (19), background (former drug addict) and why she’s in a wheelchair (muscular dystrophy).

So this issue jumps back and forth between three locations, the hospital, the police HQ, and the Sweatshop. At the hospital, the doctors rush to save Mouse, while Virtue calls in a favor from Captain Meers, who keeps any cops away from the place and provides her with some info about the Graveyard Faction. At the police HQ, Whitt is gathering his forces to go against the Movement, but Officer Yee arrives and is ready to stop them, even if he has to do it alone. But the most compelling story is at The Sweatshop, as Vengeance Moth does her best to assume the leadership position and protect the place on her own. I find that to be the most compelling story in this issue, as we Vengeance Moth internally trying to address and overcome her insecurities and fears, and you can see that’s herself she’s scared for, but for all the kids who are living in the Sweatshop. Like the other super-powered members of the Movement, this has become her new family, and she does not want to fail them. However, even with her impressive powers, she can’t quite overcome the Graveyard Faction, who are as vicious as they are bizarre. In the end her final hope is Burden, who believes he has been cured of his “demonic possession” due to the fake exorcism that Virtue performed on him last issue…

Another suspenseful and action-packed issue, with the just the right amount of dramatic tension. Highly recommend.