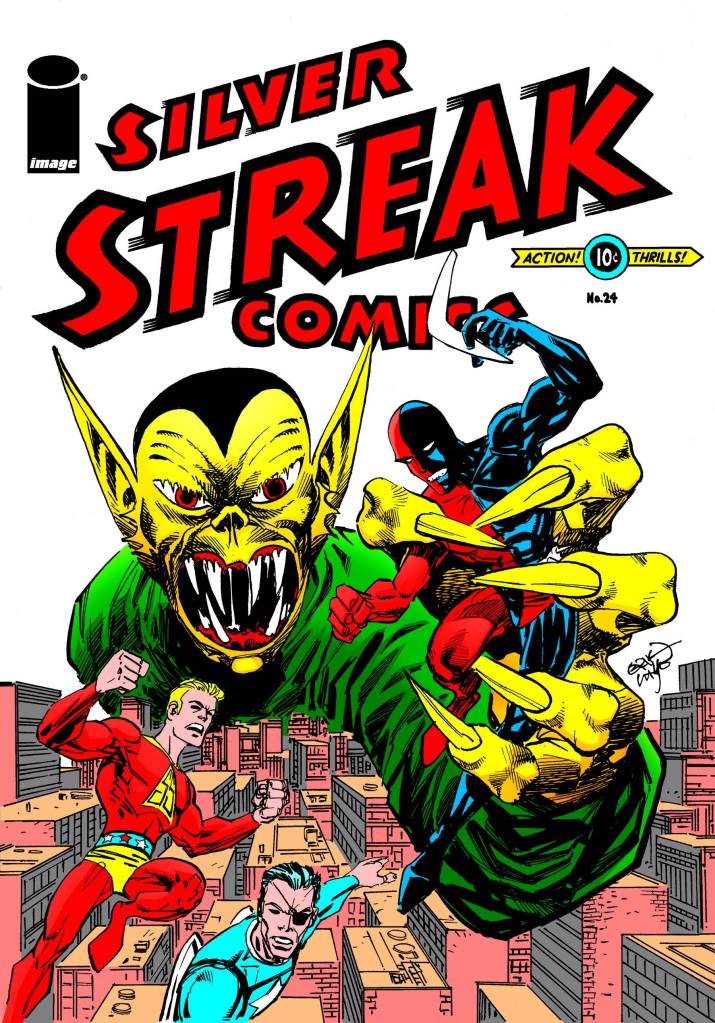 Silver Streak Comics was first published in 1939 by Lev Gleason Publications, and lasted 23 issues. In December 2009, Image Comics released this one-shot 24th issue as the 2nd installment in their Next Issue Project. This is a shorter issue (30 pages) with 5 stories.

1) DAREDEVIL
Written and drawn by Erik Larsen
No not THAT Daredevil, this is much earlier, and most forgotten character with that name. In this story, a bunch of kids bring Daredevil to a field at night where a mob of men are actually trying to burn a woman at the stake for being a witch. Daredevil must use his acrobatic skills (and his skill wielding a boomerang) to save the day. And, NO SPOILERS, but like most of the stories in the previous edition, there’s a twist at the end.

This is a great story. And, clearly, Larsen enjoyed writing this character, as he would later introduce him as a character in his SAVAGE DRAGON series.

2) SILVER STREAK
Written and drawn by Paul Grist
Silver Streak is notable not only for being created by the legendary Joe Simon, but also for being the 2nd ever superhero created whose main power was super speed, after THE FLASH. In this funny little story, Silver Streak is on the set of a live TV show, trying to prevent someone from murdering the star of the show. Thankfully Silver Streak is faster than a speeding bullet.

3) KELLY THE COP
By Joe Keatinge
This appears to be an original character. Kelly The Cop is a police officer who knows everyone and is well-liked in the neighborhood that he patrols every day. He’s known for his always cheerful personality, but this 1-page story packs an emotional punch.

4) CLAW…IN THE 21ST CENTURY
By Michael T. Gilbert
The Claw is a giant monstrous creature who rules his own Island nation and commits acts of global terrorism. This story makes fun of the difference in times between the 30’s and 40’s and today. Instead of spending his day terrorizing people, Claw finds himself dealing with lawyers, businessmen, and reporters, making him nostalgic for the “good old days.”

5) INFAMY
Written by Steve Horton and drawn by Alan Weiss
This story features Captain Battle and his son Captain Battle Jr. On December 7, 1941, they discover a possible super villain sneak attack on Pearlwwwwwwwwwwwwwwwwwwwwwww Harbor, and Captain Battle must use his high-tech equipment, including his jetpack, to stop it, commanding his son to stay behind because he doesn’t expect to survive. Very strong story.

This issue continued the tradition of coloring most of the stories so that they resembled cheap newsprint, like comic-books were published on back in the 40’s. It also continues some mock ads, that resemble those that were in old comics. Even though this is a shorter collection than the first issue, it is still a very good read, which I recommend.

As of this writing, this issue is also unavailable for sale digitally, so you would have to order a print copy to read it. It can be purchased via MIDTOWNCOMICS.COM